The Romans built Pons Aelius, a bridge  to cross the River Tyne, around 122AD. A fort was built there, eventually becoming known under the same name; Pons Aelius. The Roman fort was located at the site now occupied by the castle in Newcastle.  The fort and  settlement were thought to be at the original end of Hadrian's Wall, before it was extended out to Segedunum at Wallsend.

Pons Aelius (Latin for "Aelian Bridge"), or Newcastle Roman Fort, was an auxiliary castra and small Roman settlement on Hadrian's Wall in the Roman province of Britannia Inferior (northern England) and was situated on the north bank of the River Tyne close to the centre of present-day Newcastle upon Tyne.

Pons Aelius was a fort and Roman settlement at the original eastern end of Hadrian's Wall, at the site now occupied by The Castle, Newcastle. The Latin name means Aelian Bridge and can be traced back to when emperor Hadrian (whose family Nomen (clan name) was Aelius) visited Britain in AD 122 and first saw the need for a frontier wall.

The town's population is estimated to have been around 2,000. The fort is thought to have been , small by Roman standards. As Pons Aelius was a wall fort it is very likely a military road led from it and followed the Wall, linking its forts and milecastles.

The bridge and its fort were built at the north end Cade's Road, which is speculated to have run from Brough (East Riding of Yorkshire), to York (Eboracum) and the fort of Concangis (Chester-le-Street). Although the fort was to be the wall's east end, it was not long before the wall was extended to Segedunum (Wallsend). There is evidence to suggest the fort was rebuilt in stone, probably during the reign of the emperor Septimius Severus (AD 193–211). It is also suggested Pons Aelius may have been built to replace an earlier fort on the south side of the Tyne at Gateshead. If such a fort existed it has not yet been found.

The fort is mentioned once in the Notitia Dignitatum in the 4th/5th centuries; this is the only known literary reference. The bridge was the only one outside Rome named after an emperor, suggesting a particular importance. Strategically, the fort was sited here to guard the river-crossing, the first encampment being nearby at Condercum (Benwell, Tyne & Wear). It would have given the Roman Army an excellent view of the surrounding areas and it commanded an excellent position at the northern bridgehead. It is also unusual among other forts in being placed at the promontory at Newcastle. This would only allow it to use the west gate for dispersion of troops, while normally all four gates would be used.

Despite the bridge, the settlement of Pons Aelius was not important among the northern Roman settlements. The most important stations were those on the highway of Dere Street running from Eboracum (York) through Hadrian's Wall and to the lands north of the Wall. Corstopitum (Corbridge), being a big arsenal and supply centre, was much larger and populous than Pons Aelius.

The fort was abandoned around 400 AD and the site was built on by the Anglo-Saxons. Excavations in the 1970s to 1990s found over 600 Anglo-Saxon graves.

Much of the fort remains buried underneath the medieval Castle Keep. Few excavations have taken place and there is little to see due to the castle and surrounding city centre buildings being built over the fort's layout. However, the fort's praetorium, principia and two granaries are known to be in the environs of the castle, and their outlines can be seen marked out in stone adjacent to the castle keep. The remains of an original milecastle were found behind the Newcastle Arts Centre, just off the A186 Westgate Road. The precise line of Hadrian's Wall in the vicinity of the fort has not been found, so it is not known for example if the fort was attached to the Wall; the artist's impression above right shows a gap.

Excavations around the castle keep and dredging of the Tyne yielded finds typical of Roman encampments. Here they included pottery shards, engravings, seven altar stones, around eleven building inscriptions (one recording possible restoration of a bath-house outside the fort) and more recently a stone dedicated to empress Julia Domna dated 213 AD. The collection is housed at the Great North Museum: Hancock (formerly known as the Hancock Museum).

The altar stones and inscriptions suggest the gods worshipped included Jupiter (two altar-stones), mother goddesses, of which one relief shows three seated female figures, and Silvanus. Water-related gods such as Neptune and Oceanus have also been recovered, probably worshipped because of the fort's proximity to the river.

Some remains of the bridge were thought to have been discovered in 1872 during the construction of the Swing Bridge over the Tyne. There were two stone abutments and so far only two piers have been located, but ten are thought to have existed. The length of the Roman bridge from bank to bank is estimated to have been . Today however the precise location of the Roman bridge is not known.

Recovered inscriptions may have adorned the bridge. Two large altars are thought to have stood to either side of the road on the bridge's central pier, while a monumental inscription is thought to have been erected on a small archway, also on the central pier, under which all traffic on the bridge had to pass. These two altar-stones were dredged from the mud of the Tyne and are in remarkably good condition, which has led some scholars to believe they may have been ceremoniously dropped into the water from the bridge during some sort of dedication ceremony.

A possible detachment of the Legio VI Victrix (The Sixth "Victorious" Legion) may have resided here, although they were probably only responsible for building or rebuilding the fort in stone. This is known from altar stones. It is also mentioned on a dedicatory inscription which recorded reinforcements from the German provinces for Legio VI along with the other two British legions II Augusta and XX Valeria. These supplementary troops were necessary to bolster the island's garrison after losses incurred around AD150 when the northern tribes revolted, and may have arrived in the train of the governor Gnaeus Julius Verus circa 158, also mentioned on the stone.

A dedication to emperor Hadrian's mother, Domitia Paulina, attests the presence of the Cohors Ulpia Traiana Cugernorum civium Romanorum (The Cohort of Ulpian Cugerni, Trajan's Own) as evidently being stationed at Pons Aelius at the beginning of the third century. This particular unit was in Britain by 103 and was a quingenary unit (roughly around 500, but usually below 480) consisting of six centuries, although there is doubt that it would have had the additional four cavalry troops of an equitate cohort. They were originally recruited from the Cugerni tribe of the Lower Rhine in Germany.

The Notitia Dignitatum records the Cohors I Cornoviorum (The First Cohort of Cornovii) as being present at the fort in the beginning of the fifth century. These were raised from among the Cornovii tribe who inhabited Cheshire and Shropshire, and were the only native British unit known to have been stationed on Hadrian's Wall. They could have replaced the cohort listed above as this disappears from the records around this time. This unit above could well have been stationed here until the Roman withdrawal from Britain.

A stone tablet was found on the south side of Hanover Square in Newcastle that records the work of Cohors I Thracum on the vallum, but it is thought unlikely that this unit was ever permanently stationed here. If not they could have been stationed at a possible fort on the south side of the River Tyne, if such a fort existed at this time.

Text from Wikipedia, available under the Creative Commons Attribution-ShareAlike License (accessed: 26/11/2017).
Visit the page: Pons Aelius for references and further details. You can contribute to this article on Wikipedia.
Bridges River Tyne Hadrian's Wall Newcastle Castle Quick History of Newcastle and the North East Moot Hall Roman Period (43 to 409 AD)

Birdseye view of Pons Aelius
- An artist's impression of the fort and surrounding area from the south-east. Image by AncientVine. 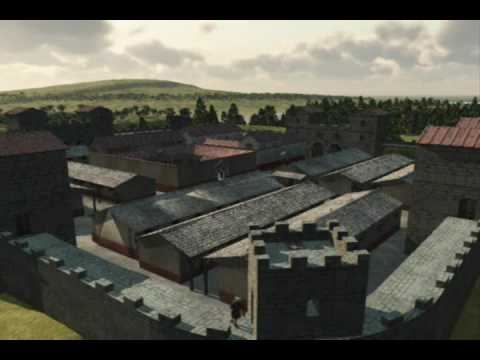 HER(204): Hadrian's Wall, Newcastle Fort (Pons Aelius)
- "The Notitia Dignitatum places the First Cohort of Cornovians (from Wroxeter area) at Pons Aelii. Aelius was the family name of Hadrian, and was used by Antoninus Pius and his ...

HER(450): Tyne Roman bridge
- "It is generally agreed that the name Pons Aelius applies to the fort of Newcastle, and indicates the existence of a bridge across the Tyne. In 1872, during the construction ...

Pons Aelivs: Hadrian's Wall Fort & Tyne Bridge
- "When the emperor Hadrian visited Britain in AD122 and the need for a continuous northern frontier wall was first envisioned, the eastern terminus was to be marked by a fort ... 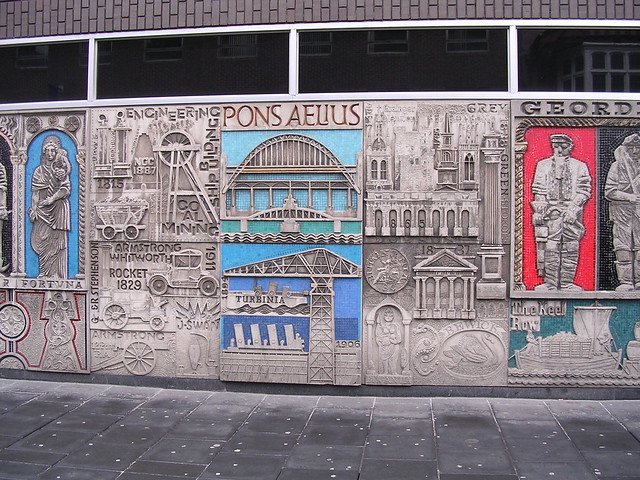 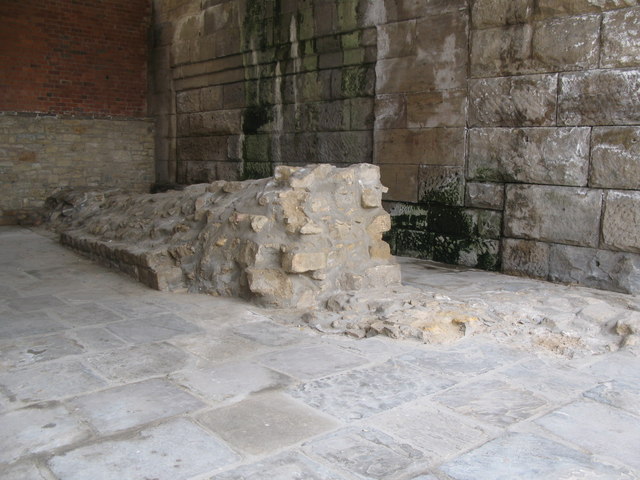 Birdseye view of Pons Aelius
- An artist's impression of the fort and surrounding area from the south-east. Image by AncientVine.

HER(204): Hadrian's Wall, Newcastle Fort (Pons Aelius)
- "The Notitia Dignitatum places the First Cohort of Cornovians (from Wroxeter area) at Pons Aelii. Aelius was the family name of Hadrian, and was used by Antoninus Pius and his ...

HER(450): Tyne Roman bridge
- "It is generally agreed that the name Pons Aelius applies to the fort of Newcastle, and indicates the existence of a bridge across the Tyne. In 1872, during the construction ...

Pons Aelivs: Hadrian's Wall Fort & Tyne Bridge
- "When the emperor Hadrian visited Britain in AD122 and the need for a continuous northern frontier wall was first envisioned, the eastern terminus was to be marked by a fort ...

Quick History of Newcastle and the North East