BROUGH, or BURG, under Stainmoor (St. Michael), a parish, in East ward and union, county of Westmorland; comprising the townships of Brough, Brough-Sowerby, and Hilbeck, and the chapelry of Stainmoor or Stainmore; and containing 1,694 inhabitants, of whom 899 are in the market-town of Brough, 8 miles (S.E. by E.) from Appleby, and 262 (N.N.W.) from London, on the high road to Glasgow. This town occupies the site of the ancient Verteroe or Veteris, where, towards the decline of the Roman empire in Britain, a prefect, with a band of directores, was stationed. It was partly built with the ruins of that fort, from which circumstance it probably derived its appellation; and is distinguished from other places of the same name by the affix of Stainmoor, from its vicinity to an extensive ridge of rocky mountains that separates this county from Yorkshire. It flourished as a place of considerable importance prior to the Conquest, soon after which a conspiracy was formed here, by the northern English, against the government of William. At what time the castle was erected is not precisely known; but in 1174 it was nearly demolished by William, King of Scotland, who laid waste the town: the building was subsequently restored, and, in 1521, was nearly destroyed by a fire that broke out after the celebration of a Christmas festival by Lord Clifford; it remained in a ruinous state till 1660, when it was repaired by Lady Ann Clifford, Countess Dowager of Pembroke. The fortress was situated upon an eminence, abruptly steep towards the north and west; and on the south and east, where the acclivity is more gentle, was defended by a ditch and a strong rampart. The remains consist of some massive towers, of which the keep, a large square tower with turrets at the angles, called Cæsar's Tower, was almost perfect in 1792, when the lower portion of one of the angles fell down, leaving the upper adhering by the cement only to the main building. Great part of it has within the last few years been removed, and the remainder is in a state of progressive dilapidation.

The town, divided into Market-Brough and Church-Brough, is pleasantly situated, and crossed by the Swindale beck, a tributary of the river Eden: it consists principally of one long street, the houses in which are rather commodious than handsome; the inhabitants are well supplied with water. Several of the females are employed in knitting white-yarn stockings. The market, granted in 1331, by Edward III., to Robert, Lord Clifford, is on Thursday, but is of little note; corn is admitted toll-free. Fairs are held on the Thursday before Whit-Sunday and September 30th, the latter of which, called Brough-Hill fair, is held on a common, two miles from the town, and is celebrated for the sale of linen and woollen cloth, wearing-apparel, articles of hardware, and live-stock; cattle-fairs are also held in the town, on the second Thursday in March and April. The Parish comprises by computation 20,000 acres, of which about one-half is inclosed and cultivated, and the remainder waste; the soil of the higher parts of the inclosed land, with the exception of a few portions of extremely fine quality, is sterile, and that of the lower portions rich and fertile, and equally adapted either for arable or pasture. The surface is varied with hills, and the lower grounds are watered by two small rivulets, of which one divides this parish from that of KirkbyStephen, and the other flows through the town, as already observed, into the river Eden. Coal is abundant; several mines are in operation for the supply of the neighbouring district, and there are quarries of freestone, limestone, and slate.

The parish was formerly a chapelry in Kirkby-Stephen. The living is a vicarage, valued in the king's books at £8. 8. 9.; net income, £492; patrons, the Provost and Fellows of Queen's College, Oxford, to whom the rectory and advowson were given at the request of Robert Egglesfield, founder of that college, and for several years rector of Brough. The church is a large handsome structure of great antiquity, to which a square embattled tower was added in 1513: the windows are ornamented with richly stained glass, which, from an inscription on one of them appears to be of the time of Henry VIII.; the pulpit is formed of one entire stone, and within the church are several interesting monuments. There is a chapel at Stainmoor, forming a separate incumbency. The Independents, Primitive Methodists, and Wesleyans have places of worship. The free school is endowed with £6. 18. 11., a portion of the revenue of a dissolved chantry and hospital founded in 1506 by John Brunskill, the former for two chaplains, one of whom was to instruct the children of the parish in grammar; the present building was erected by Lord Thanet. Many Roman coins and other antiquities have been found at various times near the castle, and, within the last thirty years, an earthen vessel full of silver quinarii, many of which are in good preservation. Cuthbert Buckle, lord mayor of London in 1593, was born at Brough. 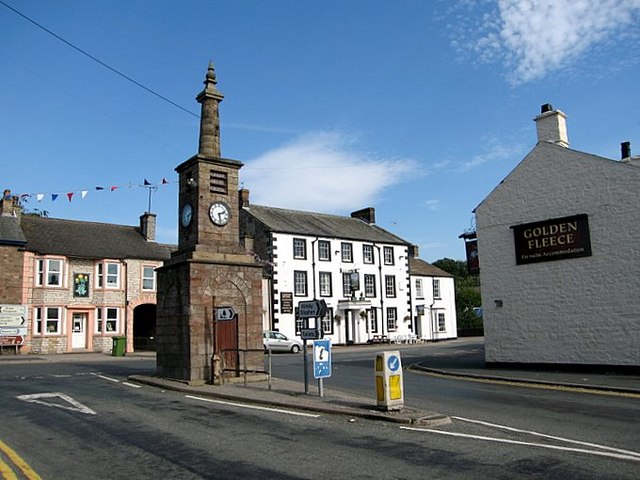 Brough
- Overview About Brough Map Street View &nbsp; Brough , sometimes known as Brough under Stainmore, is a village and civil parish in the Eden district of Cumbria, England, on the ...

Stainmore, 1848
- STAINMORE, a chapelry, in the parish of Brough, East ward and union, county of Westmorland, 4 miles (E.S.E.) from Brough; containing 611 inhabitants. The living is a perpetual curacy; net ...

Helbeck, Cumbria
- Overview Map Street View Helbeck is a distributed settlement and civil parish in the South Lakeland district of Cumbria. It is located just under a mile north of Brough. Helbeck ...

Brough
- Overview About Brough Map Street View &nbsp; Brough , sometimes known as Brough under Stainmore, is a village and civil parish in the Eden district of Cumbria, England, on the ...

Stainmore, 1848
- STAINMORE, a chapelry, in the parish of Brough, East ward and union, county of Westmorland, 4 miles (E.S.E.) from Brough; containing 611 inhabitants. The living is a perpetual curacy; net ...

Helbeck, Cumbria
- Overview Map Street View Helbeck is a distributed settlement and civil parish in the South Lakeland district of Cumbria. It is located just under a mile north of Brough. Helbeck ...