Regent Centre Interchange serves the Regent Centre business park in the Gosforth area of Newcastle upon Tyne, England. The transport interchange consists of a station on the Tyne and Wear Metro network's Green line, a well-served bus station and a 183 space car park.

It is heavily used by Regent Centre office workers and the students of the nearby Middle Schools and Academy, as well as shoppers using the nearby Asda store and Gosforth High Street.

The Interchange's location just west of the Great North Road through Gosforth was originally occupied by West Gosforth station, located on the Ponteland and Darras Hall Branch of the North Eastern Railway. Consisting of two side platforms, a simple pitched roof station building and a signal box, West Gosforth station opened on 1 June 1905, but closed to passengers on 17 June 1929 due to lower than expected passenger numbers and competition from bus services; goods services to the station continued until 14 August 1967.

What remained of West Gosforth station was demolished to make way for Regent Centre Interchange on the same site, and Metro services through Regent Centre commenced on 10 May 1981. The Interchange consists of a two platform station below street level covered by the station concourse, car park and bus station access road. A tall canopy covers the Metro station entrance and extends across the access road.

Apart from the removal of long-deactivated ticket barriers (and the installation of Pop Card validators) in the early 2010s, very few changes have been made to the station since its opening, and as such the interior remains very similar to Four Lane Ends, Jesmond and Heworth Metro stations.

Regent Centre was one of several Metro stations where classical music was played in an attempt to reduce incidents of anti-social behaviour. Although studies by operator Nexus showed that fewer young people loitered at these stations (one of the goals of the project), the initiative was eventually discontinued.

The interchange provides a 183 space car park as well as bus and metro train services allowing for a park and ride service.

Trains on the Green line towards South Hylton via Newcastle city centre (eastbound) and Airport station (westbound) serve the station roughly every 12 minutes throughout the day, and every 15 minutes on Sundays. However, up to eleven trains an hour in each direction serve the station during the morning and evening rush hours.

Some Metro services terminate at Regent Centre due to its proximity to the Metro depot, which is located between Regent Centre and South Gosforth. There is a siding to the west of the station used by trains to reverse, allowing them to begin a new eastbound journey or return empty to the depot.

The Regent Centre metro station is a sub surface station, with the platforms built underneath a busy road. However the ticket office is above ground and can be reached by going up a small set of stairs.

Regent Centre Interchange has regular local and regional bus services through Newcastle City Centre and its surrounding metropolitan areas, as well as services to towns in Northumberland.

The station exterior features a mural called Metro Morning created by Anthony Lowe, which was commissioned in 1988. It depicts passengers travelling in a representation of a Metro car.

The car park stairwell also features a mural called Have You Paid and Displayed? created by Nic Armstrong in 2001. It depicts the everyday lives of the car park's users and Metro passengers, set amongst contrasting landscape images. 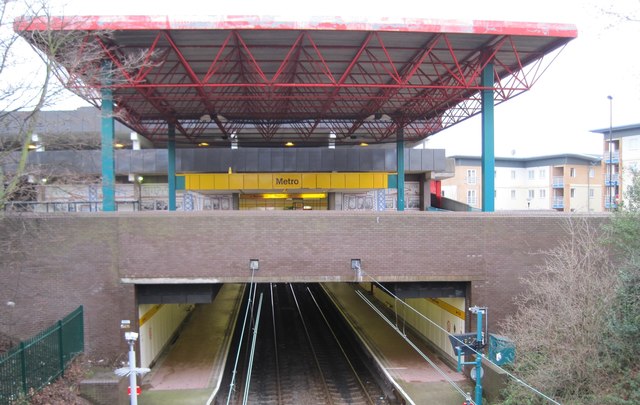