KENTMERE, a chapelry, in the parish, union, and ward of Kendal, county of Westmorland, 8 miles (N.N.W.) from Kendal; containing 198 inhabitants. This place derived its name from a mere or lake formed by the river Kent, which has its source a little to the north. The chapelry comprises by computation nearly 4,000 acres, and includes a narrow vale abounding with picturesque scenery; the lake was a broad expanse of water about a mile in length, surrounded by lofty fells which rendered it almost inaccessible, and though it has been recently drained, the spot has a singularly romantic appearance. The surface of the district is elevated, and strikingly diversified with hills, of which Hill-Bell is 2,700 feet above the level of the sea. Kentmere Hall, the ancient residence of the Gilpins, and now occupied as a farmhouse, is a lofty quadrangular tower, four stories in height, built of rude ragstone, and having a massive and venerable aspect. Edward Wilson, Esq., of Rigmaden Hall, and Francis Pearson, Esq., of Kirkby-Lonsdale, are joint lords of the manor. The game belongs to the lords of the fee, and so stringent are the covenants contained in the ancient enfranchisement deeds, that the tenants are thereby prohibited from keeping any dogs except sheep and cur dogs. Blue slate, and limestone of good quality, are extensively quarried. The chapel was built by subscription, and endowed with Queen Anne's Bounty: the living is a perpetual curacy; net income, £70; patrons, the Landowners. Over the summit of Hill-Bell was a Roman road, which may still be distinctly traced. Bernard Gilpin, the divine, was born at the Hall in 1517. 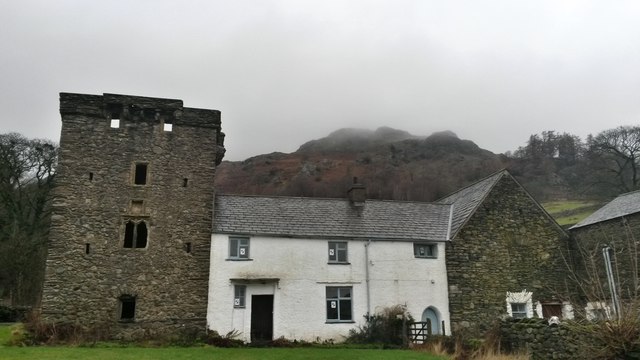