THE village of Earsdon is one of the most elevated spots near the coast, and its picturesque looking Church of St. Albans, is a conspicuous object from sea and land. The village is built upon the solid rock, and its street is on the very face of the sandstone bed. The church is comparatively modern, but the records of the sacred building go back to the beginning of the 11th century. Until about the year 1845 it was one of the largest parishes in England, "and was the Parish Church for Holywell, Hartley, Seaton Delaval, and Blyth. In this Churchyard were buried upwards of 170 of the unfortunate miners who lost their lives at Hartley Colliery in 1862; and on the spot is erected a granite obelisk, with the names of all the men and boys, with their ages, who were victims to the fatal accident. Inside the Church are several interesting tablets to the Fenwicks and Taylors, both families being originally natives of this pleasant village. There are also two ancient stained glass windows in the north and south of the nave, which bear the coat of arms of the Neville family. These windows are deserving of attention. 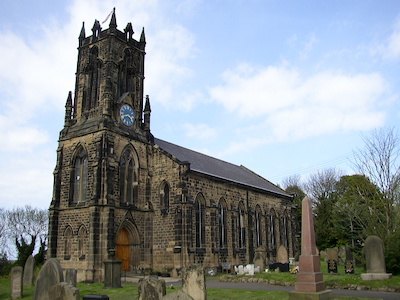 Church of St. Alban
- Overview Map Street View The Parish Church at Earsdon was built 1836-1837, on the site of a much earlier 13th century church. The church was designed by&nbsp;John &amp; Benjamin Green, ...

Church of St. Alban
- Overview Map Street View The Parish Church at Earsdon was built 1836-1837, on the site of a much earlier 13th century church. The church was designed by&nbsp;John &amp; Benjamin Green, ...