HAYDON, a chapelry, in the parish of Warden, union of Hexham, N.W. division of Tindale ward, S. division of Northumberland, 7 miles (W.) from Hexham, 27 (W.) from Newcastle-upon-Tyne, and 30 (E.) from Carlisle; containing 1,893 inhabitants. The village of Haydon-Bridge, situated on both sides of the South Tyne river, is in this chapelry, and is large and well built, and the scenery around it very beautiful: the bridge consists of six arches, two of which were rebuilt in 1733, and three of them in 1809; it has cost the county at various periods large sums of money, but is now substantially repaired. Two extensive land-sale collieries are in operation, as is also a foundry; and a mile south of Langley Castle, in a desolate situation, stand the laboratories for smelting and refining the ores of lead and zinc raised in the Alston mining districts, under the Commissioners of Greenwich Hospital, who are proprietors of a considerable portion of the chapelry, and owners of Hudgill-Burn mine. The Newcastle and Carlisle railway has a station here, immediately behind the chapel. Edward III., in 1344, granted permission to Anthony, Lord Lucy, then owner of the manor, to hold a market on Tuesday, and a fair on St. Mary Magdalene's day and the three following days, both of which have fallen into disuse

The present chapel, dedicated to St. Cuthbert, and forming a chapel of ease, was built in 1796, on a new site, near the north end of the bridge, given by the Governors of Greenwich Hospital: the old edifice, which was spacious and venerable, and situated on a conspicuous knoll commanding a wide prospect, still exists, but diminished in size, and partly decayed. There are places of worship for Independents and Wesleyans. In 1685, the Rev. John Shaftoe conveyed an estate, now producing £1,000 per annum, for the support of schools, which are conducted by a head master, two under masters, and two female teachers; the head master must be a clergyman of the Church of England, and to his duties were added, in 1819, the performance of divine service in Haydon chapel twice on each alternate Sunday. Mr. Shaftoe's trustees subsequently obtained an act of parliament empowering them to erect 20 almshouses, in which 20 men and women receive each half a crown weekly, with a limited quantity of coal, and a garment annually. The school-house is conspicuously seated on the brow of the right bank of the Tyne, and, with the almshouses, and additions of embattled walls, has a very peculiar appearance. The chapel of Langley stood on the south side of the river, perhaps on the ground called Chapel Hill, on which the school-house and almshouses now stand; it was suffered to grow into disuse when the bridge was built. The ruins of Langley Castle form a lone and solemn mass of building, consisting of an oblong square, 82 feet (within) from north to south, and 25 feet the other way, and flanked by a massy tower at each corner: the castle is mentioned in 1365 and 1368, in inquests respecting the Lucys. Threepwood, in the chapelry, was the birthplace, in 1769, of John Tweddell, the accomplished scholar and indefatigable traveller. 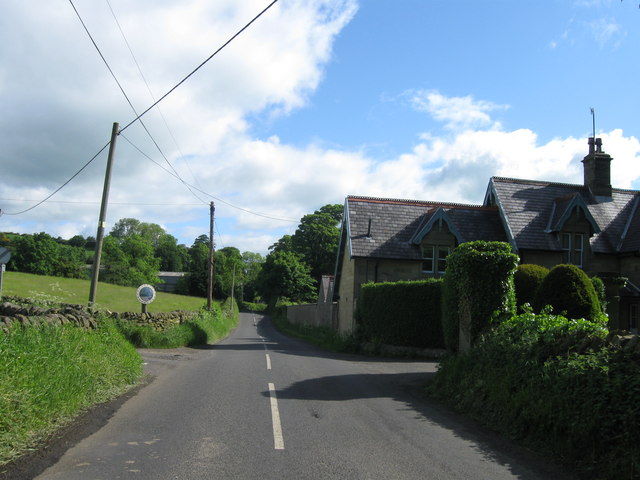