George Webster was an architect who practised in Kendal, in the county of Westmorland (now part of Cumbria).

George Webster (3 May 1797 – 16 April 1864) was an English architect who practised in Kendal, which was at the time in Westmorland, and later in Cumbria. All of his works were executed near his practice, and were located in Cumbria, in north Lancashire, and in the adjacent parts of Yorkshire. Most of his work was carried out on domestic buildings, but he also designed churches, and public and commercial buildings.

George Webster came from a family of builders aspiring to be architects, his father Francis (1767–1827) being described as a " mason, builder, and architect" whose speciality was the production of marble chimney-pieces and funerary monuments. It is not known how George received his architectural training, but he joined his father's business as a partner, and in 1818, when he was aged 21, he had produced his first known major design; this was for the country house of Read Hall in Lancashire.

Webster's works were geographically confined to the area around his office in Kendal, in what is now Cumbria, the northern parts of Lancashire, and the adjacent parts of Yorkshire. Most of his work was carried out on large houses; in designing new houses, altering and extending others, and designing associated structures such as lodges, gateways and terraces. Among his major new houses were Eshton Hall in Eshton, North Yorkshire (1825–27), and Underley Hall in Kirkby Lonsdale, Cumbria (1825–28). He remodelled, or made significant additions to Hutton in the Forest, near Skelton, Cumbria (1826), Dallam Tower, near Milnthorpe, Cumbria (1826), Bank Hall, Bretherton, Lancashire (1832–33), Conishead Priory near Ulverston (1838), and Holker Hall, (1838–41) (both the latter being in Cumbria). His earlier designs were mainly in Neoclassical (or Greek Revival) style, often incorporating Doric or Ionic porticos, for example Read Hall, and Esthwaite Lodge near Hawkshead, Cumbria (1819–21). Later he was a pioneer in the use of the Tudor Revival style, using either Elizabethan features, for example at Eshton Hall, or Jacobean features, as at Underley Hall, Penwortham Priory, Penwortham, Lancashire (1832, since demolished), and Bank Hall. Towards the end of his career he incorporated Italianate features, at for example Belsfield, Bowness-on-Windermere, Cumbria (1844) where he included a tower in the style of Osborne House.

Webster designed at least 13 new churches and remodelled others; these were always in early Gothic Revival style. Most of his country churches are small, but he also designed three larger churches in his home town of Kendal; of these, St Thomas (1835–37) has aisles and lancet windows, and St George (1838–41) is more ambitious with twin turrets at the west end. Both of these, and most if not all of his country churches, were built for the Anglican church. His third Kendal church, which the authors of the Buildings of England series consider to be the best of the three, is the Roman Catholic Church of Holy Trinity and St George (1835–37). Webster also designed public buildings, including town halls at Settle (1832), and Kendal (1859), commercial buildings, such as banks in Kendal (1834–35), and Ulverston (1836–38), and the Elba Monument near Burneside, Cumbria (1814).

In 1827 Webster married Eleanor Lowrey, with whom he had one son and four daughters. He was involved in the public life of Kendal,serving as mayor in 1829–30. One of his hobbies was collecting Roman coins, medals and antiquities, which possibly developed as a result of his visits to Italy from 1836. In 1845 he took his assistant of many years, Miles Thompson, into partnership, and then he virtually retired from the practice. 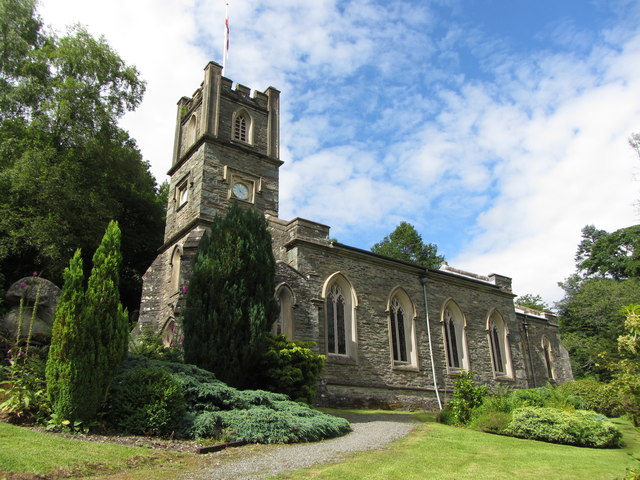 Church of St Mary, Rydal
- Overview Map Street View St Mary's is the parish church in Rydal. It was originally built as a chapel-of-ease in 1824, under the patronage of Lady le Fleming of Rydal ...

Church of St Mary, Rydal
- Overview Map Street View St Mary's is the parish church in Rydal. It was originally built as a chapel-of-ease in 1824, under the patronage of Lady le Fleming of Rydal ...