Charles Grey, 2nd Earl Grey was descended from a long-established Northumbrian family seated at Howick Hall. Aged just 22 Grey was elected to Parliament for the Northumberland constituency in 1786. He was an important member of the Whig party and was Prime Minister of the United Kingdom of Great Britain and Ireland from 1830 to 1834. He played a leading role in promoting the Representation of the People Act 1832,  ('the Great Reform Act'), the Slavery Abolition Act 1833, and introduced restrictions on the employment of children. He is commemorated by Grey Street and  Grey's Monument in Newcastle.  Earl Grey tea and Grey College, Durham are named after him.

A member of the Whig Party, he was a long-time leader of multiple reform movements, most famously the Reform Act 1832. His government also saw the abolition of slavery in the British Empire, in which the government purchased slaves from their owners in 1833. Grey was a strong opponent of the foreign and domestic policies of William Pitt the Younger in the 1790s. In 1807, he resigned as foreign secretary to protest the King's uncompromising rejection of Catholic Emancipation. Grey finally resigned in 1834 over disagreements in his cabinet regarding Ireland, and retired from politics. His biographer George Macaulay Trevelyan argues:

Earl Grey tea is named after him.

Descended from a long-established Northumbrian family seated at Howick Hall, Grey was the second but eldest surviving son of General Charles Grey KB (1729–1807) and his wife, Elizabeth (1743/4–1822), daughter of George Grey of Southwick, co. Durham. He had four brothers and two sisters. He was educated at Richmond School, followed by Eton and Trinity College, Cambridge, acquiring a facility in Latin and in English composition and declamation that enabled him to become one of the foremost parliamentary orators of his generation.

Grey was elected to Parliament for the Northumberland constituency on 14 September 1786, aged just 22. He became a part of the Whig circle of Charles James Fox, Richard Brinsley Sheridan, and the Prince of Wales, and soon became one of the major leaders of the Whig party. He was the youngest manager on the committee for prosecuting Warren Hastings. The Whig historian T. B. Macaulay wrote in 1841:

Grey was also noted for advocating Parliamentary reform and Catholic emancipation. His affair with the Duchess of Devonshire, herself an active political campaigner, did him little harm although it nearly caused her to be divorced by her husband. Lady Grey condoned the affair on the grounds that despite such occasional lapses, Grey was a good and loving husband and father.

In 1806, Grey, by then Lord Howick owing to his father's elevation to the peerage as Earl Grey, became a part of the Ministry of All the Talents (a coalition of Foxite Whigs, Grenvillites, and Addingtonites) as First Lord of the Admiralty.

Following Fox's death later that year, Howick took over both as Foreign Secretary and as leader of the Whigs. The ministry broke up when George III blocked Catholic Emancipation legislation and required that all ministers individually sign a pledge, which Howick refused to do, that they would not, "propose any further concessions to the Catholics."

The government fell from power the next year, and, after a brief period as a member of parliament for Appleby from May to July 1807, Howick went to the Lords, succeeding his father as Earl Grey. He continued in opposition for the next 23 years. There were times during this period when Grey came close to joining the Government. In 1811, the Prince Regent tried to court Grey and his ally William Grenville to join the Spencer Perceval ministry following the resignation of Lord Wellesley. Grey and Grenville declined because the Prince Regent refused to make concessions regarding Catholic Emancipation. Grey's relationship with the Prince was strained further when his estranged daughter and heiress, Princess Charlotte, turned to him for advice on how to avoid her father's choice of husband for her.

On the Napoleonic Wars, Grey took the standard Whig party line. After being initially enthused by the Spanish uprising against Napoleon, Grey became convinced of the French emperor's invincibility following the defeat and death of Sir John Moore, the leader of the British forces in the Peninsular War. Grey was then slow to recognise the military successes of Moore's successor, the Duke of Wellington. When Napoleon first abdicated in 1814, Grey objected to the restoration of the Bourbons, an authoritarian monarchy and when Napoleon was reinstalled the following year, he said that that was an internal French matter.

In 1826, believing that the Whig party no longer paid any attention to his opinions, Grey stood down as leader in favour of Lord Lansdowne. The following year, when Canning succeeded Lord Liverpool as Prime Minister, it was therefore Lansdowne and not Grey who was asked to join the Government which needed strengthening following the resignations of Robert Peel and the Duke of Wellington. When Wellington became Prime Minister in 1828, George IV (as the Prince Regent had become) singled out Grey as the one person he could not appoint to the Government.

In 1830, following the death of George IV and when the Duke of Wellington resigned on the question of Parliamentary reform, the Whigs finally returned to power, with Grey as Prime Minister. In 1831, he was made a member of the Order of the Garter. His term was a notable one, seeing passage of the Reform Act 1832, which finally saw the reform of the House of Commons, and the abolition of slavery throughout the British Empire in 1833. As the years had passed, however, Grey had become more conservative, and he was cautious about initiating more far-reaching reforms, particularly since he knew that the King was at best only a reluctant supporter of reform.

It was the issue of Ireland which precipitated the end of Grey's premiership in 1834. Lord Anglesey, the Viceroy of Ireland, preferred conciliatory reform including the partial redistribution of the income from the church tithe to the Catholic church and away from the established Protestant one, a policy known as “appropriation”. The Chief Secretary for Ireland, Lord Stanley, however, preferred coercive measures. The cabinet was divided and when Lord John Russell drew attention in the House of Commons to their differences over "appropriation", Stanley and others resigned. This triggered Grey to retire from public life, leaving Lord Melbourne as his successor. Unlike most politicians, he seems to have genuinely preferred a private life; colleagues remarked caustically that he threatened to resign at every setback.

Grey returned to Howick but kept a close eye on the policies of the new cabinet under Melbourne, whom he, and especially his family, regarded as a mere understudy until he began to act in ways of which they disapproved. Grey became more critical as the decade went on, being particularly inclined to see the hand of Daniel O'Connell behind the scenes and blaming Melbourne for subservience to the Radicals with whom he identified the Irish patriot. He made no allowances for Melbourne's need to keep the radicals on his side to preserve his shrinking majority in the Commons, and in particular he resented any slight on his own great achievement, the Reform Act, which he saw as a final solution of the question for the foreseeable future. He continually stressed its conservative nature. As he declared in his last great public speech, at the Grey Festival organised in his honour at Edinburgh in September 1834, its purpose was to strengthen and preserve the established constitution, to make it more acceptable to the people at large, and especially the middle classes, who had been the principal beneficiaries of the Reform Act, and to establish the principle that future changes would be gradual, "according to the increased intelligence of the people, and the necessities of the times". It was the speech of a conservative statesman.

On 18 November 1794, Grey married Mary Elizabeth Ponsonby (1776–1861), only daughter of William Ponsonby, 1st Baron Ponsonby of Imokilly and Hon. Louisa Molesworth. The marriage was a fruitful one; between 1796 and 1819 the couple had ten sons and six daughters:

He also has an illegitimate daughter with Georgiana Cavendish, Duchess of Devonshire:

Because Mary was frequently pregnant during their marriage, Grey travelled alone and had affairs with other women. Before he married Mary, his engagement to her nearly suffered because of his affair with Georgiana Cavendish, Duchess of Devonshire. The young Grey met Georgiana sometime in the late 1780s to early 1790s while attending a Whig society meeting in Devonshire House. Grey and Georgiana became lovers, and in 1791 she became pregnant. Grey wanted Georgiana to leave her husband the duke and live with him, but the duke told Georgiana if she did, she would never see her children again. Georgiana was sent to France, where she gave birth to a daughter on 20 February 1792 in Aix-en-Provence, whom she named Eliza Courtney. She returned to England with the child in September 1793, and she entrusted the child to Grey's parents, who raised her as though she were his sister.

Georgiana and Charles spent time with their daughter, who was informed of her true parentage some time after Georgiana's death in 1806. She married General Robert Ellice. Her maternal aunt, Henrietta Ponsonby, Countess of Bessborough, visited the Greys in 1808 (without knowing she was Eliza's aunt) and later wrote of her strange observations in which she stated "he (Charles) seems very fond of her". Eliza later named her youngest child Charles and named her eldest daughter Georgiana.

Grey spent his last years in contented, if sometimes fretful, retirement at Howick with his books, his family, and his dogs. The one great personal blow he suffered in old age was the death of his favourite grandson, Charles, at the age of 13. Grey became physically feeble in his last years and died quietly in his bed on 17 July 1845, forty-four years to the day since going to live at Howick. He was buried in the church there on the 26th in the presence of his family, close friends, and the labourers on his estate.

Charles Grey is portrayed by Dominic Cooper in the 2008 film The Duchess, directed by Saul Dibb and starring Keira Knightley and Ralph Fiennes. The film is based on Amanda Foreman's biography of Georgiana Cavendish, Duchess of Devonshire.

Earl Grey tea, a blend which uses bergamot oil to flavour the brew, is named after Grey.

Grey is commemorated by Grey's Monument in the centre of Newcastle upon Tyne, which consists of a statue of Lord Grey standing atop a high column. The monument was once struck by lightning and Earl Grey's head was seen lying in the gutter in Grey Street. The monument lends its name to Monument Metro station on the Tyne and Wear Metro (at that point effectively Newcastle's 'underground' system), located directly underneath. Grey Street in Newcastle upon Tyne and Grey College, Durham are also named after Grey. 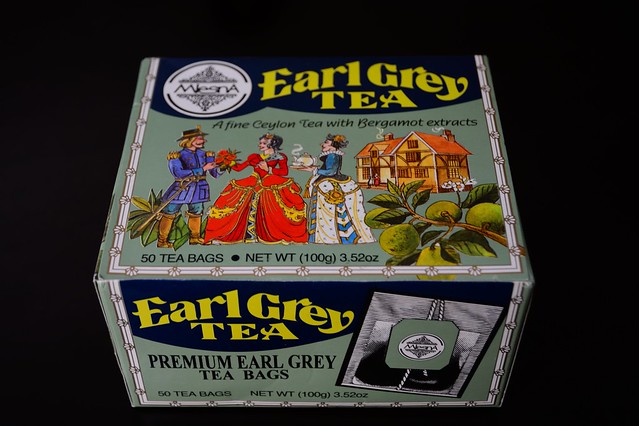 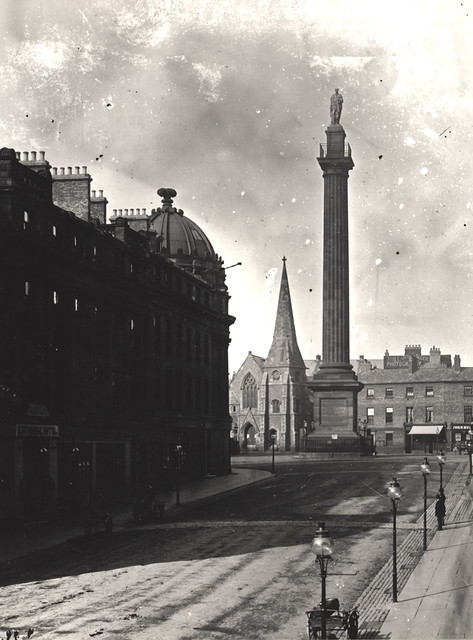 Earl on the Rooftops 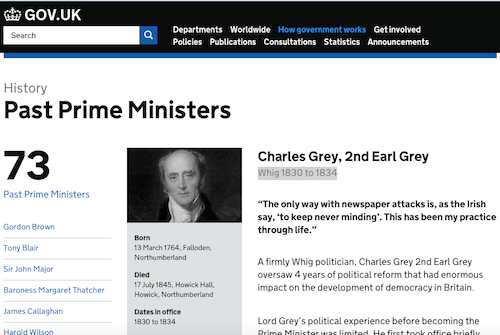 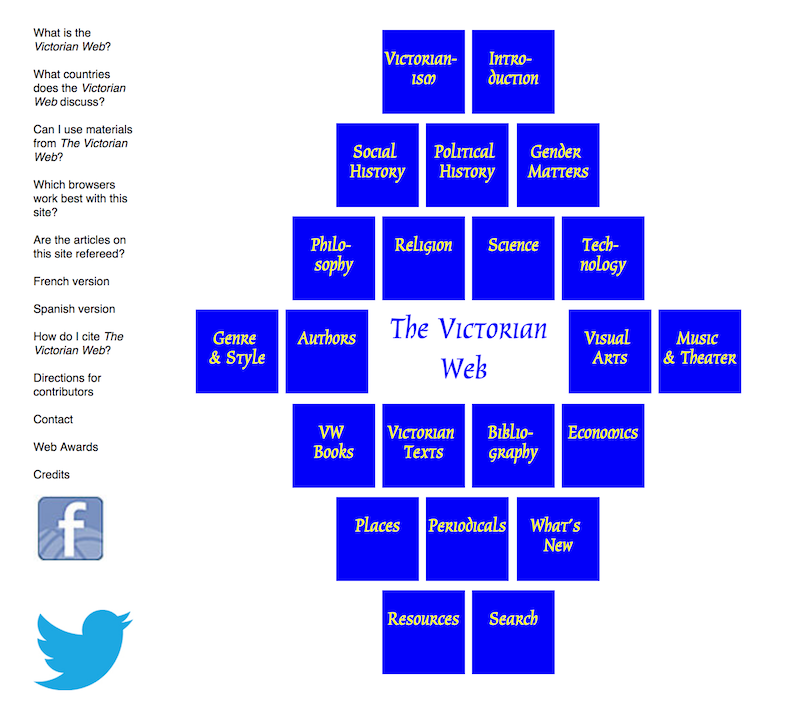 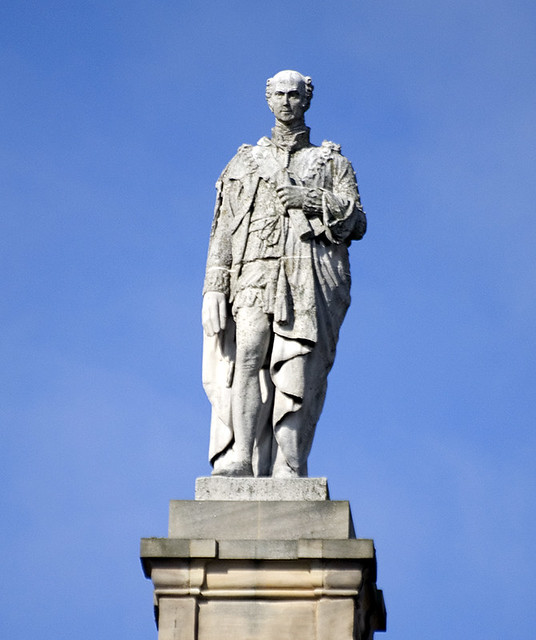 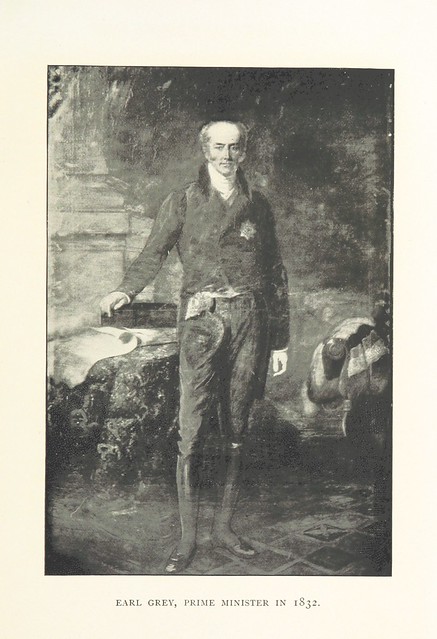 Image taken from page 329 of 'The History of the Literary and Philosophical Society of Newcastle-upon-Tyne, 1793-1896 ... With ... illustrations'

Earl on the Rooftops

Image taken from page 329 of 'The History of the Literary and Philosophical Society of Newcastle-upon-Tyne, 1793-1896 ... With ... illustrations'