BRANXTON, a parish, in the union of Glendale, W. division of Glendale ward, N. division of Northumberland, 4¾ miles (E.S.E.) from Coldstream, and 9¼ (N.W.) from Wooler; containing 261 inhabitants. This parish comprises by measurement 1,535 acres, and is situated about half a mile to the south of the road from Wooler to Coldstream. The battle of Flodden, in 1513, was principally fought here: the Earl of Surrey drew up his men, after crossing the Till, on the flat ground immediately under Kingchair or Kingshire Hill, the foot of which bounds the parish. The battle was hotly contested from the south to the north of Branxton, especially about the church and village, and thence to the north of the Wooler road. In Westfield, about 150 yards from the turnpike-road, on Sir Henry Askew's property, is an unhewn pillar of basalt, about five feet high, and more than three feet in diameter, commemorative of the battle; it is called the King's stone, and is said to point out the place where King James fell. In June 1524, a skirmish took place between the Lord of Fowberry, at the head of 100 cavalry, and a party of Scottish infantry, who, in number about 500, crossed the Tweed, for the purpose of plundering traders resorting to Berwick fair. There are several quarries of whinstone applicable for making roads and building farmhouses. The living is a vicarage, valued in the king's books at £3. 6. 8.; net income, £200; patrons, the Dean and Chapter of Durham; impropriators, the landowners. The glebe-house was built in 1838, and commands extensive prospects. The church was rebuilt in 1844, in the Norman style, at a cost of £500: a very ancient arch, supposed to be nearly 800 years old, and which divides the chancel from the nave, was preserved in the rebuilding. Some very fine jaspers and moss agates have been found; and swords and balls, some of which are in the possession of the Askew family, have been ploughed up at various times. The Rev. Percival Stockdale, a writer of considerable merit, was born here in 1733, during the incumbency of his father. 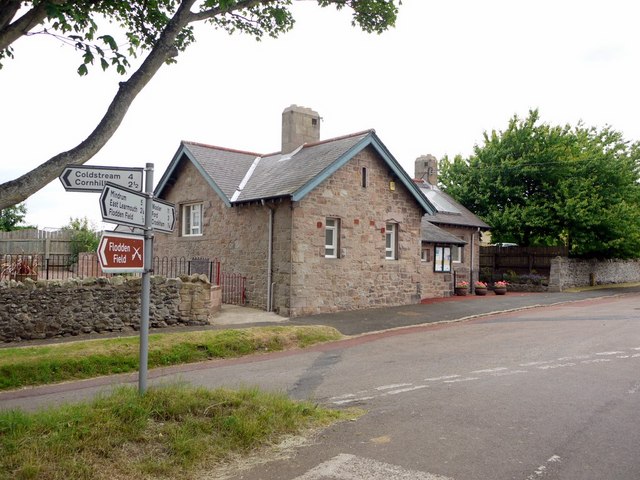 Branxton
- Overview About Branxton Map Street View Branxton is a village in Northumberland located just 3 miles from the England-Scotland border. The village is very close to the site of the ...

Branxton
- Overview About Branxton Map Street View Branxton is a village in Northumberland located just 3 miles from the England-Scotland border. The village is very close to the site of the ...