"Nothing is now visible of the fort at Benwell (Condercum) in Newcastle, which was occupied throughout most of the Roman period by the Asturian cavalry regiment from northern Spain. Its site is covered on the north side by a Victorian reservoir and to the south by streets of houses. To the south of the fort, however, is the only causeway (or permanent crossing) of the Vallum earthwork to be seen on the line of Hadrian's Wall. To its east is the temple of Antenociticus, which stood within the civilian settlement outside the fort." (English Heritage)

Condercum was a Roman fort on the site of the modern-day Condercum Estate in Benwell, a suburb of Newcastle upon Tyne, England. It was the third fort on Hadrian's Wall, after Segedunum (Wallsend) and Pons Aelius (Newcastle), and was situated on a hilltop to the west of the city. Today, nothing can be seen of the fort or its adjoining wall, as the site is covered by buildings and is bisected by the A186 Newcastle to Carlisle road, which follows the line of Hadrian's Wall. The remains of a small temple dedicated to Antenociticus, a local deity, can be seen nearby, and the original causeway over the vallum, or rear ditch, can also be seen. A modern-day Condercum Road marks the site.

The remains of the fort lie on Hadrian's Wall to the west of Newcastle. The fort measured from north to south by east to west and the defences enclosed an area of just over . It was a cavalry fort, and had three gates leading to the north of the wall. There were two side gates, facing east and west, through which the Roman military road, running along the south side of the wall, entered and exited. There was also a south-facing gate that led to a causeway that crossed the vallum. The causeway had a gateway, halfway across which was closed by doors. The fort contained a commandant’s house, headquarters, two granaries, workshops, barracks, stables and a hospital.

It is known from several building inscriptions that the defences of the fort at Benwell were built by soldiers from the Second Augustan Legion (Legio II Augusta). It is believed that it was built between 122 AD and 124 AD. Soldiers from the Twentieth Legion (Legio XX Valeria Victrix) were apparently responsible for some additional building or repair work at Benwell in the late-2nd century.

The fort contained two granaries, and it is known that these were built by a detachment from the British Fleet, probably because the legionnaires responsible for construction of the fort had been called away. It is likely that the detachment was sent from nearby Arbeia, in modern-day South Shields.

In the 2nd century Condercum was garrisoned by the Cohors I Vangionum Milliaria Equitata, which was a part-mounted unit from Upper Germany. This had a nominal strength of one thousand men, but it is likely that only half of this number occupied the fort. It is thought that from AD 205 to AD 367, a five-hundred-strong auxiliary cavalry unit (Ala Primae Hispanorum Asturum), from the Astures tribe in northern Spain, was stationed at the fort.

There is evidence that a village, or vicus, grew up around the fort, lying to the north and south of the vallum. The remains of three notable buildings were found near the fort.

A number of altar-stones have been found at the site, dedicated to various gods. Three of the altars were dedicated to Antenociticus, who is believed to be a Celtic deity.

A hundred yards to the east of the fort, the remains of a temple dedicated to Antenociticus, believed to be a local Celtic deity, can still be seen. The building, which was discovered in 1862, measures from east to west and from north to south, with an apse extending a further six feet on the south end. It is believed that the apse contained a life-size statue of the god, as a full size head was found, together with the fragments of an arm and a leg. The head was adorned with a Celtic neck torc. The temple also contained three altars to Antenociticus.

Three hundred yards to the southwest of the fort, a bathhouse was discovered in 1751. The building had several rooms, which were probably the hot and cold rooms and dressing rooms normally found in such bathhouses.

Just south of the vallum causeway, a third building was found. This was a large domestic building, believed to be a mansio, or resthouse for official travellers.

Text from Wikipedia, available under the Creative Commons Attribution-ShareAlike License (accessed: 26/08/2016).
Visit the page: Condercum for references and further details. You can contribute to this article on Wikipedia.
Hadrian's Wall English Heritage Roman Period (43 to 409 AD) Benwell, Historical Account, 1890 Benwell 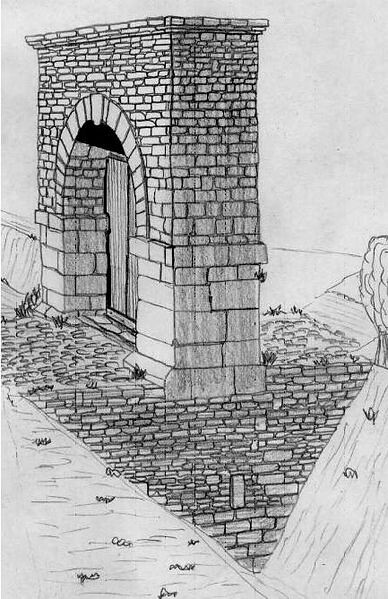 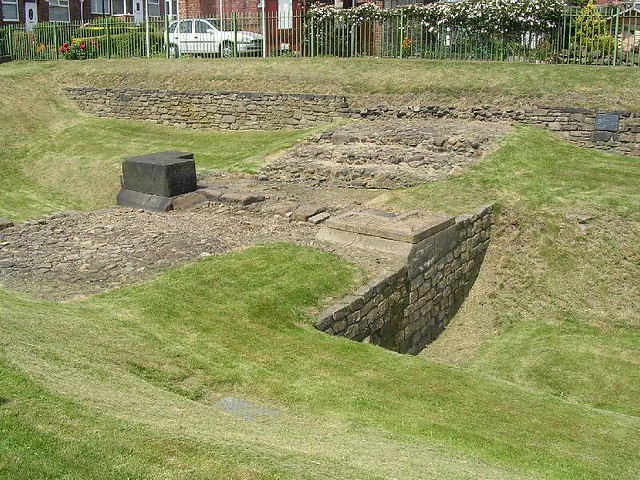 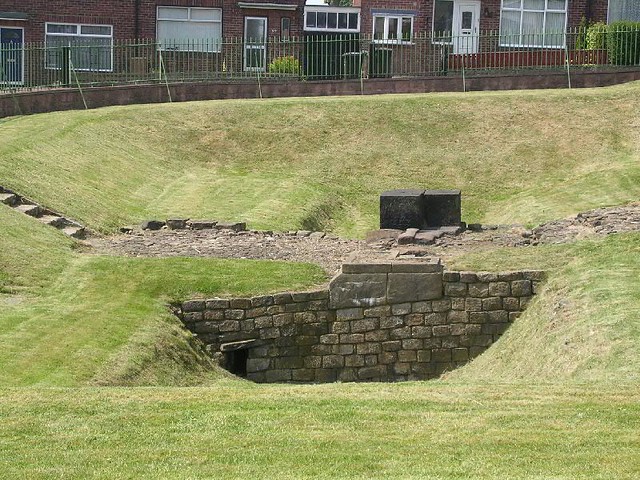 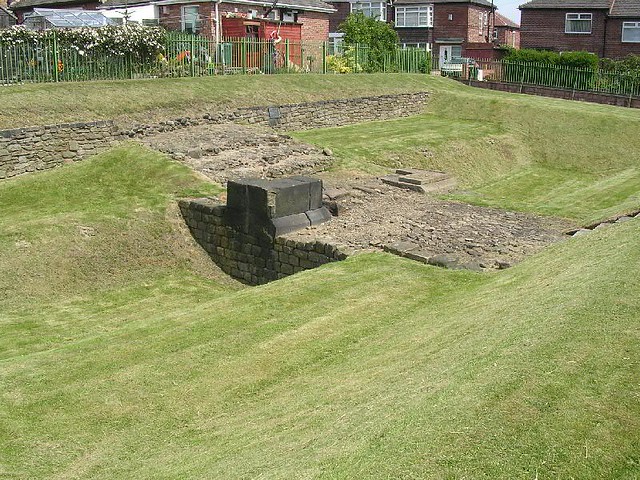 Tyne and Wear HER(5264): Benwell, Condercum Fort, Vallum crossing and gateway
- "The causeway across the vallum was located in 1932, excavated in 1933 by the North of England Committee and its examination and preservation completed in 1938. It was preserved and ... 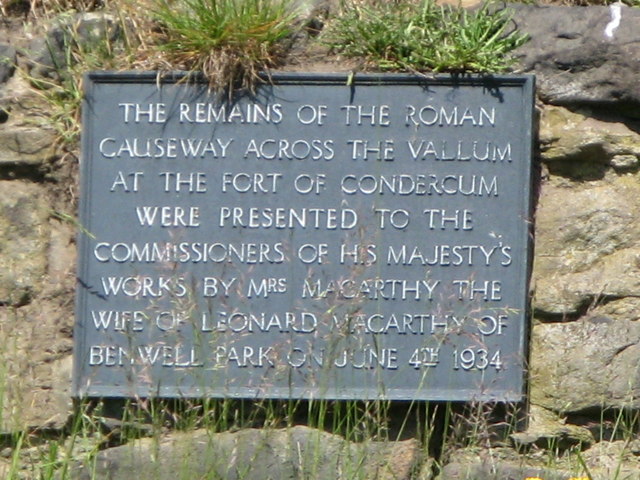 Plaque at the Vallum crossing at Benwell Fort
- Photo by Mike Quinn, 2008, and licensed for reuse under a Creative Commons Licence.

Tyne and Wear HER(5264): Benwell, Condercum Fort, Vallum crossing and gateway
- "The causeway across the vallum was located in 1932, excavated in 1933 by the North of England Committee and its examination and preservation completed in 1938. It was preserved and ...

Plaque at the Vallum crossing at Benwell Fort
- Photo by Mike Quinn, 2008, and licensed for reuse under a Creative Commons Licence.