Extract from: A Descriptive and Historical Account of the Town and County of Newcastle Upon Tyne: Including the Borough of Gateshead. Eneas Mackenzie, 1827.

This parish, which is about three miles square, is bounded on the north by Jarrow on the west by Boldon, on the south by Monk Wearmouth ,and on the east by the sea. It is divided into two townships, Whitburn and Cleadon. They maintain their poor jointly, but repair their highways separately, and each has a constable. The parish, in 1821, contained 150 houses and 856 inhabitants. The poor rates, in 1829, amounted to £393, 13s and the rental assessed to the county rate that year was £6309, 10s.

Whitburn - This small village, distant 3 miles north from Sunderland, is pleasantly situated on the southern acclivity of an eminence rising above 400 yards from a fine sandy bay, and commands a cheerful prospect to the south, extending beyond Hartlepool to the high cliff's on the Yorkshire coast. To the north of the village, the Lizard, a high dry, sheep walk, “commands a landscape not less varied than extensive: immediately to the south-east, Souter's Point, the most projecting point of land between the Wear and Tyne; the grotesque rocks of Marsden; and beyond a fine curve of the shore, and bold jutting headland, crowned with the shattered monastery of Tynemouth; and further still Hartley and the semi-isles at the mouth of its rivulet.”

This village has a more sheltered and comfortable appearance than most places on the bare eastern coast. The dry limestone underneath the soil is peculiarly favourable to vegetation, and many rare plants and beautiful flowers grow in the open air. The gardens also produce very early and excellent vegetables. Here are two day schools and a ladies’ boarding school, six farmsteads, two corn mills, three public houses, a small Methodist chapel, and several good houses, occupied by private families, or let to lodgers in the summer season. A benefit society was established here in 1795, which is under the patronage and direction of the Rev. Thomas Baker, who acts as president of the club, which includes a numerous body of members. The rectory-house stands delightfully embosomed in a cluster of lofty sycamores. It is a handsome and convenient edifice, erected in 1816 from a plan furnished by the present incumbent, and executed by Mr. Stokoe, architect of Newcastle. The front is of freestone, and all the walls are stoothed, and contain a thorough ventilation.

The church is an old Gothic structure, with a tower, surmounted by a short spire. It was lately repaired and altered, and is now a neat and comfortable place of worship. The old raftered roof of the nave is covered by a modern ceiling, the dim mullioned windows are modernized under square labels, the floor raised with lime rubbish, and the church warmed by a stove. The whole is very handsomely pewed.

The most singular monument in this church is mentioned by both Hutchinson and Surtees. Upon an altar tomb lies a recumbent effigy of a plump, stout, elderly gentleman, in the full stiff dress of 1689; a full periwig, neckcloth with square ends, coat with large buckramed skirts, wide sleeve,s rolled breeches, and square laced shoes, with huge bows of ribands; the head rests on a pillow, and the right hand holds the book open at the text, “I shall not lye here but rise;” there is a skull between the feet. On the uprights of the tomb are represented, in bas relief, the same figure kneeling, with a lady in a corresponding dress on each side of him; on the east and west uprights texts of scripture. A tablet, placed against the wall, informs us that this is “The burial place of Mr Michael Mathew of Cleadon, and his wife, who had issue three sons and two daughters, of which only Hannah survives.”

The glebe lies to the west of the village, and contains nearly 200 acres; and Sir H Williamson pays 10s. per annum for four riggs lying between the West Field and Lizards. The rector is entitled to tithes; generally throughout the parish excepting that a modus of 13s. 4d. is tendered every Easter Monday for Biddick farm in lieu of all tithe and 5s. for Pattison's Close in Cleadon; and saving the Gilly tithe, which pay only half tithe to the rector when in corn, but the whole tithe of every other kind. The Gilly-tithe lands include 494 acres, and are so called from having been the possession of St Giles of Kepyer. The sum of £6, 0s. 3d. is still paid annually to Kepyer School, as a modus in lieu of the other half tithe.

Whitburn and Cleadon, having been always members of the bishop's great manor of Chester-le-Street, few freehold estates of any consequence occur in either village. About the reign of Queen Elizabeth Leonard Pilkington rector of Whitburn, collected together a considerable copyhold estate in Whitburn, in various parcels which is now the property of Sir Hedworth Williamson.

Whitburn Hall is an old spacious mansion-house, which fronts to the south, and adjoins the rectory grounds on the west. It has been the seat of the Williamsons since the desertion of Monk Wearmouth, and part of it is said to have been built by the Pilkingtons before 1600.

Bents is a small hamlet on the sea shore near to Whitburn, where the fishing boats are moored, and where the bathing machines are stationed. It contains one farmhold, one public house, and a number of fishermen's cottages. There are usually ten fishing boats, carrying three men each, employed here, and the fish is generally sent to South Shields and Sunderland; but contracts are occasionally taken by the owners for supplying turbot for the London market.

Whitburn West House is a large single tenement, with a handsome avenue of elms, about half way betwixt Whitburn and Cleadon. 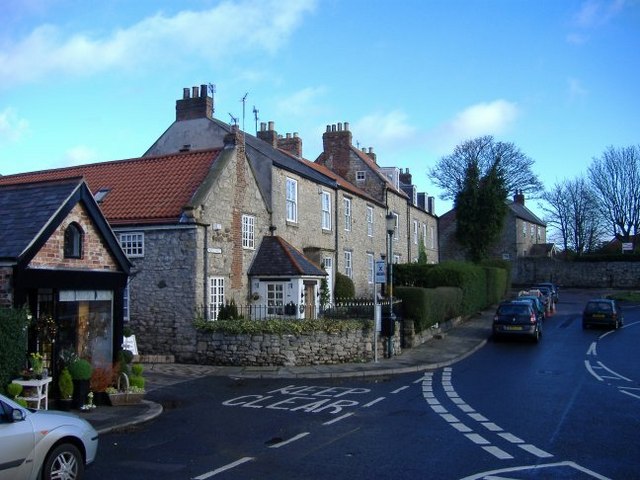