WHITBURN, a parish, divided into the townships of Whitburn and Cleadon, is 3½ miles north from Sunderland, 5 south from South Shields and 2 ½ from West Cleadon Lane station, on the Gateshead and Sunderland section of the North Eastern railway, in the Jarrow division of the county of Durham, east division of Chester-le-Street ward, petty sessional division, union and county court district of South Shields, rural deanery of Wearmouth and archdeaconry and diocese of Durham. The village of Whitburn is very pleasantly situated, a quarter of a mile from the German Ocean, and commands a fine sea view, as well as an extensive prospect of the surrounding country. Gas works were established in 1865, and the village is supplied with water by the Sunderland and South Shields Water Works Co. The parish church of St. Mary is a very ancient edifice of stone, in the Early English and Decorated styles, consisting of chancel, nave of five bays, aisles, vestry, organ chamber, and a western tower with short spire containing a clock and 2 bells of the 14th century date, dedicated respectively to, and bearing representations of, St. Andrew and the Virgin and Child, with inscriptions in Lombardic characters: there are thirteen stained windows, including one in the south aisle to the memory of Thomas Barnes, erected by his wife; in the north aisle is another to Dame Anne Elizabeth Williamson, d. 1878: there is also a very interesting and almost unique pointed oval window, and a low-side or leper window: the arcade on the south side is supposed to be the work of Bishop Pudsey: into the walls of the church are built some early mediaeval grave covers of great interest: the fine stone font and a lectern of carved oak were the gift of Arthur Fenwick esq. J.P.: there are sittings for 450 persons: at the entrance to the churchyard is a lych gate. The register dates from 1570. The living is a rectory, average tithe rent-charge £725, net yearly value £1,000, including 60 acres of glebe, with residence, in the gift of the Bishop of Durham, and held since 1881 by the .Rev. George Frederic Price D.D. formerly scholar and fellow of New College, Oxford. There is a mission room at Marsden and also a Wesleyan chapel. The cemetery of nearly four acres was formed at a cost of about £1,440 and is under the control of a burial board of 9 members. The Mechanics’ Institute at Whitburn was opened in 1881, and contains a library of 490 volumes. A reading room and library was opened at Marsden in 1886 and contains 250 volumes. Near here is Souter Point Lighthouse, which is illuminated with the electric light, showing a bright light of five seconds’ duration every half minute and there is a red and white fixed light, showing over Whitburn and Hendon Rocks: this station has also a fog horn, sounded for five seconds every 45 seconds; engineer in charge, James Gowing. At the coast guard station here every kind of apparatus is kept for saving life in case of shipwreck, and there is a Volunteer Rocket Company of 25 members. The Whitburn Coal Company have extensive works about a mile from here and limestone quarries at Marsden; they also own the Marsden railway, opened for passenger traffic in March 1888, from Marsden to Westoe lane, South Shields. Whitburn Hall, the seat of Sir Hedworth Williamson bart. D.L., J.P. situated in the centre of the village, is a fine and spacious mansion of some antiquity, from the grounds of which a good view is obtained of the German Ocean and Sunderland. The principal landowners are the Ecclesiastical Commissioners, Sir Hedworth Williamson bart. D.L., J.P. Charles William Anderson esq. J.P. of Sea View, South Shields, Henry Cooper Abbs esq. J.P. of Cleadon House, Cleadon, Mrs. Barnes and Joseph T. Foley esq. of Alston, and Robert Thompson esq. The soil is limestone and clay; subsoil, various. The chief crops are wheat and potatoes. The parish contains 4,250 acres: rateable value, £18,470; the population in 1881 was 2,024.

Marsden Rocks are situated in the parish of Whithorn, about midway between Sunderland and South Shields, a little to the north of Souter Point. The rocks are of a bold, precipitous and romantic character, and are the resort during the summer months of large numbers of people from the surrounding neighbourhood. The chief attraction is, however, the Marine Grotto, excavated by a plodding and industrious hermit named Peter Allen, who for nearly 24 years made it his abode, but of late years it has been used for the purpose of an hotel and restaurant for visitors. The excavations consist of a full suite of apartments and a large ball-room. Provisions and other goods are lowered through a shaft to the "Smuggler’s Cave" by means of a windlass, and the descent of pedestrians is by a zigzag flight of steps cut out of the rocks. The Grotto, which has been very useful on several occasions in sheltering shipwrecked mariners, is at present occupied by William Flawith as a licensed hotel. The sands in front, though of limited extent, are fine and sheltered. 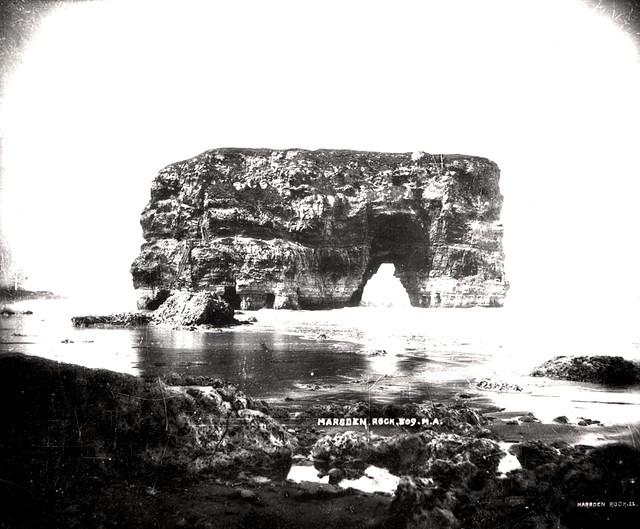 Marsden Rock
- Summary About Marsden Rock Map Street View Marsden Rock is a rock formation off the coast at Marsden, South Shields, opposite the Marsden Grotto. In 1911 a large section of ... 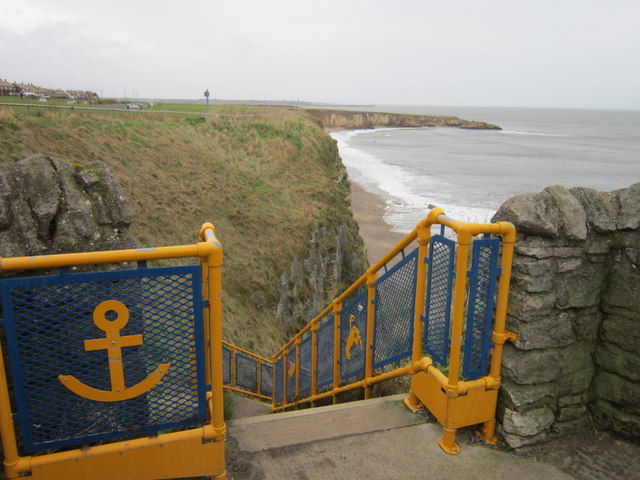 Cleadon, Historical Account, 1890
- Extract from: Kelly's Directory of Durham, 1890 Cleadon is a small village and township 3 &frac12; miles north from Sunderland, and the same distance south from South Shields. There is ...

Marsden Rock
- Summary About Marsden Rock Map Street View Marsden Rock is a rock formation off the coast at Marsden, South Shields, opposite the Marsden Grotto. In 1911 a large section of ...

Cleadon, Historical Account, 1890
- Extract from: Kelly's Directory of Durham, 1890 Cleadon is a small village and township 3 &frac12; miles north from Sunderland, and the same distance south from South Shields. There is ...