Story of the Monk's Stone 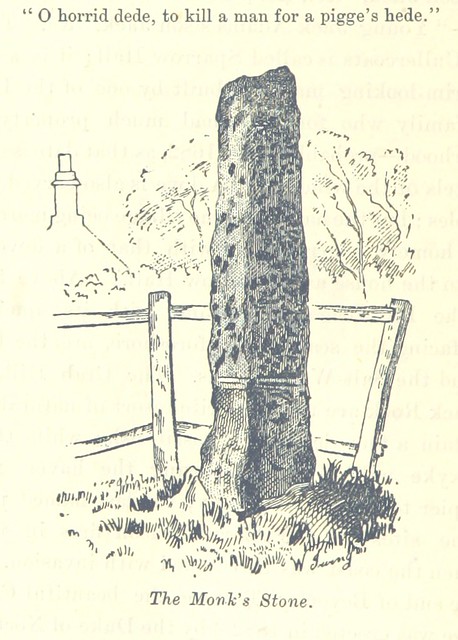 Among the many legends which have enriched the literature of Northumberland, the story of Lord Delaval's encounter with the Monk, is one of the oldest in northern romances. At a short distance from Cullercoats, infront of Monk House Farm, stands an old time worn, mutilated whinstone pillar, which is known as the " Monk's Stone." On one side of the pedestal was formerly inscribed in rude letters— "0 horrid dede, to kill a man for a pigge's hede."

Many conjectures have been made by plain matter of fact sort of people as to the original object of this ancient obelisk; that it was a boundary cross for the Sanctuary of Tynemouth, the same as those which were known to exist at Hexham, where, if once a fugitive from the law got within its radius, he was protected by the Church, to where—

Or that it was the Market Cross of the Monks of Tynemouth, such as were erected in the legal market places of the Church. But the popular and romantic history of the stone has for centuries been accepted as the true one. A Mendicant Monk of Tynemouth in one of his excursions into the country had reached the stately castle of the Delavals, being weary and hungry he entered the kitchen of the castle and demanded alms and refreshment. He was not content with the fare that was placed before him, and seeing a sucking pig being roasted before the fire for Delaval's return from a hunting excursion, the unscrupulous monk demanded part of it for his own consumption; the servants of the castle were aghast at such a bold request, and firmly declined to cut the roasting pig. The Monk, therefore, seized a knife, severed the pig's head from the body, insolently put it into his wallet, and left the castle for Tynemouth Priory. Not long after the Monk's departure, Delaval returned from his hunting, and was speedily informed of the calamity of the day—

"Lord Delaval was a baron bold,
And used to words of high command-
'By faith,' cried he, ' that monk shall hold
His own head in his greedy hand! '"

He then road off in pursuit of the thievish monk, and overtaking him about a mile from Tynemouth-

"But stay! But stay ! thou friar knave,
But stay and show to me,
What thouhast in that leathern poke,
Which thou mayst carry so high:-
Now Christ yesave,' said the friar knave,
'Firewood for the Priorie.'
' Thou leist ! thou liest ! thou knavish priest,
Thou liest unto me! - The knight he took the leathern poke,
And his boar's head did spie.
And still the reek from the scorched cheek
Did seem right savourie.
God's wot ! bu thad you seen the friar
With his skin of livid hue,
When the knight drew out there eking snout,
And flourishing his hunting thew,
Gram-mercie, gram-mercie! Sir Knight, on me,
As the Virgin will mercy have on thee.
But the knight he banged the friar about,
And beat his hide full sore;
And he beat him as he rolled on the sward,
Till the friar did loudly roar,
No mote he spare the friar man,
Than Mahound on Eastern shore.
'Now take ye that, ye dog of amonk,
Now take ye that from me,'—
And away rode the knight ingrit delight
At his feat of flagel lrie."

The monk was just able to crawl home to his cell in the Priory, where, after lingering a short time, he died. The Church was alarmed, and took up the case of the murdered monk.

"His holy hands the Prior wrung,
Upon his knees himself he flung,
And cried aloud,'O horrid deed!
To kill a monk for a pig's hede'."

The Church called upon Delaval for restitution and penance, which in the end he gave —

"Clothed in a robe both coarse and dark,
With humbled head and naked feet,
He passed 'mid eager crowds who mark
His penance for the horrid deed.
He knelt before the holy Prior,
One hasty glance he cast about,
His dark eye glowed ike flaming fire,
As though his soul woulde'en burnout.
He gave broad lands upon the Tyne,
Upon the bier his gold he laid,
He kissed fair Tynemouth's holy shrine,
And craved forgiveness for the deed."

Delavalhad thus satisfied the demands of the Church, and returned to the Castle of his fair domain, a sadder and wiser man.

"Now to this day, while years roll on,
And the knight doth coldly lie,
The stone doth stand on the silent land
To tell en the strangers nigh,
That a horrid deed for apig's hede
Did thence to heavenward cry."

There is also an old tradition to the effect that the ghost of the murdered monk visits the place each Christmas Eve; which maybe taken as a fulfilment of the monkish rhyme. In this version of the story, the monk lost his head as well as the pig's.

"0, cursen blacke and crulle dede,
To kill a monk for a pig's hede.
On Christmas Eve for years to come,
Around ye stone shall frighten' drun,
Ye gastly form of a headless trunk,
Clothed in ye garb of a holy monk,
And Delavals' souls, both son and sire,
Shall see in their dreams ye bleeding friar,
And never again shall their souls rest,
Till ye foul crime is full redrest."

Image taken from page 52 of 'Illustrated Handbook to the rivers Tyne, Blyth, and Wansbeck, etc'

Image taken from page 52 of 'Illustrated Handbook to the rivers Tyne, Blyth, and Wansbeck, etc'