Sizergh Castle and Garden is a stately home and garden at Helsington in the English county of Cumbria, about 4 miles (6 km) south of Kendal. The castle, a grade I listed building, is in the care of the National Trust along with its garden and estate. It is the home of the Hornyold-Strickland family.

In 2016 the Sizergh estate was included in the newly extended Lake District National Park.

The earliest part of the building is a tower of fourteenth or fifteenth century date.

There are oak-panelled interiors, including the Inlaid Chamber, where the panelling is inlaid with floral and geometric patterns in pale

poplar and dark bog-oak. The contents of the Inlaid Chamber were sold to the Victoria and Albert Museum (V&A) in the 1890s and it was displayed as a reconstructed period room.

The return of the panelling to its original location at Sizergh was advocated by among others Mark Girouard, an authority on England's country houses. The panelling returned in 1999 under a long-term loan. In 2017 it was reported that transfer of ownership to the National Trust had been made formal.

The bargeboards probably date from the seventeenth century.

The Castle contains a variety of paintings, including the following:

The Deincourt family owned this land from the 1170s. On the marriage of Elizabeth Deincourt to Sir William de Stirkeland in 1239, the estate passed into the hands of what became the Strickland family, who owned it until it was gifted to the National Trust in 1950 by Gerald Strickland, 1st Baron Strickland's grandson Lt. Cdr. Thomas Hornyold-Strickland, 7th Count della Catena.

Catherine Parr, the sixth wife of Henry VIII and a relative of the Stricklands, is thought to have lived here after her first husband died in 1533. Catherine's second husband, Lord Latymer, was kin to the dowager Lady Strickland.

It was extended in Elizabethan times. Sir Thomas Strickland went into exile with James II.

Around 1770, the great hall was again expanded in the Georgian style.

The Castle was featured in the ITV documentary Inside the National Trust.

A room, now restored and known as the Inlaid Chamber, is the subject of Letitia Elizabeth Landon's poem The Queen’s Room, Sizergh Hall, Westmorland published in 1835.

The garden has a lake and a kitchen garden as well as an award-winning rock garden. The rock garden, which was constructed in the 1920s, is the largest limestone rock garden belonging to the National Trust.

Sizergh houses part of the National Collection of ferns which are to be seen in the rock garden, the stumpery and the orchard.

In 1336 a grant from Edward III allowed Sir Walter Strickland to enclose the land around Sizergh as his exclusive park.

There are various types of habitat on the estate. For example, in 2014 it was reported that 35 ha of wetland habitat was being created in the Lyth Valley on the western edge of the estate. The project received funding from Natural England as part of a higher level stewardship scheme. It is hoped to attract bittern and other wildlife.

Sizergh has received support from the Morecambe Bay Nature Improvement Area which was launched in 2012. It received three years of government grant funding (2012–15). Projects continue under the auspices of the Morecambe Bay Partnership, a registered charity.

The Sizergh estate is a good place to see birds. For example, hawfinches are attracted to the area because of its hornbeam trees, and these birds sometimes come close to the main car park.

Fritillary butterflies live on the estate.

Text from Wikipedia, available under the Creative Commons Attribution-ShareAlike License (accessed: 23/11/2020).
Visit the page: Sizergh Castle and Garden for references and further details. You can contribute to this article on Wikipedia.
Sizergh Historic Buildings and Monuments in Helsington Civil Parish National Trust Grade I Listed The Great Barn, Sizergh Castle 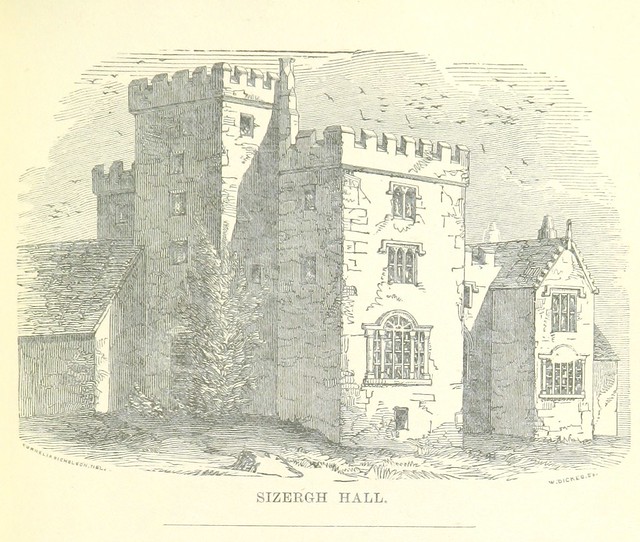 Image taken from page 29 of 'Burneside Hall, a border fort; with a glimpse of the Border Wars. A lecture. (Sir Allan Bellinghame of Burneside, and the Ladye Isabelle, of Sizergh. A ballad.)' 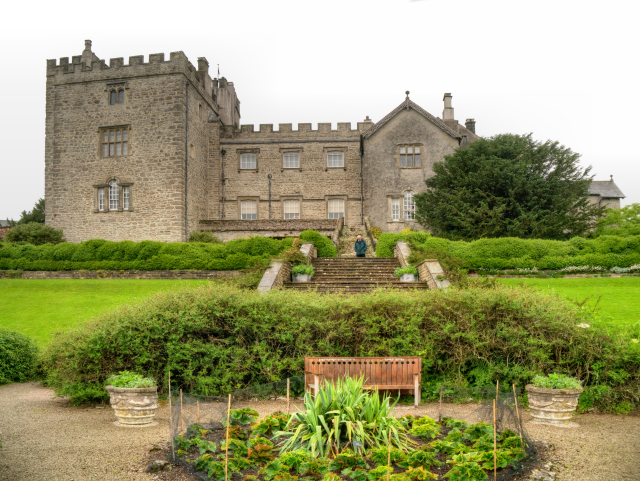 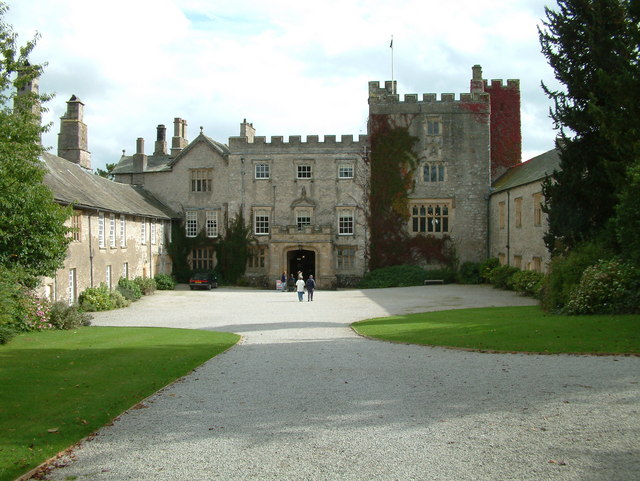 SIZERGH CASTLE - List Entry
- "Castle. South Tower, probably C15, (previously thought to be C14 and the earliest building on the site) appears to have been added to earlier hall with crosswing which forms the ...

Image taken from page 29 of 'Burneside Hall, a border fort; with a glimpse of the Border Wars. A lecture. (Sir Allan Bellinghame of Burneside, and the Ladye Isabelle, of Sizergh. A ballad.)'

SIZERGH CASTLE - List Entry
- "Castle. South Tower, probably C15, (previously thought to be C14 and the earliest building on the site) appears to have been added to earlier hall with crosswing which forms the ...