Sir (Thomas) Hugh Bell (1844 - 1931) was a director of his family's steelworks business at Middlesbrough; Bell Brothers. He was also a director of the North Eastern Railway, and had a private platform on the line between Middlesbrough and Redcar at his house Red Barns. Bell was mayor of Middlesbrough three times, High Sheriff of Durham in 1895, Justice of the Peace, and had a range of other civic rolls. Bell had 5 children, including Gertrude Bell, who became a famous explorer and diplomat. Bell's second wife, Florence, wrote "At the Works", documenting the growth of Middlesbrough and it's industry.

Sir (Thomas) Hugh Bell, 2nd Baronet CB JP FSA (10 February 1844 – 29 June 1931) was mayor of Middlesbrough three times – in 1874, 1883 and 1911 – High Sheriff of Durham 1895, Justice of the Peace, Deputy Lieutenant of County Durham, Lord Lieutenant of the North Riding of Yorkshire. He joined his family firm, Bell Brothers, and became director of its steelworks at Middlesbrough. Sir Hugh was appointed a Companion of the Order of the Bath (CB) in the 1918 Birthday Honours.

Bell was educated at Edinburgh, the Sorbonne university in Paris, and in Germany. When he was 18 he was obliged by his father to work at the family's Bell Brothers Ironworks at Walker, Newcastle. He was then made the director of the family's other large factory, the steelworks at Middlesbrough.

Bell was, like his father, a director of the North Eastern Railway, and had a private platform on the line between Middlesbrough and Redcar at the bottom of his garden at his house Red Barns. He was treated as royalty by the railway. His daughter, Lady Richmond, recalled saying goodbye to her father at King's Cross. He stayed with her on the platform to chat until the train left. When the train did not leave on time they went on talking, until at last a guard came up to them and said "If you would like to finish your conversation, Sir Hugh, we will then be ready to depart." He was no ordinary capitalist and mill owner, but made sure his workers were well paid and cared for.

His friendship with the architect Philip Webb led to three commissions in the Middlesbrough area – of Rounton Grange (demolished in 1953), Red Barns House and the Dorman Long office building (originally Bell Brothers) in Middlesbrough (Webb's only commercial development).

He was the son of the wealthy pioneering ironmaster Lowthian Bell and his wife, Margaret Pattinson. He married Maria Shield on 23 April 1867 and they had two children:

Upon the death of his first wife on 19 April 1871, he married, secondly, Florence Olliffe (later Dame Florence Bell, DBE), a daughter of Sir Joseph Olliffe.

With Florence he had three children: 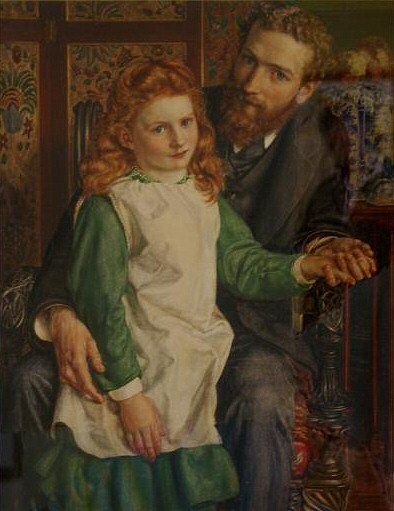