Florence Eveleen Eleanore Olliffe was born on the 9th September, 1851. She became a writer and playwright, and married Sir Hugh Bell, a Middlesbrough Ironmaster. One of her books "At the Works" (1911) described the rapid growth of Middlesbrough and it's manufacturing industry. Florence Bell's activities with the wives of Bolckow Vaughan ironworkers in Eston, is thought to have influenced her step-daughter, Gurtrude Bell, who later promoted the education of Iraqi women. Florence Bell died at her home in Chelsea on the 16 of May 1930.
Dame Florence Eveleen Eleanore Bell DBE JP (née Olliffe; 9 September 1851 - 16 May 1930) was a British writer and playwright.

The daughter of Irish-born Joseph Francis Olliffe (later Sir Joseph Olliffe) and the former Laura Cubitt, she was the second wife of 2nd Baronet Bell of Rounton Grange, and was styled Lady Florence Bell; the couple had three children:

In 1918 Florence Bell was created a Dame Commander of the Order of the British Empire (DBE). Dame Florence Bell died on 16 May 1930 at her home, 95 Sloane Street, Chelsea. 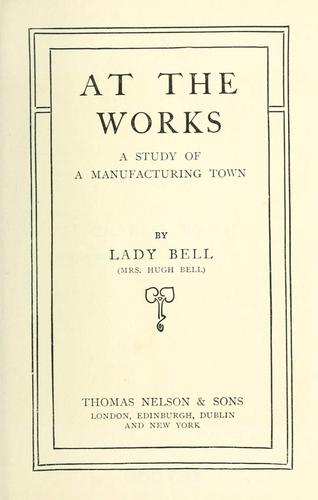