The Royal Tweed Bridge in Berwick-upon-Tweed was officially opened by the Prince of Wales on 16th May 1928. Grade 2* listed.

The Royal Tweed Bridge is a road bridge in Berwick-upon-Tweed, Northumberland, England crossing the River Tweed. It was intended to divert traffic from the 17th century Berwick Bridge, and until the 1980s it formed part of the A1 road, the main route from London to Edinburgh. However, the construction of the A1 River Tweed Bridge to the west of Berwick has since reduced the Royal Tweed Bridge's importance.

It was designed by L.G. Mouchel & Partners, with consulting engineers Charles Bressey and J. H. Bean, and the contractors for construction were Holloway Brothers of London.

It was built to supplement the older Berwick Bridge a short distance downstream, which still carries road traffic. A bridge has first been proposed in 1896, and a scheme was produced in 1914, but the outbreak of the First World War meant that plans were put on hold until 1924. A seven arched stone bridge was proposed at this time, but eventually the concrete design was decided upon.

The bridge was repaired in 1980, as it had been damaged by de-icing salt and its proximity to the sea. The A1 River Tweed Bridge, which opened in 1984, now carries the A1 road about a mile to the west of the Royal Tweed Bridge, reducing its importance as a crossing of the Tweed.

It is a Grade II* listed building in recognition of its innovative design and striking scale.

The bridge is built from reinforced concrete and consists of four unequal arches, with approach viaducts at each end. The northern end of the bridge is higher, and towards that end the spans are longer.

The spans are of lengths 50.1 metres (164 ft), 74.4 metres (244 ft), 95.5 metres (313 ft) and 108.5 metres (356 ft), and the approach viaducts are 60 metres (200 ft) and 44 metres (144 ft) long. The spans consist of four arched ribs, solid in the case of the shortest span and hollow for the longer spans. Columns rise from the ribs and are connected at the top by longitudinal beams, which support perpendicular beams that carry the roadway. The piers and abutments are constructed from mass concrete, and there are expansion joints and a system of wind braces over each of the piers.

The parapets are made of dressed sandstone, and there are cast iron lamposts on either side of the roadway.

At the time of its construction, it held the record for the longest single concrete span in the UK.

Text from Wikipedia, available under the Creative Commons Attribution-ShareAlike License (accessed: 29/07/2016).
Visit the page: Royal Tweed Bridge for references and further details. You can contribute to this article on Wikipedia.
Berwick upon Tweed Grade II* Listed River Tweed 1928 Tweedmouth Bridges 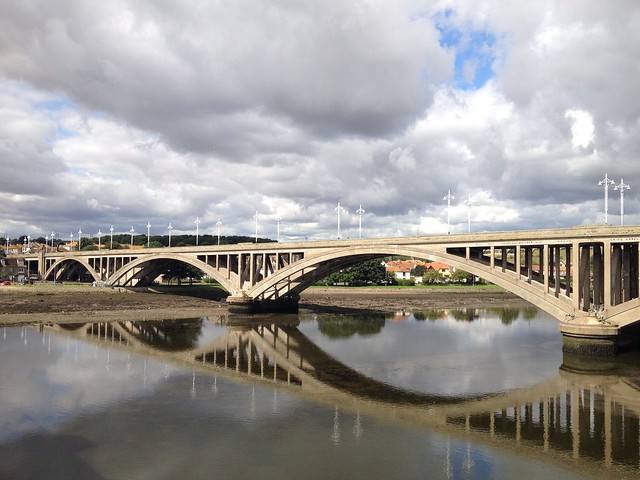 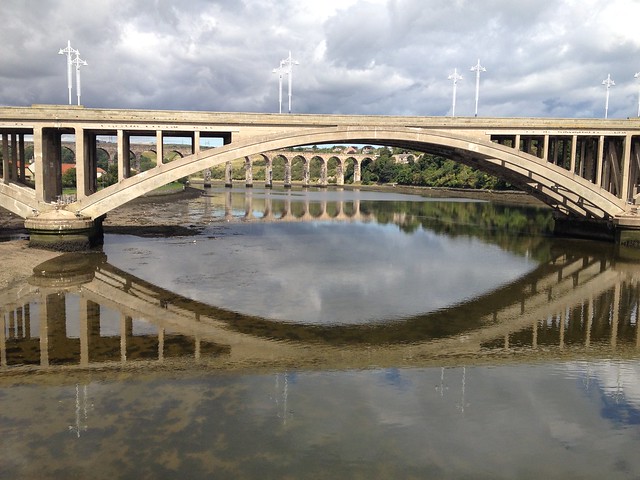 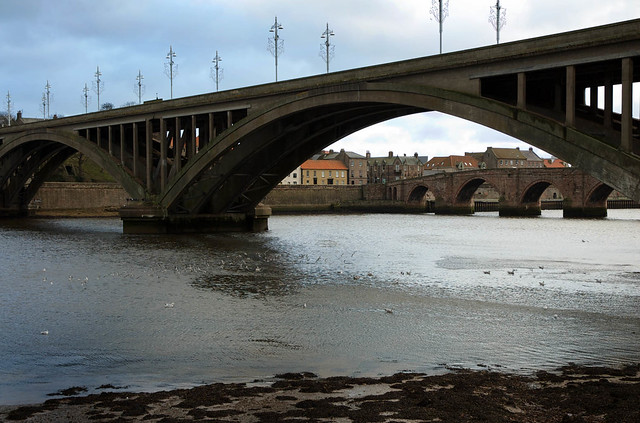 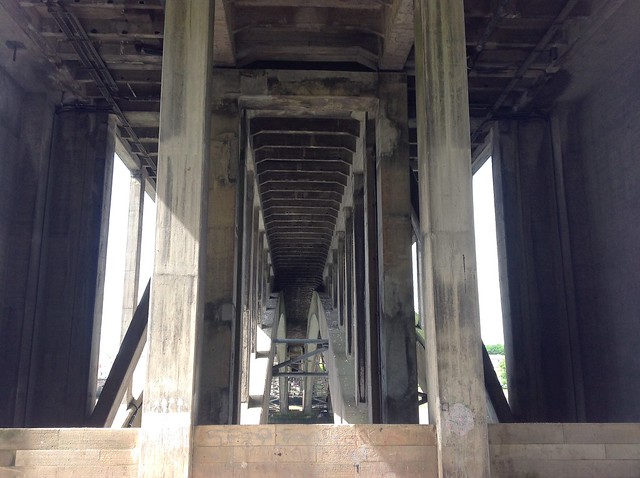 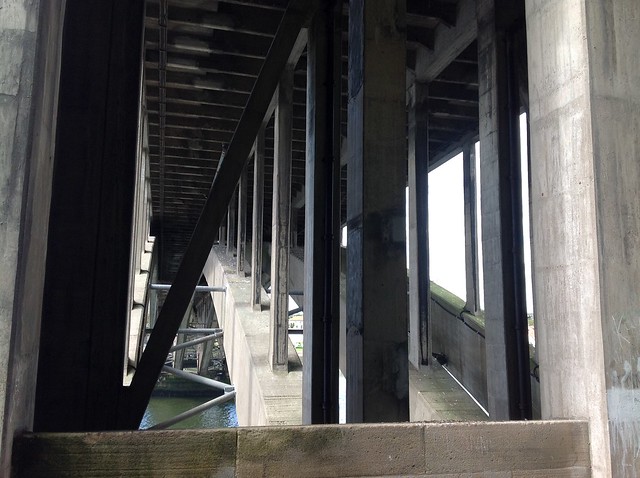 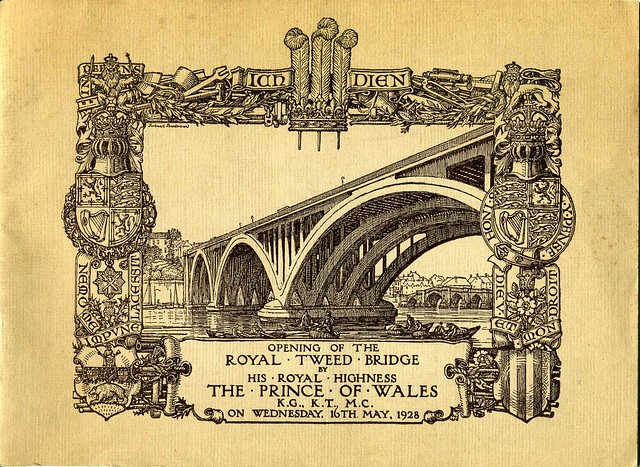 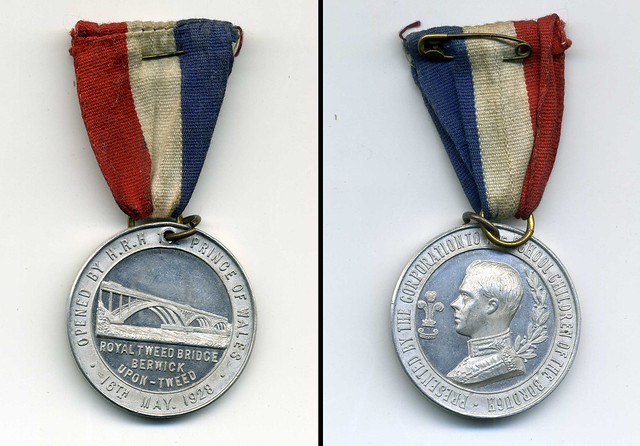 ROYAL TWEED BRIDGE - List entry
- "Royal Tweed Bridge is 430m long and almost 14m wide and has four arches, three of which are over the river and two approach viaducts.The span of the arches ... 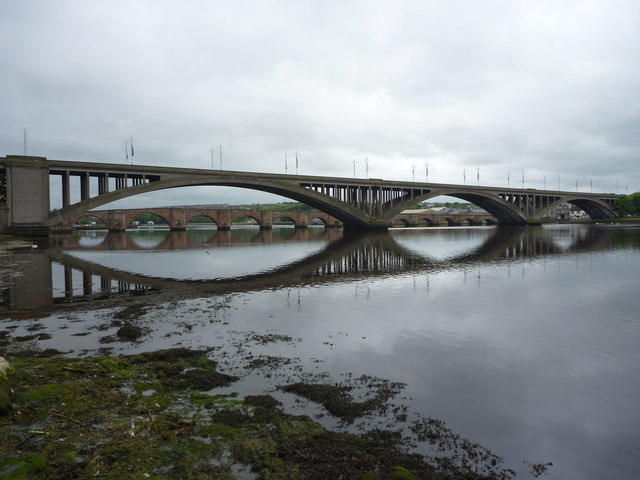 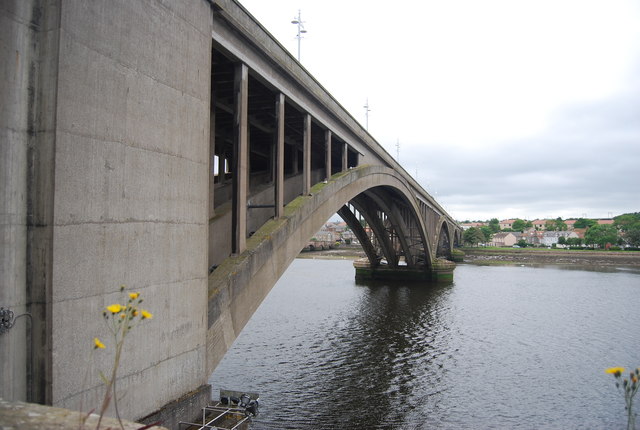 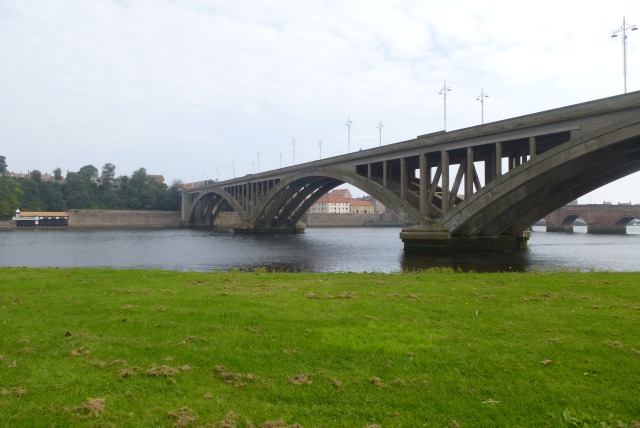 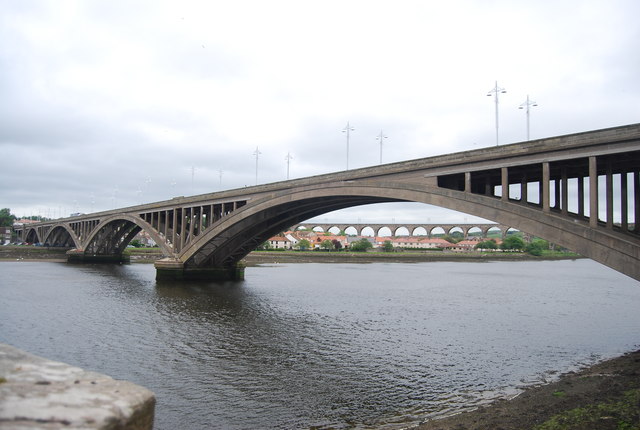 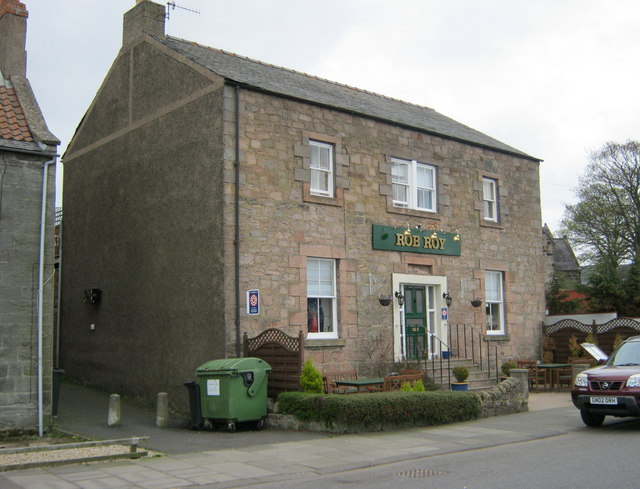 Tweedmouth
- Overview About Tweedmouth History Map Street View Tweedmouth is part of the town of Berwick-upon-Tweed, located on the south bank of the River Tweed, near the mouth of the river. ...

ROYAL TWEED BRIDGE - List entry
- "Royal Tweed Bridge is 430m long and almost 14m wide and has four arches, three of which are over the river and two approach viaducts.The span of the arches ...

Tweedmouth
- Overview About Tweedmouth History Map Street View Tweedmouth is part of the town of Berwick-upon-Tweed, located on the south bank of the River Tweed, near the mouth of the river. ...