NEWBIGGIN, a chapelry, in the parish of Woodhorn, union of Morpeth, E. division of Morpeth ward, N. division of Northumberland, 8½ miles (E. by N.) from Morpeth; containing 760 inhabitants. This place, which is bounded on the east by the sea, formerly belonged to the Balliols, from whom it passed successively to the Valentia, Dreux, Denton, and Widdrington families. The ancient town was of some importance, and in the 43rd of Henry III. obtained a charter for a weekly market on Monday, and an annual fair. Mention occurs of its pier and shipping in various old documents; and in 1337, as a borough of no inconsiderable note, it sent bailiffs to a council on matters of state, convened by the Bishop of Lincoln, the Earl of Warwick, and other noblemen. The township comprises 503 acres. The village is situated on the shore, which, being a fine smooth beach about a mile in length, is well adapted for bathing, for which purpose the place is much frequented during the season; there are several well-built houses for the reception of visiters, and also an inn, in which is a complete establishment of warm, cold, and shower baths. The bay affords good anchorage for small vessels, but is very little used, except for the numerous boats belonging to the fishery of Newbiggin, in which most of the inhabitants are employed. The fish caught are, herring, cod, ling, haddock, salmon, trout, turbot, halibut, soles, lobsters, and crabs, of which great numbers are taken, not only for the supply of the neighbouring markets, but also for those of Newcastle, Carlisle, Manchester, &c.; and houses for the curing of herrings have lately been erected. The chapel is an ancient structure, with a tower surmounted by a spire which was built and formerly used as a beacon. In 1805, two boats, with nineteen men, were lost in a storm off this place, upon which occasion £1,700 were subscribed by the inhabitants of Newcastle and its vicinity for the relief of the bereaved families. 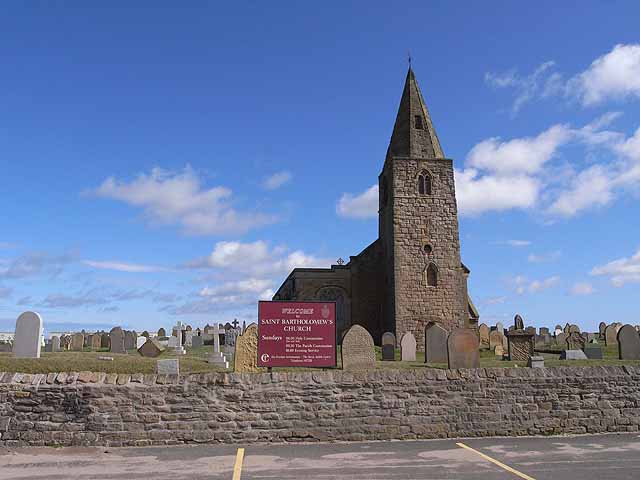 Church of St. Bartholomew
- Overview About the Church Map Street View The Parish Church at Newbiggin-by-the-Sea dates from the 13th century, thought to be on the site of an earlier Saxon chapelry established by ...

Church of St. Bartholomew
- Overview About the Church Map Street View The Parish Church at Newbiggin-by-the-Sea dates from the 13th century, thought to be on the site of an earlier Saxon chapelry established by ...