Mealsgate is a village in the Allerdale district of Cumbria, located about 5 miles south-west of Wigton and 9 miles north-west of Cockermouth. Mealsgate is mainly in Boltons Civil Parish, but parts of Measgate north of Dow Beck (stream) are in Allhallows Civil Parish.

Mealsgate is a village in Cumbria, England, historically within Cumberland.

Mealsgate was a stop on the Bolton Loop of the Maryport and Carlisle Railway and served the pit at Fletchertown like other stops on the loop.

The village is in the parliamentary constituency of Workington.

For Local Government purposes it is in the Boltons Ward of Allerdale Borough Council. The village straddles the Aspatria Ward and Thursby Ward of Cumbria County Council.

Mealsgate does not have its own parish council, instead it is part of Allhallows Parish Council. The Parish of Allhallows incorporates the three villages of Baggrow, Fletchertown and Watch Hill, together with the area of Mealsgate known as Pine Grove.

Around to the south-west is Whitehall, a medieval tower house, restored by Anthony Salvin in the 19th century. 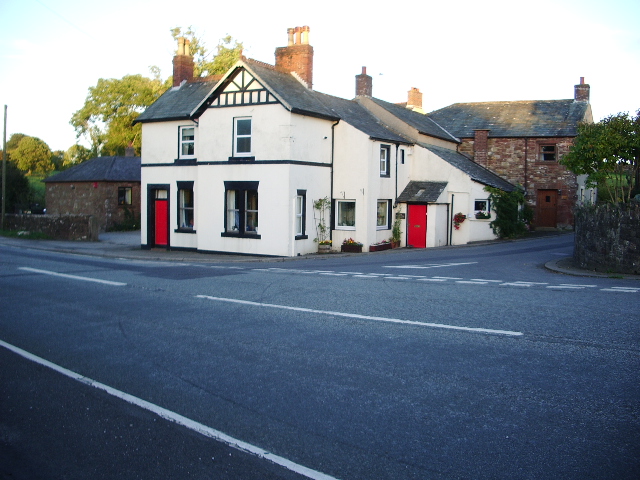 Old Milestone by the A595, east of Mealsgate Bridge

The old A595 near Mealgate

Old Milestone by the A595, east of Mealsgate Bridge

The old A595 near Mealgate