WOOLER (St. Mary), a market-town and parish, in the union, and E. division of the ward, of Glendale, N. division of Northumberland, 16½ miles (S.) from Berwick-upon-Tweed, 18 (N. W.) from Alnwick, 45 (N.N.W.) from Newcastle-upon-Tyne, and 318 (N.N.W.) from London; containing, with the township of Fenton, 1874 inhabitants. This place occupies the eastern declivity of the Cheviot hills; and near it is the village of Humbleton, celebrated for the victory gained by Percy, Earl of Northumberland, in the reign of Henry IV., over a Scottish army of 10,000 men, under the command of Earl Douglas: the engagement occurred on a plain within a mile north-west of the town, where a stone pillar has been erected, commemorative of the event. A great part of the town was destroyed by fire in 1722, since which period it has not made any considerable advances towards improvement. It consists of several streets diverging from a market-place in the centre, is indifferently paved, and supplied with water from a fountain erected at the public expense; a good troutstream flows through the lower part of it, and falls into the river Till. The houses are mostly old, and the general appearance of the place is unfavourable; but the situation, though mountainous, is extremely salubrious, and the town was formerly much resorted to by invalids, for whose use many goats were kept. Here is a branch of the North of England bank; a public subscription library is supported, and a mechanics' institute was established in 1827. The market is on Thursday. Fairs are held on May 4th and October 17th, for horses, cattle, and sheep; and on the third Tuesday in May a general fair takes place on Weetwood Bank, a mile and a half distant from the town. The powers of the county debt-court of Wooler, established in 1847, extend over the registration-district of Glendale. The lord of the manor holds a court leet and baron within three weeks after Easter.

The living is a vicarage, endowed with a portion of the rectorial tithes, valued in the king's books at £5. 8. 1½., and in the patronage of the Bishop of Durham; impropriator of the remainder of the rectorial tithes, the Earl of Tankerville. The vicarial tithes have been commuted for £404. 16., and the impropriate for £54; there are 56 acres of glebe. The church, built in 1765, on the site of an ancient structure destroyed by fire, is a neat edifice, occupying an eminence commanding an extensive and richly-varied prospect. There are places of worship for Burghers and Presbyterians; also a Scottish Relief church, and a Roman Catholic chapel. The Glendale union, of which Wooler is the head, comprises 45 parishes and places, and contains a population of 14,000 persons. On a circular mount near the town are the remains of a tower, apparently of Norman origin. There are also many intrenchments in the vicinity, of which the most remarkable is Humbleton Hugh, circular in form, with a large cairn on the summit; the sides of the hill are formed into terraces, about twenty feet broad, in three successive tiers, which, when they were filled with soldiers, presented a formidable resistance to any assailing force. 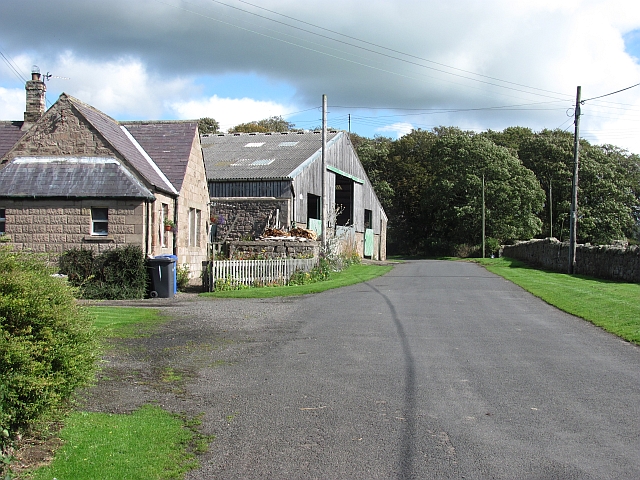 Fenton
- FENTON, a township, in the parish of Wooler, union of Glendale, E. division of Glendale ward, county of Northumberland, 4&frac34; miles (N. by W.) from Wooler; containing 205 inhabitants. This ...

Fenton
- FENTON, a township, in the parish of Wooler, union of Glendale, E. division of Glendale ward, county of Northumberland, 4&frac34; miles (N. by W.) from Wooler; containing 205 inhabitants. This ...