HEATON, a township, in the parish of All Saints, Newcastle-upon-Tyne, union of Newcastle, E. division of Castle ward, S. division of Northumberland, 2 miles (N.E.) from Newcastle; containing 450 inhabitants. This township, which is within the limits of the borough, is separated from the township of Jesmond by the Ouse burn, and comprises about 924 acres of good arable, meadow, and pasture, interspersed with tracts of sand and peat-moss. The manor, in 1628, belonged to the family of Babington, of Harnham. Heaton Hall, built in 1713, and greatly improved by Sir Matthew White Ridley, is a handsome mansion. Here is a station on the Newcastle and North Shields railway, which passes through the township by a tunnel and an excavation. The tithes have been commuted for £166. 14. 4., of which £33. 9. 1. are payable to the vicar of Newcastle. The township contains the ruins of a chapel, in which Edward I., in 1299, attended the celebration of the vespers of St. Nicholas by a juvenile bishop, to whom, and to the singing boys who assisted on the occasion, he presented the sum of forty shillings. 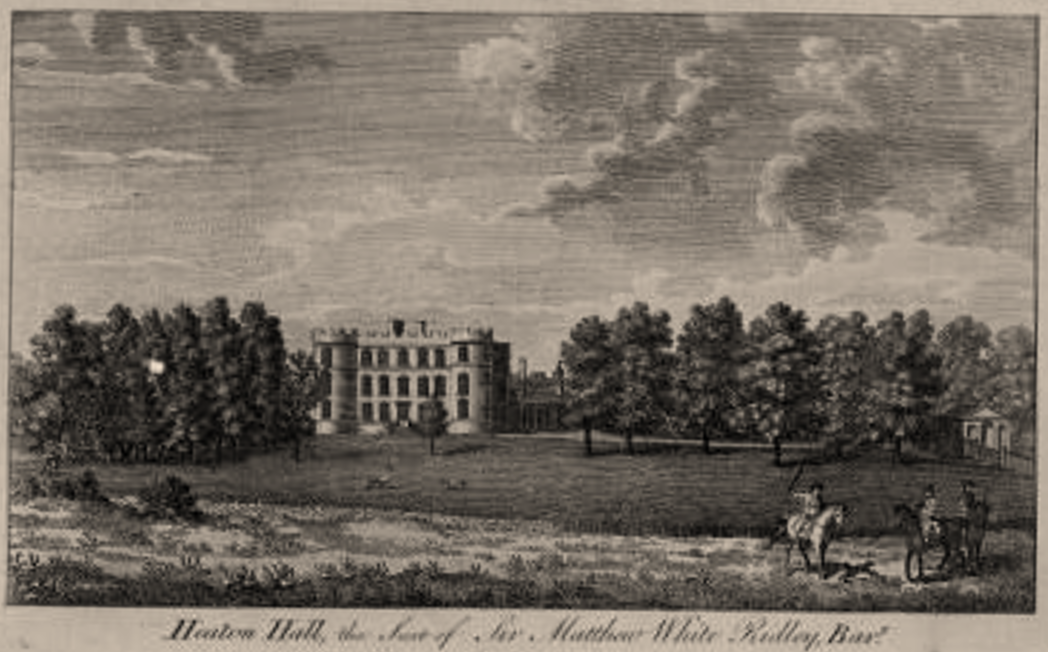 Heaton Hall (demolished)
- The manor of Heaton belonged to the Babington family in the 17th Century.[1] The Ridley family brought the Heaton Estate and&nbsp;Heaton Hall was built in c.1713 by Richard Ridley.&nbsp;His grandson, ...

Heaton Hall (demolished)
- The manor of Heaton belonged to the Babington family in the 17th Century.[1] The Ridley family brought the Heaton Estate and&nbsp;Heaton Hall was built in c.1713 by Richard Ridley.&nbsp;His grandson, ...