It is a popular location for hikers, climbers, fell-runners and other outdoor enthusiasts who are attracted by the many fells ringing the head of the valley. Among the best-known features of Great Langdale are the Langdale Pikes, a group of peaks on the northern side of the dale. England's highest mountain, Scafell Pike, can be climbed by a route from Langdale. Langdale has views of, in particular, Dungeon Ghyll Force waterfall, Harrison Stickle and Pike of Stickle.

Great Langdale was an important site during the Neolithic period for producing stone axes, and was also one of the centres of the Lakeland slate industry.

Great Langdale is known to archaeologists as the source of a particular type of Neolithic polished stone axe head, created on the slopes of the Pike of Stickle and traded all over prehistoric Great Britain and Europe. It also supplied stone for some Bronze Age items, including stone wrist-guards. Neolithic cup and ring marks are found on the Langdale Boulders at Copt Howe.

The mouth of the valley is located at Skelwith Bridge, which lies about two miles west of the town of Ambleside. The Langdale valley contains two villages, Chapel Stile and Elterwater, and a hamlet at High Close. Great Langdale is a U-shaped valley formed by glaciers, while Little Langdale is a hanging valley.

Great Langdale and Elterwater were centres of the Lakeland slate industry. Two slate workings, Elterwater Quarry and Spout Cragg Quarry, have been more or less continually working using modern methods. Elterwater is the larger of the two, and like Spout Cragg, is operated by the Burlington Stone company. There are various other local quarries now fallen into disuse, such as Lingmoor, Banks, Thrang Crag and Colt Howe.

Great Langdale had a productive stone axe industry during the Neolithic period. The area has outcrops of fine-grained greenstone suitable for making polished axes which have been found distributed across the British Isles. The rock is an epidotised greenstone quarried or perhaps just collected from the scree slopes in the Langdale Valley on Harrison Stickle and Pike of Stickle.

Among the best-known features of Great Langdale are the Langdale Pikes, a group of peaks on the northern side of the dale. From below, they appear as a sharp rocky ridge, though they are precipitous only on their southern side; to the north, the land sweeps gently to High Raise, the parent peak of the range. The Pikes themselves include (from west to east) Pike of Stickle, Loft Crag, Harrison Stickle and Pavey Ark.

Despite the peaked profile the summit is wide enough for a sizeable cairn surrounded by a small level area. Loft Crag and Gimmer Crag steal the attention in the foreground while Bowfell impresses across Langdale. A wide swathe of the Southern Fells is in view, whilst even distant Skiddaw puts in an appearance.

Loft Crag has an altitude of 2,238 feet (682 metres). It lies between Harrison Stickle and Pike o’ Stickle and is usually climbed in conjunction with these two peaks. The fell has a small sharp summit, below which rises Gimmer Crag, which is one of the top rock climbing venues in the Lake District. The crag is made of Rhyolite rock and was pioneered in the early 1880s by the father of British rock climbing Walter Parry Haskett Smith.

Harrison Stickle is the high point of the Langdale Pikes and its crags fall south and east from the summit, presenting an arresting view from the valley floor 2,000 ft below, or from further afield. To the north, the main ridge of the central fells passes over Thunacar Knott before climbing to High Raise. The craggy eastern face of this ridge continues north as far as Harrison's near neighbour, Pavey Ark, visually the most impressive face in the area. The south-western border of Harrison Stickle is formed by the deep ravine of Dungeon Ghyll, which cuts through the parapet of the Langdale Pikes and into the lower hinterland of Harrison Combe. Across the Ghyll westwards are Thorn Crag, Loft Crag and finally Pike of Stickle. Below the steep eastern face of Harrison Stickle lie Stickle Tarn and its Ghyll, thus ensuring that all drainage from the fell is to Great Langdale. The tarn is a water filled corrie about 50 ft deep, this being enhanced by a dam. The water is used for public consumption in Great Langdale.

Pavey Ark is 700 m (2,297 ft) high. The main face is a little over a quarter of a mile across and drops about 400 ft. To the south-west it merges into the crags of Harrison Stickle, while the northern end peters out into the valley of Bright Beck. Stickle Tarn is wholly within the territory of the Ark, a corrie tarn which has been dammed to create additional capacity. The stone-faced barrage is low enough not to spoil the character of the pool, and the water is used for public consumption in the hotels and homes below. The tarn has a depth of around 50 ft.

Great Langdale's highest fell is Bow Fell. Other notable Langdale fells are Crinkle Crags, at the head of the Oxendale valley, and Pike o' Blisco on the southern side of the valley.

Dungeon Ghyll is a ravine on the north side of the valley, starting on the fell slopes between Harrison Stickle and Loft Crag/Pike o' Stickle. It is narrow, and a No Through Route for walkers. Much more open is Stickle Ghyll, which descends from Stickle Tarn. There is a well–trodden path from the Stickle Ghyll car park opposite the New Dungeon Ghyll hotel up to the tarn, parts of which have been improved with stone slabs to reduce erosion. Another waterfall, known as Dungeon Ghyll Force, is up a path behind the Old Dungeon Ghyll hotel.

Middle Fell Bridge here is the bridge centring in the plot of the landmark film 1945 Brief Encounter.

Letitia Elizabeth Landon's poetical illustration, Langdale Pikes (1832), ignores the mountains and eulogises on the excellent trout fishing in the river.

There are a number of popular fell walking routes include Bowfell, Crinkle Crags, the Langdale Pikes and England's highest mountain, Scafell Pike. There are also rock-climbing spots on the valley floor, such as Raven Crag, Gimmer Crag and White Ghyll, providing some of the most spectacular rock routes in the UK.

The Langdale Leisure Limited company, consisting of a hotel, timeshare lodges and leisure facilities, operates in the valley.

The Old Dungeon Ghyll Hotel was originally a farm and inn. It was bought by the historian Professor G.M. Trevelyan who donated it to the National Trust. The hotel and the Hikers Bar have a long association with climbing and many famous climbers have stayed at the hotel or drunk in the bar. In climbing circles it is known as the "ODG". Further down the valley there is the New Dungeon Ghyll hotel, built in 1862. Campsites in the area include the National Trust site near Dungeon Ghyll and the Baysbrown Farm campsite at Chapel Stile.

Text from Wikipedia, available under the Creative Commons Attribution-ShareAlike License (accessed: 05/07/2021).
Visit the page: Great Langdale for references and further details. You can contribute to this article on Wikipedia.
Cumbria Great and Little Langdale, 1848 Great Langdale Beck Lakes Civil Parish 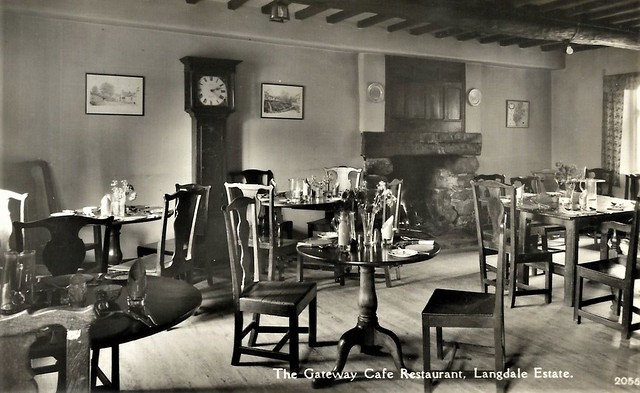 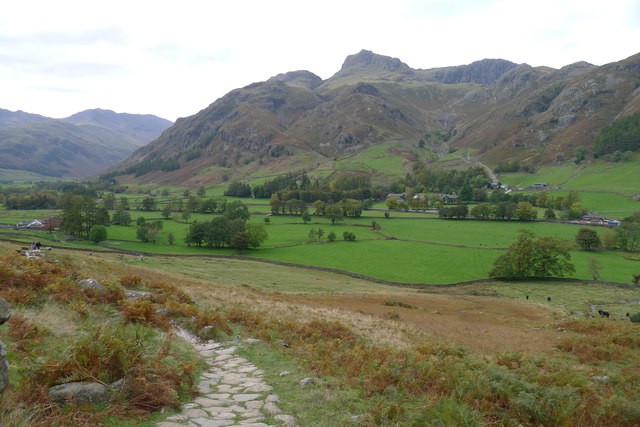 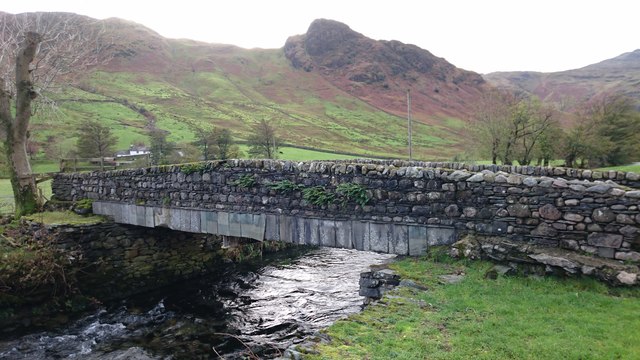 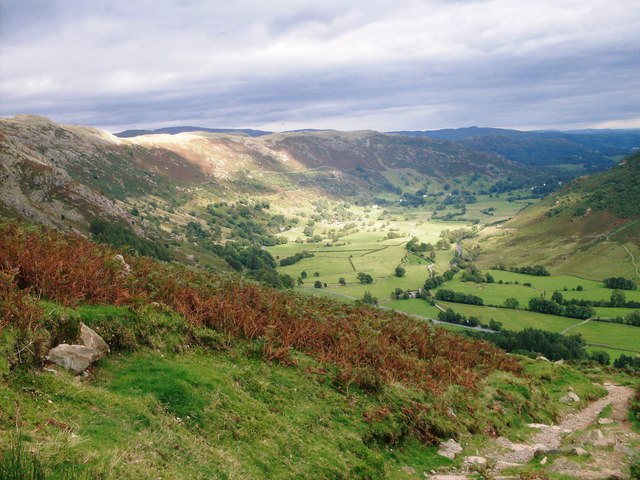 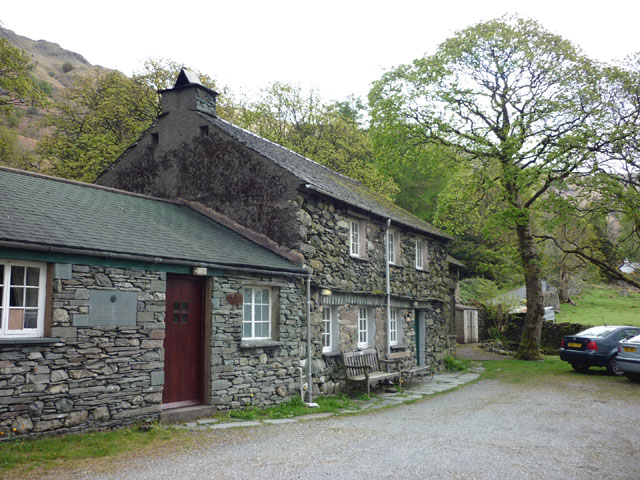 The Robertson Lamb hut of the Wayfarers' Club, Langdale 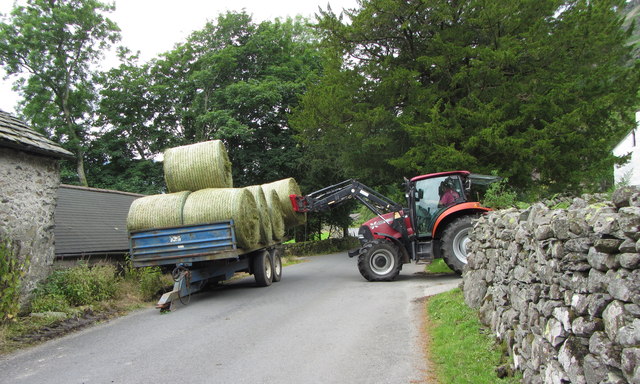 Great and Little Langdale, 1848
- LANGDALE, GREAT and LITTLE, a chapelry, in the parish of Grasmere, union and ward of Kendal, county of Westmorland, 5 miles (W.) from Ambleside; containing 442 inhabitants. This is one ... 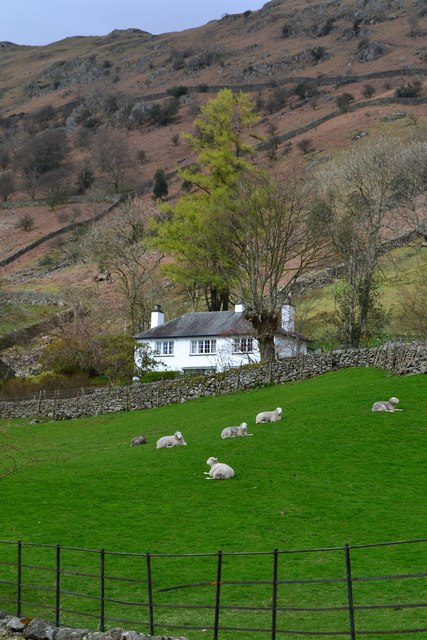 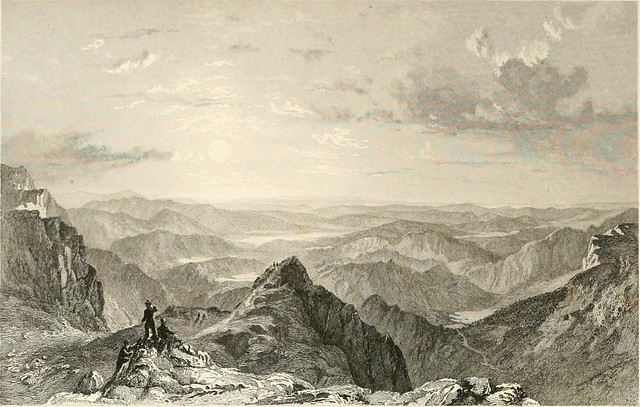 The Robertson Lamb hut of the Wayfarers' Club, Langdale

Great and Little Langdale, 1848
- LANGDALE, GREAT and LITTLE, a chapelry, in the parish of Grasmere, union and ward of Kendal, county of Westmorland, 5 miles (W.) from Ambleside; containing 442 inhabitants. This is one ...