Dawdon is located by the coast at the south of Seaham. Dawdon had been a separate small village of 83 houses, before it was extended by the sixth Marquis of Londonderry, with the building of 20 streets of new housing. This was to accommodate the rapidly growing workforce at his Dawdon Colliery, which opened at Nose's Point in 1907.

DAWDON, or Dawden, a township, in the parish of Dalton-le-Dale, union of Easington, N. division of Easington ward and of the county of Durham, 6½ miles (S.S.E.) from Sunderland; containing 2,017 inhabitants. There was once a castle or peel here, which in the first ages after the Conquest was the seat of the family of Escolland, who, it seems, afterwards assumed the name of Dalden, by which term this place was formerly designated, It was also for two centuries a favourite seat of the family of Bowes. A domestic chapel was attached to the structure, as Sir Jordan de Dalden, in 1325, obtained a licence to establish an oratory within his manor-house, on condition that no injury should arise to the parochial church of Dalton. The township comprises about 830 acres of land. A new harbour has been constructed here, which has attracted a great population: the number of inhabitants in 1821 was only 35.—See Seaham-Harbour.

Dawdon is a former pit community to the south of Seaham, County Durham, in England. An area of the beach near Dawdon (known locally as "the Blast", a former waste coal dumping site) was used in the opening scenes of the film Alien 3.

The township of Dawdon (commonly spelled Dawden on old records and maps) consisted of an area of 1,088 acres between the Durham coast and the townships of Seaham, Dalton-le-Dale and Cold Hesledon. Seaham Harbour was built in the township. The port and town grew during the 19th century, and in 1894 the township was given urban district status, under the name Seaham Harbour. In 1937 the parishes of Dawdon and Seaham were merged into the new Seaham urban district.

The table below gives the average temperature and rainfall figures taken between 1971 and 2000 at the Met Office weather station in Durham:

This is a chart of trend of regional gross value added of County Durham at current basic prices published (pp. 240–253) by Office for National Statistics with figures in millions of British Pounds Sterling.

The church of St Hild and St Helen's - known as the Pitman's Cathedral - was built by donations from local pitmen and consecrated on 10 February 1912.

A Grand Bazaar, charity events and a £2,000 donation from the Marquess of Londonderry helped pay for the building and hundreds of pitmen mingled with ministers and civic dignitaries for the grand unveiling.

"The milestone date began with Holy Communion, held for the last time in the former Cottages School," the late Tom McNee recorded in a history of the church.

"After lunch at Seaham Hall, the Marquess of Londonderry and his distinguished party of 100 joined more than 500 parishioners for the ceremony."

In the 1860s, the part of Seaham Harbour which would become Dawdon consisted of three isolated communities. The first had grown around the bottleworks, the second was next to a chemical works, and the third was at Swinebank – housing Londonderry's engine and wagon works staff.

His decision to sink a new colliery at Dawdon in 1899 was to change the face of the area forever. As work on the pit progressed, so the three little hamlets were swallowed up by rows of houses, shops and pubs.

Plans for a new church followed, with the Marchioness of Londonderry laying the foundation stone in September 1910. Walter Bolland, the senior curate, took church services in the nearby Cottages Schoolroom while the work progressed.

Just two years later, the new £6,500 St Hild and St Helen's was finished, seating up to 700 worshippers in comfort. "Uniquely, it was built from north to south, rather than east to west, because of an unusual fault in the rock formation under the church," Mr McNee recorded.

The interior "was beautified by numerous and costly gifts", many from Marchioness Theresa, including a fine organ. But the high altar was a particular highlight, decorated with the face of St Hild and carved as a likeness to Theresa.

Church organisations soon flourished, including a successful choir, which opera singer Thomas Allen once belonged to. Decades later, however, the vicarage and church came under attack from Hitler's Luftwaffe during World War II .

As explosives dropped in nearby streets, the vicar, James Duncan, sought refuge under the stairs of the vicarage.

Just minutes later, two bombs exploded next to the house, bringing down ceilings and ripping doors from hinges.

A large hole was also blown in the west wall of the Grade II-listed church and almost all the stained-glass windows were shattered. Confident the community would be able to raise the £1,000 needed for repairs, the Rev Duncan authorised work to begin.

His faith in the people of Dawdon was soon rewarded as, just nine months later, the target was reached. However, the church again faced an uncertain future, eventually closing due to dwindling congregation numbers.

While St Hild and St Helen Church was in the process of closing down the local A.O.G. Pentecostal church in the town, The Lighthouse Christian Centre came forward with an offer to buy the building. The Church of England agreed to sell for a nominal sum on condition that it would continue to be used as a Christian church.

The keys were handed over to the newly named "St Hild and St Helen Christian Fellowship” in October 2008. A Thanksgiving Service was held in the same month where the congregation was joined by the "Churches Together" group of Seaham Christian churches.

It was decided to refurbish and update the building so that it would be better suited to serve the community. Rooms were created to enable a wide range of services to fulfil the aim of becoming a church in the community for the community.

Work commenced in January 2009 and lasted 5 months. The church Centenary was celebrated in November 2012, consisting of an "Open Day" featuring a "Victorian Christmas Fayre", "Wedding Fashion Show" and a "Songs of Praise" service.

Since then the church has continued and extended its programme of services to the community, reaching out to all ages in Dawdon and beyond.

The "Pitman's Cathedral" lives on, and in fact the pastor since it changed hands, Mr David Taylor, is an ex-pitman himself.

St Hild and St Helen Christian Fellowship is a Charity registered in England No. 1052543.

The decision to create a new pit at Dawdon was taken by the Marquess of Londonderry in the late 19th century, due to problems at his collieries in nearby Seaham. As Seaham Colliery's workings pushed out to the south-east, it became increasing expensive to mine the reserves from the old pit's shafts.

It was therefore decided to sink new shafts in the rocky coastal area of Noses Point, close to the ancient settlement of Dawdon. Sinking work began in March 1900, but soon ran into problems. Water-bearing rocks proved difficult to excavate, which meant freezing techniques had to be used.

The colliery finally opened for production in October 1907. Dawdon reached the peak of its employment in 1925, when 3862 men and boys helped to produce over one million tonnes of coal annually.

The men of Dawdon Colliery were forced into several industrial disputes with those who wanted to maintain their profits, but escaped the major tragedies suffered by pits at Seaham and Easington Colliery. Many of Dawdon's men did die within its depths, but usually from individual accidents.

Dawdon was a major coal producer for the Londonderry family throughout their ownership, and was later a jewel in the crown for the National Coal Board too. Under nationalisation, the government claimed that the mines belonged to the miners. This proved to be a nonsense as later industrial disputes proved. However, as the mining industry went into decline in the 1980s, Dawdon suffered too. The colliery was eventually closed in July 1991.

Home to a rich industrial past relating closely with its near neighbour Seaham, Dawdon was home to the Seaham Harbour Blast Furnace, in Dawdon Field Dene. The original Seaham Bottle Works was situated here in 1855. The blast furnaces closed in 1865 but were soon replaced by the Chemical Works.

In 1920 the new colliery, Dawdon, employed 3,300 workers and produced over 1 million tons of coal per year outstripping its local competitors. The ironworks and colliery sites have recently been reclaimed and a modern industrial estate launching Dawdon into the 21st century.

1912 Church of St Hild and St Helen, known as "The Pitmen’s Cathedral" erected by the Londonderry family.

30 June – strike called off plunging Durham into a trade depression that left 20% of miners and over 100 collieries idle.

November – Durham Miners returned to work having held out for 7 months.

1985 3 March – National Strike over without agreement. Dawdon Miners returned to work behind their banner and promptly marched back out as a gesture of defiance. Only 133 men had returned to work early.

One million tons of coal abandoned for safety reasons in the "G" seam.

Text from Wikipedia, available under the Creative Commons Attribution-ShareAlike License (accessed: 03/08/2017).
Visit the page: Dawdon for references and further details. You can contribute to this article on Wikipedia. 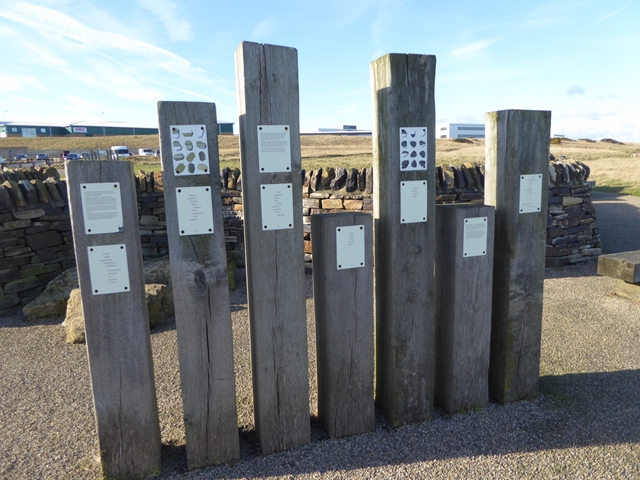 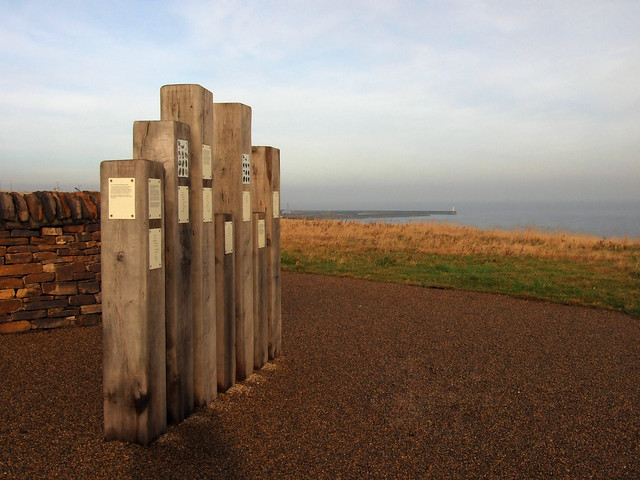