Church of St James the Greater


St James' Church is located on High Street, with a commanding view down Queen's Street in Whitehaven. It was built from 1752 to 1753, originally as a chapel of ease to St Bega's Church in St Bees, until St James' became in independent parish on the 4th June 1867. St James' Church is Grade I listed on the National Heritage List for England.

St James' Church is in High Street, Whitehaven, Cumbria, England, at the crossing with the top of Queen Street. It stands in an elevated position overlooking the town. The church is an active Anglican parish church in the deanery of Calder, the archdeaconry of West Cumberland, and the diocese of Carlisle. The church is recorded in the National Heritage List for England as a designated Grade I listed building.

The church was built in 1752–53 at a cost of £3,400 (equivalent to £{{formatnum:}} in ). Its design has been attributed to Carlisle Spedding, who was agent and mining engineer to Sir James Lowther. However the authors of Buildings of England series note that no other building designed by Spedding is known, and it has been suggested that the architect was Christopher Myers, who later designed churches in Ireland. The land for the church was given by Sir James. In 1871 the apse was restored, blocking the east Venetian window, and introducing top lighting. The interior of the church was reordered in 1886 by C. J. Ferguson, which including moving the altar and the organ. In 1921 the southeast of the church was converted into a war memorial chapel, and the northeast into a baptistry. The interior of the church was reordered again in 1979–80, which included removal of the tiered seats in the galleries. Glass doors were installed at the entrance to the church in 1997, and in the following year two new bells were added.

St James' is designed in Neoclassical style. The west side of the tower and the centre bay of the west end are in ashlar stone, and the rest of the church is roughcast with rusticated quoins. The roofs are slated. The plan of the church is that of a rectangular body, with an embraced west tower, and an elliptical apse at the east end. The apse is top-lit by a dome. The tower is surmounted by a cornice with a plain parapet, and pinnacles in the form of obelisks. The bell openings are round-headed. Around the church are rectangular windows in two tiers. The Venetian east window is blocked. At the west end is a round-headed doorway flanked by pilasters supporting a triglyph frieze above which is a pediment. Over this is another larger pediment.

Writing in 1967, the architectural historian Nikolaus Pevsner stated that this was "the finest Georgian church interior in the county", and the later authors of the Buildings of England series describe the interior as "serenely beautiful". It is entered from the west door by a sliding glass door leading into a vestibule in the base of the tower. This is etched with the national symbols of Sri Lanka. On each side of the vestibule are stairs rising to the galleries. In the body of the church are galleries on the north, west, and south sides, which are carried on Doric columns. Along the front of the galleries is a triglyph frieze, and rising from the galleries to the ceiling are Ionic columns. The ceiling is flat, and is decorated with plaster roundels containing depictions of the Annunciation and the Ascension, and with angels and cherubs in Rococo style. The apse contains a painting of the Transfiguration by Giulio Cesare Procaccini surrounded by a pedimented aedicule. The painting was given to the church by the 3rd Earl of Lonsdale, and is said to have come from the Escorial. Flanking this are four Ionic pilasters.

The gate piers at the entrance to the churchyard opposite the west end of the church have been listed at Grade II. They consist of two square stone gate piers with cornices. There was formerly a wrought iron lamp holder on the cross bar.

Text from Wikipedia, available under the Creative Commons Attribution-ShareAlike License (accessed: 14/04/2020).
Visit the page: St James' Church, Whitehaven for references and further details. You can contribute to this article on Wikipedia.
Whitehaven Churches and Cathedrals 1753 Historic Buildings and Monuments in Whitehaven Grade I Listed 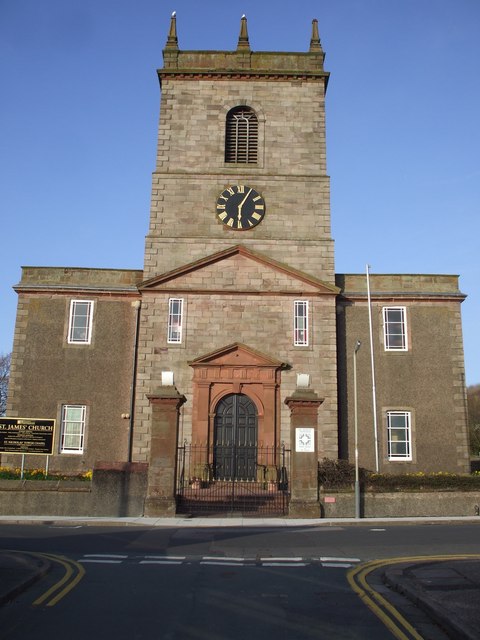 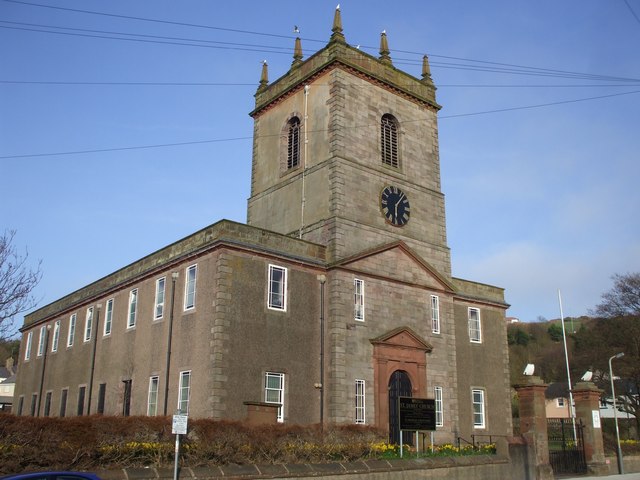 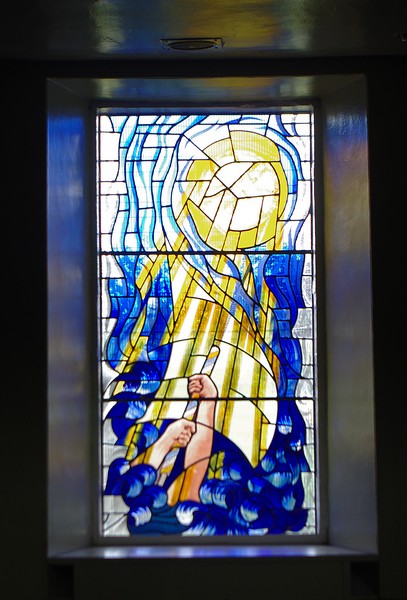 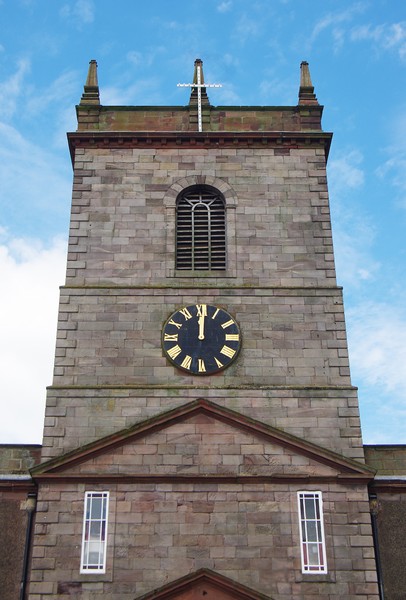 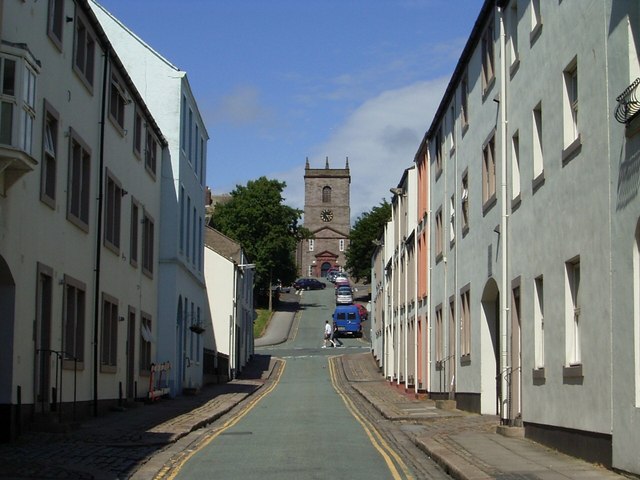 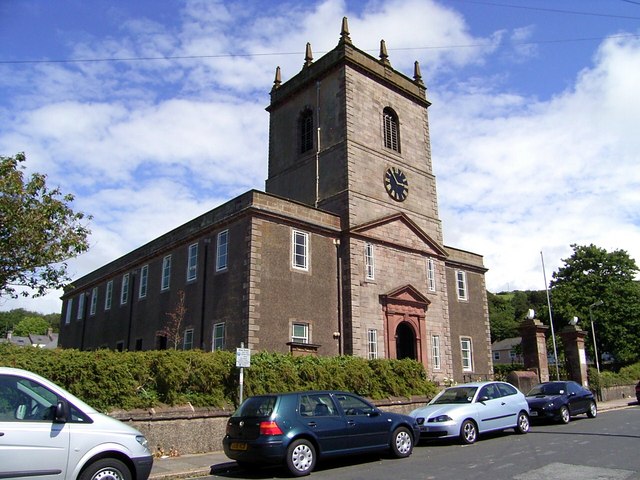 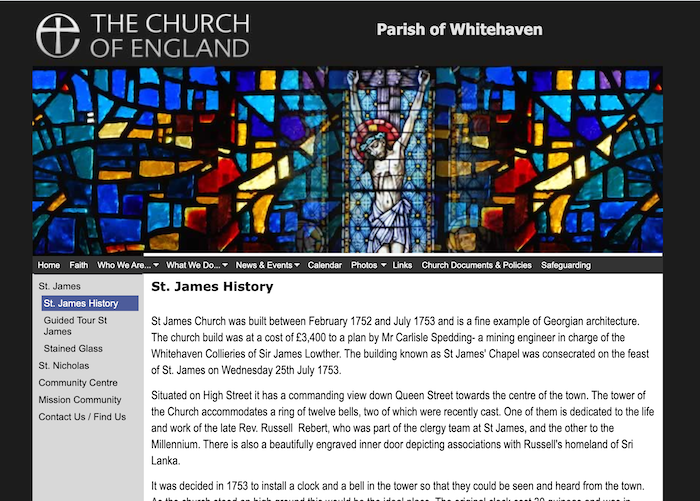 Whitehaven - St James’ Church
- "This lovely church, once described by Sir Nikolaus Pevsner as ‘the finest Georgian church interior in the county’, was dedicated on St James’ day, 25th July 1753. It was built ... 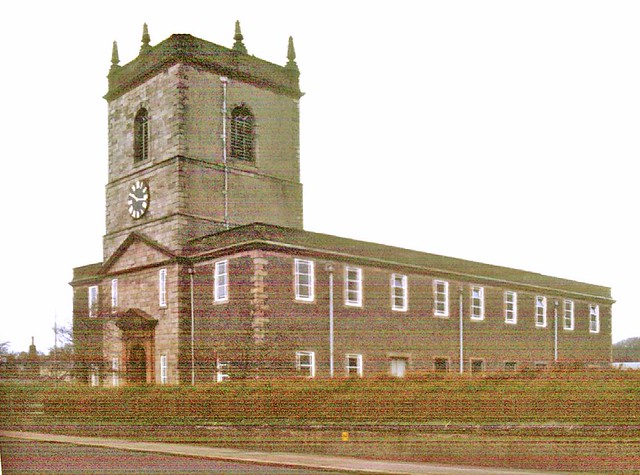 Whitehaven - St James’ Church
- "This lovely church, once described by Sir Nikolaus Pevsner as ‘the finest Georgian church interior in the county’, was dedicated on St James’ day, 25th July 1753. It was built ...

Historic Buildings and Monuments in Whitehaven