This was a battle fought at Carham between the Northumbrians and the Scots. The Nothumbrians led by Huctred, son of Waldef were defeated by Malcolm II (Máel Coluim mac Cináeda) King of the Scots, in alliance with Owain the Bald of Strathclyde (then a separate Kingdom to Scotland). Some historians believe the battle was significant in that it redefinened the border between Scotland and the North of England, as the River Tweed. Historical texts give conflicting dates for the battle of either 1016 or 1018.

The Battle of Carham (c. 1018) (also referred to as the Battle of Coldstream) was fought between the Kingdom of Scotland and the Northumbrians at Carham on Tweed. Uhtred, son of Waldef, earl of the Northumbrians, fought the combined forces of Malcolm II of Scotland (Malcolm son of Cyneth, king of Scots) and Owen the Bald (King of Strathclyde). Their combined forces defeated Earl Uhtred's forces, determining the eastern border of Scotland at the River Tweed.

Written records of the battle

Sources for the battle are scarce. Those that do mention the battle often include it in a survey of other events. The English sources only briefly discuss the battle. Three of the Anglo-Saxon Chronicle manuscripts (C, D, and E) record the events leading to the conflict:

"Then Edmund and Earl Uhtred led an army into Staffordshire and into Shropshire and to Chester, and they ravaged on their side and Cnut on his side. He then went out through Buckinghamshire into Bedfordshire, from there to Huntingdonshire, and so into Northamptionshire, along the fen to Stamford, and then into Lincolnshire; then from there to Nottinghamshire and so into Northumbria towards York."

King Malcolm and Owen grouped together "near Caddonlea (Selkirkshire) […] where the Wedale road from Alba met the Tweeddale road from Strathclyde, lay at the northern edge of Ettick Forest (roughly corresponding with to Selkirkshire in extent) which formed a march between Cumbria and Northumbria." Uhtred’s forces intercepted them before they crossed Cheviot. This interception meant that he did not have enough time to gather enough troops. Another source, De obsessione Dunelmi (“On the Siege of Durham”), places the battle under the 1018 annul listing Uhtred as the Northumbrian army.

Symeon of Durham (12th Century), using dependable Northumbrian materials, in Historia Dunelmensis Ecclesie, places the battle in 1018 (“without mention of Uhtred”). Frank Stenton proposed, and some scholars maintain, that astronomical events referred to in accounts of the battle actually indicate 1016. Symeon’s record of a comet’s visibility during the battle correlates with astronomical evidence from August 1018. Stenton also contended that the death of Earl Uhtred in 1016 voids the argument for 1018. Three versions of the Anglo-Saxon Chronicle (C, D, and E) reference the death of Uhtred in the 1016 annul:

"When Uhtred learned this, he left his ravaging and hastened north-wards, and submitted then out of necessity, and with him all the Northumbrians and he gave hostages; and nevertheless he was killed with him Thurketel, Nafena’s son; and then after that the king (Cnut) appointed Eric for the Northumbrians, as their earl, just as Uhtred had been; and then turned him southward by another route keeping to the west and the whole army then reached the ships before Easter."

Stenton and C. Plummer argue that the earlier date of the battle used the 1016 annual’s inclusion of Uhtred’s death. Durham argues and Woolf supports that the mention is an aside from the scribe recording in 1018 or 1019. De Obsessione Dunelmi (c. 1165) supports Durham’s theory that the Anglo-Saxon Chronicle scribe is discussing the more recent death of Uhtred as it places his death following the events outlined in the English source under the 1018 annul.

The battle’s significance is a matter of controversy, especially in regard to the region of Lothian. Scottish historians claim Lothian was won for Scotland at Carham and that Scotland’s borders were expanded as a result; Marjorie O. Anderson argues that the English king Edgar the Peaceful granted Lothian to Kenneth II of Scotland, King of Scots, in 973. In English sources, the Battle of Carham is not given any special significance. Still others, such as G.W.S. Barrow hold, that "What English annalists recorded as the 'cession' of Lothian was... the recognition by a powerful but extremely remote south-country king of a long-standing fait accompli."

The Scots' possession of what now constitutes the south-east of Scotland seems to have been recognized by kings of England, even when kings such as Cnut and William the Conqueror invaded, as they did not seek permanent control of the area.

After the battle of Carham, much of present-day Scotland was under the control of the King of Scots, although Norsemen still held sway in Ross, Caithness, Sutherland, and The Isles. The Lords of Galloway remained semi-independent. Scotland or Scotia referred to what constitutes present-day Scotland north of the Forth and Clyde; it was not until the time of King David I of Scotland that people in the south-east of the kingdom began to think of themselves as Scots. In his own charters (e.g. to St Cuthbert's in Edinburgh), he continued to refer to the men of Lothian as English. Woolf asserts that “the likelihood is that these are under representative glimpses of a much longer conflict which escaped he detailed gaze of our chroniclers because far more interesting things were happening in Southumbria and Ireland at the time."

The Scotland-based society’s mission statement is “to investigate, raise awareness, and commemorate the Battle of Carham.” The society’s website provides dates for “public meetings, commemorative events, and future plans” as well as excerpts from articles and archaeological findings pertaining to the battle.

Text from Wikipedia, available under the Creative Commons Attribution-ShareAlike License (accessed: 04/04/2018).
Visit the page: Battle of Carham for references and further details. You can contribute to this article on Wikipedia.
Anglo-Saxon (410 to 1066 AD) 11th Century Anglo-Scottish Wars Carham

The Battle of Carham - From Dot to Domesday 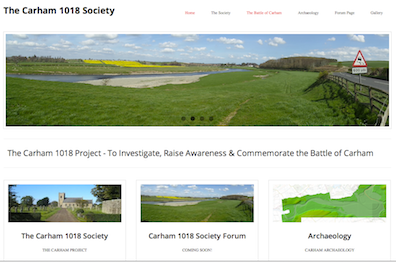 Carham 1018 Society
- A locally-based team working with the Battlefield Trust and local community to investigate and research Battle of Carham, the times, causes and effects thereof and the persons and peoples involved. 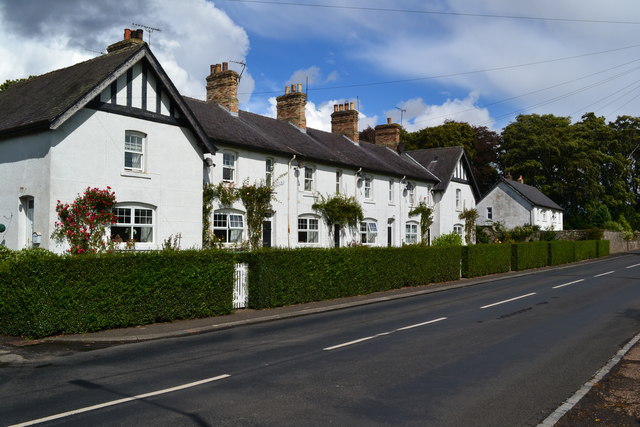 Carham
- Overview About Carham Map Street View &nbsp; Carham or Carham On Tweed is a village in Northumberland, England. The village lies on the south side of the River Tweed about ...

The Battle of Carham - From Dot to Domesday

Carham 1018 Society
- A locally-based team working with the Battlefield Trust and local community to investigate and research Battle of Carham, the times, causes and effects thereof and the persons and peoples involved.

Carham
- Overview About Carham Map Street View &nbsp; Carham or Carham On Tweed is a village in Northumberland, England. The village lies on the south side of the River Tweed about ...