REDCAR, a chapelry, partly in the parish of Upleatham, but chiefly in that of Marsk, union of Guisborough, E. division of the liberty of Langbaurgh, N. riding of York, 7 miles (N.) from Guisborough; containing, in 1841, 794 inhabitants. This place, which is on the sea-shore, has, from the advantages of its situation, risen from an obscure and humble village consisting of a few fishermen's huts, into a handsome wellbuilt town and fashionable bathing-place. It is seated in one of the most charming districts of which the county can boast, and overlooks the magnificent Tees bay, enlivened by the numerous vessels trading to the neighbouring ports. The landward prospect reaches to the range of the Cleveland hills, among which RoseburyTopping stands conspicuous; the easternmost of these hills terminate in beetling cliffs of from 500 to 700 feet in height, the most remarkable of which are Huntcliff, Roacliff, and Staiths Nab, the last forming the southeastern boundary of the bay. The shore of the bay is here composed of broad sands, extending five miles towards the east, and two or three towards the west, and of such firmness that the wheels of a carriage scarcely leave an impression upon them. The drives inward, amidst the lovely scenery of Kirk-Leatham and Wilton, and of the vale of Guisborough to Skelton and Upleatham, are rendered still more agreeable by the excellence of the roads, on which there is no turnpike impost for 18 miles in any direction. The town contains some good inns and lodging-houses, with several establishments of warm and cold baths; and in consequence of the formation of a line of railway to Redcar in 1846, parties desirous of enjoying the sea-breezes here, may at a moderate expense and in a few hours reach the town from the midland and even southern counties.

A considerable fishery is carried on, the fish taken being chiefly cod, ling, haddock, turbot, lobsters, crabs, and shrimps, of which great quantities are sent to various parts of the county; but the want of a convenient harbour renders the pursuit somewhat hazardous, and notwithstanding the fishermen's intimate knowledge of the coast, boats and lives are occasionally lost. Some protection, however, is afforded in landing, by the ridges of aluminous schistus rocks, called the Salt Scar and the East Scar, that extend into the sea opposite Redcar for above a mile, and form between them a capacious basin or natural harbour when the water falls below their level, which it does at half tide. These rocks, instead of being a series of irregular heaps, serve as piers, or breakwaters, and might readily be converted by the hand of man into a means of preventing the shipwrecks which are so frequent on this dangerous coast. Mr. Brooks, the civil engineer, conceived the idea of taking advantage of these natural features, and an application was made to parliament for a private bill, to form a harbour of 510 acres, having 30 feet at low water; but the proposition was rejected, on the principle that a measure so largely relating to the protection of life and property, should be undertaken by the nation. The subject is again attracting the attention of the legislature, from the strong recommendation of the committee on shipwrecks: and it is not unlikely that something will eventually be done, as there is no deep-water harbour, or harbour which can be entered at all states of the tide, in the long distance between the Frith of Forth and the Humber. An excellent life-boat establishment is supported by subscription; and here is a coast-guard station.

The chapelry comprises by computation 520 acres, of which about 150, including between 30 and 40 acres of inferior land called the sea banks, are pasture; the surface is level, and the soil various, being on the sea-side a sandy loam, and inland for the most part clay, producing excellent wheat. The Earl of Zetland is lord of the manor, and chief proprietor of the soil. Redcar House, a handsome mansion overlooking the sea, is the residence of James Ewbank, Esq. The chapel, dedicated to St. Peter, is in the later English style, with a square tower surmounted by four turrets, and contains 700 sittings, of which half are free; it was erected in 1828, at a cost of £2,700, raised by subscription, aided by a grant of £500 from the Incorporated Society, and a donation of £600 from the late Earl of Zetland. The living is a perpetual curacy, in the patronage of the present Earl, with a net income of £56, and a neat parsonage-house, situated near the chapel. There are places of worship for Primitive Methodists and Wesleyans; and a parochial school, with a house for the master, built by the first Lord Dundas, is partly supported by the Earl of Zetland, and partly by subscription. The rocks in the vicinity of Redcar abound with fossil remains; and on the East Scar are found ammonites of 20 inches in diameter. 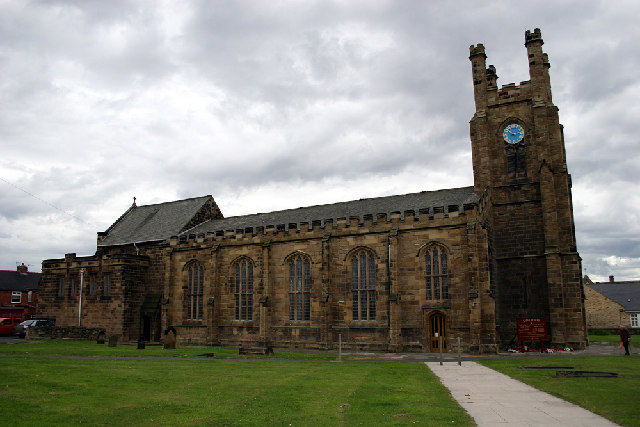 Church of St Peter
- Overview Map Street View St Peter's church in Redcar was originally consecrated by the Archbishop of York in 1829 as a 'Chapel of Ease' of the parish of Marske.&nbsp;In 1835 ...

Church of St Peter
- Overview Map Street View St Peter's church in Redcar was originally consecrated by the Archbishop of York in 1829 as a 'Chapel of Ease' of the parish of Marske.&nbsp;In 1835 ...