Outwood Academy Acklam is located on Hall Drive in Acklam, Middlesbrough. The new building opened in September 2012. Prior to becoming an academy in 2013, the school was known as Oakfields Community College. On becoming an academy it came under the sponsorship of the Outwood Grange Academies Trust.

Outwood Academy Acklam (formerly Oakfields Community College) is a comprehensive secondary school with academy status, located in the Acklam area of Middlesbrough, England. It has a mixed intake of both boy and girls, ages 11–16, and had over 950 pupils on roll in January 2017.

The school is operated by Outwood Grange Academies Trust, and current principal is Mark Hassack.

The school was first established as Oakfields Community College in September 2011, replacing Hall Garth Community Arts College and King's Manor School in Hall Drive, Acklam. The school then relocated to new building opened in September 2012 as part of Middlesbrough's £100 million Building Schools for the Future scheme.

Oakfields Community College received its first Ofsted inspection report in February 2012, and was placed in special measures after receiving an 'inadequate' rating, the lowest possible. In June 2012 a further Ofsted report again rated the school as inadequate. During this time it was sponsored by the Endeavour Education Trust made up of Macmillan Academy, Middlesbrough College and Teesside University.

The school converted to academy status in September 2013 under the new sponsorship of the Outwood Grange Academies Trust, and was renamed Outwood Academy Acklam. The chief executive is Sir Michael Wilkins, who was recognised in 2010 by the National College for School Leadership with a 'systems leadership award' and was knighted for services to education in the Queen's New Year Honours 2014.

In September 2013 the school restructured the tutor groups, altering the way provision of pastoral care was organised. This involved a move away from the traditional horizontal (same age) structure of forms to a more progressive vertical one. The former structure saw each student belonging to a form group of around 30 pupils from their own year-group, with a teacher acting as a tutor. The new structure maintains a teacher acting each year as a tutor to the group, but the group is mixed-age with students from all years included. They are known as 'Vertical Mentor Groups' ("VMGs"). Each group therefore evolves annually, as older students leave and are replaced by new Year 7 student entering the school.

Each VMG is given the name of a country, and the countries are arranged into five continents. The continents are in different parts of the school: Africa, Asia, The Americas, Europe and Oceania.

Vertical structuring has been implemented in other secondary schools, the main advantages being seen as the mixing of ages leading to an increased sense of community, allowing for pupils to share experiences, foster understanding and reduce bullying. The system also complements the school curriculum, where in many cases, students in Years 9 and 10 and 11 are in the same subject mixed-age option groups.

The school uses a system of escalating "Consequences" as a framework for discipline, beginning ranging from C1 to C6 (exclusion).

Students are given warnings in lessons for low level disruption. Upon reaching a C4, the student is removed from the classroom and given an after-school detention. If the student chooses to not attend the detention, then they receive a C5, which means isolation for one school day, in the "Consequences Room". A C6 is given if the student misbehaves in that room, resulting in a fixed term of exclusion from the school. Upon returning, the student then has to do the day in the isolation room.

Text from Wikipedia, available under the Creative Commons Attribution-ShareAlike License (accessed: 08/03/2018).
Visit the page: Outwood Academy Acklam for references and further details. You can contribute to this article on Wikipedia.
Acklam Secondary Schools 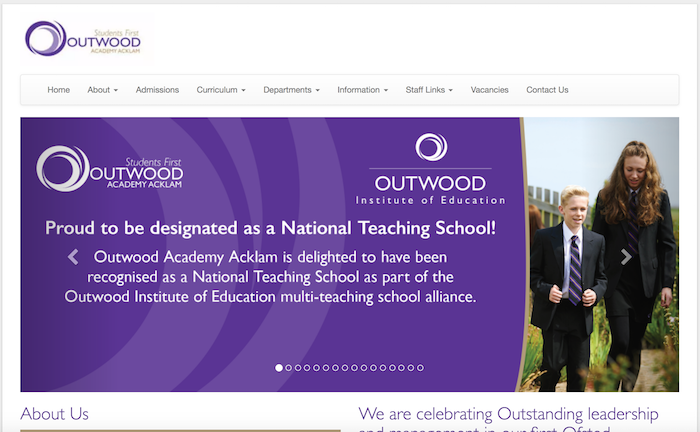