Middlesbrough Football Club was formed in 1876. In 1903, the club moved to Ayresome Park, their home for the next 92 years until they moved to the Riverside Stadium in 1995.

Middlesbrough Football Club is a professional association football club based in Middlesbrough, North Yorkshire, England. Formed in 1876, they have played at the Riverside Stadium since 1995,[6] their second ground since turning professional in 1889. They played at Ayresome Park for 92 years, from 1903 to 1995....

They were one of the founding members of the Premier League in 1992. They won the FA Amateur Cup in 1895 and again in 1898. The club turned professional in 1889, but reverted to amateur status in 1892. They turned professional permanently in 1899. After three seasons, they won promotion to the First Division, where they would remain for the next .

In 1903, the club moved to Ayresome Park, their home for the next . In 1905, the club sanctioned the transfer of Alf Common for £1,000, a record fee. Over the next few years, their form fluctuated greatly, rising to sixth in 1907–08 before dropping to 17th two seasons later. The club rose to their highest league finish to date, third, in 1913–14. World War I soon intervened and football was suspended.

Before league football resumed, Middlesbrough won the Northern Victory League, but the team were unable to maintain their previous form and finished the 1919–20 season in mid-table. They remained in the First Division for the next few seasons, but were relegated in 1923–24 after finishing bottom, ten points adrift of their nearest rivals. Three seasons later, they won the Division Two title. During that season, debutant George Camsell, who had signed from Third Division North side Durham City the previous season, finished with a record 59 league goals, which included nine hat-tricks. He would continue as top scorer for each of the next ten seasons. Their tenure back in the top flight lasted only one season, and the club were relegated. They were promoted at the first attempt in 1928–29, winning another Second Division title. The club remained in the First Division until 1954.

The decade before the war saw the emergence of Wilf Mannion and George Hardwick, both of whom would go on to become England internationals in the years ahead. Middlesbrough climbed to fourth in the last full season before World War II and were expected to challenge for the title next season, but the war intervened. After the war, the club was unable to recover the form of the previous seasons and hovered around mid-table and exited in the early rounds of the FA Cup. Soon afterwards, the team began to falter, eventually suffering relegation in 1953–54. This was the start of a 20-year spell outside the top division, but saw the emergence of one of the club's top goalscorers, Brian Clough, who scored 204 goals in 222 games, before he left for Sunderland. Over that period, Middlesbrough maintained reasonable progress in the Second Division but were never serious contenders for promotion. After a fourth-place finish in 1962–63, the club endured a steady decline and were relegated to the Third Division for the first time in their history in 1966.

New manager Stan Anderson returned the club to the second flight at the first attempt. Middlesbrough would not finish below ninth during the next eight seasons. By 1974, Jack Charlton had taken over as manager and guided the team back to the top flight. They ensured promotion as early as 23 March, and with eight games of the season left, they became runaway champions, finishing with a record 65 points. Middlesbrough won their first silverware as a professional side in the 1975–76 season, lifting the Anglo-Scottish Cup in its inaugural season after a two-legged final win over Fulham.

The club experienced severe financial difficulties during the mid-1980s. Middlesbrough were dropping down the table, and finished 19th in the 1984–85 season. In April 1986, the club had to borrow £30,000 from the Professional Footballers' Association (PFA) to pay wages. The final game of the season saw Middlesbrough relegated to the Third Division again. That summer, the club called in the Provisional Liquidator and shortly afterwards, the club was wound up and the gates to Ayresome Park were padlocked. Without the £350,000 capital required for Football League registration, a new rule, it seemed inevitable that the club would fold permanently. Steve Gibson, however, a member of the board at the time, brought together a consortium, and with ten minutes to spare before the deadline they completed their registration with the Football League for the 1986–87 season. Following the registration came both a change of club crest and a change of the official company name to Middlesbrough Football and Athletic Club (1986) Ltd.

Over the next two seasons, Middlesbrough gained successive promotions into Division Two and then into Division One. The next season, however, they came straight back down to Division Two, and with it came the then British transfer record move of Gary Pallister to Manchester United for £2.3 million. Despite constant promotion and relegation, Middlesbrough were founding members of the FA Premier League for the 1992–93 season.

Player-manager Bryan Robson, from Manchester United, took charge in 1994 and Middlesbrough were brought back into national attention. Following promotion to the Premier League and high-profile purchases like diminutive Brazilian Juninho, many considered Middlesbrough were on the rise. A difficult 1996–97 season, however, was compounded by a deduction of three points imposed just after Christmas as punishment for the club's failure to fulfil a fixture against Blackburn Rovers, which ultimately resulted in relegation. Without the points deduction, the club would have had enough points to avoid the drop. At the same time, the club managed to reach both the League and FA Cup finals for the first time, but lost out in both. Despite being in the second tier, they were again runners up in the League Cup final the next year.

Despite losing high-profile players Fabrizio Ravanelli and Juninho due to relegation, Middlesbrough were promoted back to the Premier League at the first attempt, in 1998. The following season saw them settle well and they enjoyed a 12-game unbeaten run midway through 1998–99, including a 3–2 win at Old Trafford in January during which they took a 3–0 lead; it was Manchester United's only home defeat during their treble-winning season. Middlesbrough continued to stay secure in mid-table the following season, thanks mainly to the goals of Hamilton Ricard and the signings of big name players such as Paul Ince and Christian Ziege. In 2000–01, they had a brief relegation scare that was solved with the arrival of Terry Venables as co-manager, and a 3–0 win away at Arsenal in April was the team's best result. The trend of buying European stars continued with the acquisitions of Christian Karembeu and Alen Bokšić.

Bryan Robson left the club before the start of 2001–02 season, having served as manager for seven years, and was replaced by Manchester United assistant coach Steve McClaren. The following seasons saw Premier League security maintained as Middlesbrough slowly improved and were seen as a tough side to beat when playing at the Riverside Stadium. During McClaren's reign, Middlesbrough achieved their highest Premier League placing, finishing seventh in 2004–05.

The 2003–04 season was the most successful in the club's history as they finally won a major trophy after beating Bolton Wanderers 2–1 in the League Cup final under Steve McClaren. This success also ensured that Middlesbrough would qualify for Europe – the UEFA Cup – for the first time, ultimately reaching the last 16 in the competition. UEFA Cup qualification was achieved for the second consecutive year after a dramatic 1–1 away draw with Manchester City thanks to a late penalty save from Mark Schwarzer in the final game of the season.

Middlesbrough reached the 2006 UEFA Cup final in Eindhoven, following two comebacks from 3–0 down in the rounds preceding it, but lost 4–0 to Sevilla. Following the cup final, McClaren left to manage the England national team, and captain Gareth Southgate took over. Despite not having the coaching qualifications, he was allowed to continue after receiving special dispensation. During the 2007–08 season, Southgate broke Middlesbrough's record transfer fee, paying £13.6 million for Brazilian international striker Afonso Alves. Southgate's first two seasons saw the club finish in 12th and 13th places. He oversaw the club reaching the quarter-finals of the FA Cup for three seasons, but the club was relegated to the Championship on the last day of the 2008–09 season. Southgate was sacked in October 2009 and replaced by Gordon Strachan. At the time of Southgate's dismissal, Boro were fourth in the Championship and only one point away from the automatic promotion spot, but their form under Strachan was significantly worse and they finished mid-table.

Despite starting the 2010–11 campaign as promotion favourites, the club endured a disappointing start to the season securing only one point in five away games. Having slipped to 20th in the Championship following a home defeat to rivals Leeds United, Strachan resigned on 18 October. A week later, Tony Mowbray was confirmed as the new manager. Having staved off the threat of relegation, Mowbray successfully transformed Boro's fortunes, eventually guiding them to a top-half finish. Boro ended the season top of the form table after four consecutive league wins, the first such run since 1998. Despite a magnificent first half of the season, however, Boro failed to capitalise and eventually finished seventh in the league, missing out on the play-offs by five points and one position.

Following a poor run of form of 2 wins in 12 games in the 2013–14 campaign, on 21 October 2013, nearly three years after his arrival, Tony Mowbray left the club with immediate effect. Aitor Karanka, a former Spanish defender and assistant coach at Real Madrid to José Mourinho, became the new Middlesbrough manager on 13 November 2013, signing a two-year contract. He became the first non-British manager at the club, which finished the season 12th in the final league standings.

In his first full season in charge, Middlesbrough finished fourth and thus qualified for the 2015 Football League play-offs. After seeing off Brentford 5–1 on aggregate in the semi-final, the club lost 0–2 to Norwich City at Wembley Stadium in the final. Under Karanka's tutelage, Patrick Bamford, on loan from Chelsea, won the Championship Player of the Year award for 2014–15. The next season, Middlesbrough were promoted back to the Premier League after finishing second in the Championship in 2015–16, drawing 1–1 with Brighton & Hove Albion on the final day of the season. 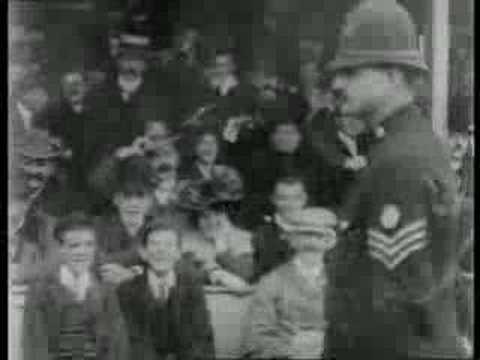 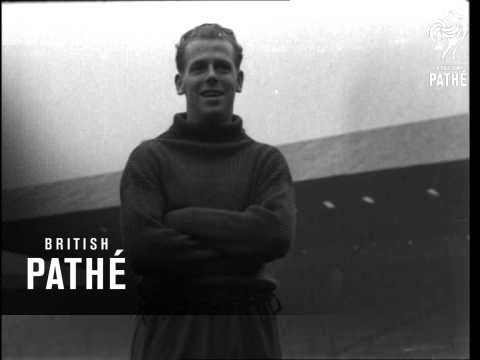 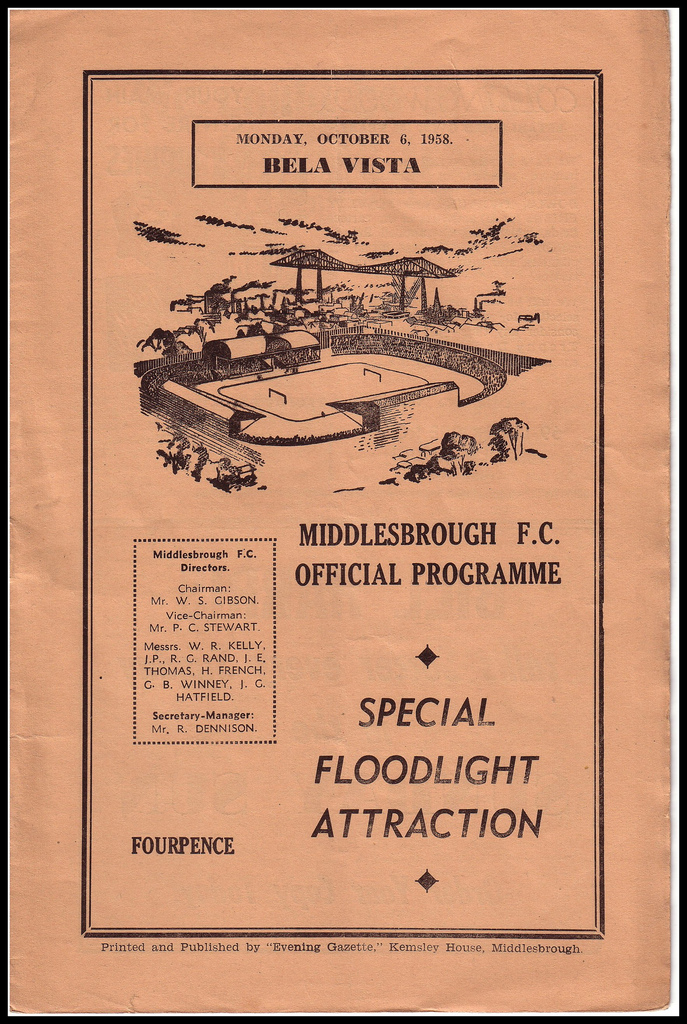 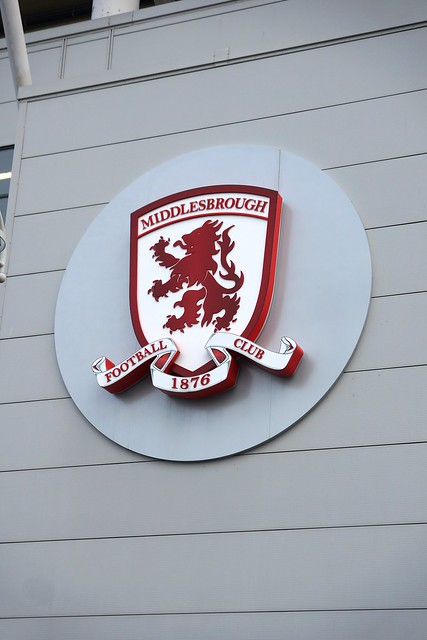 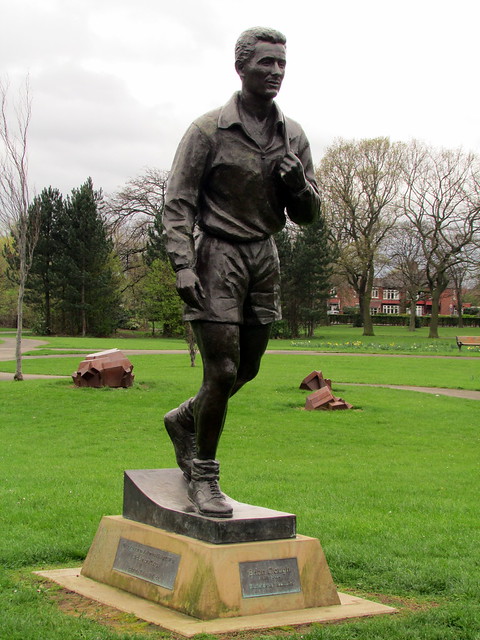 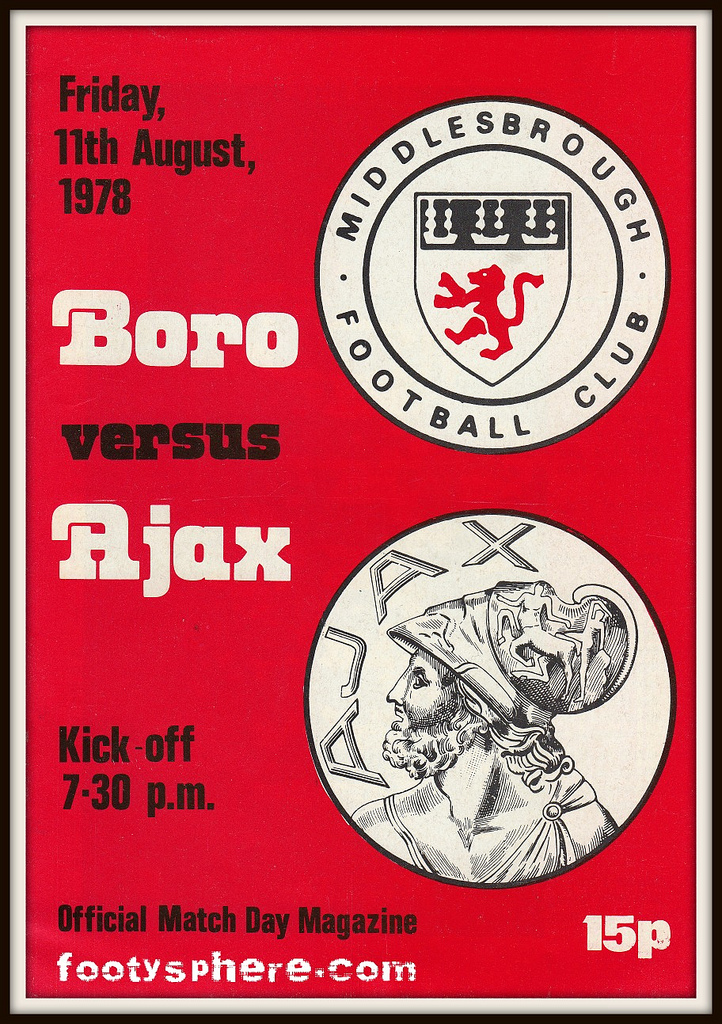 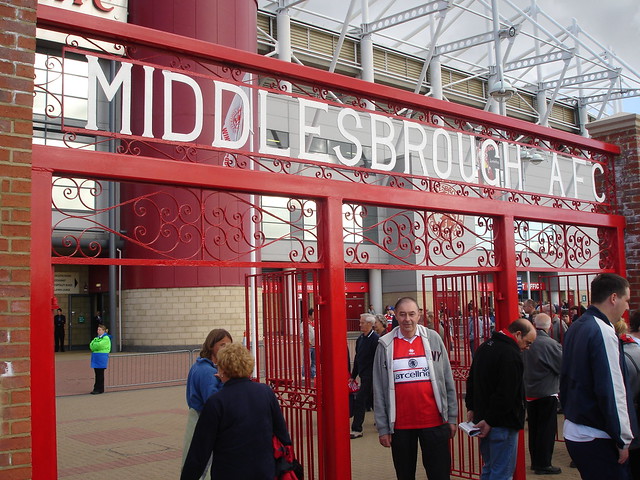 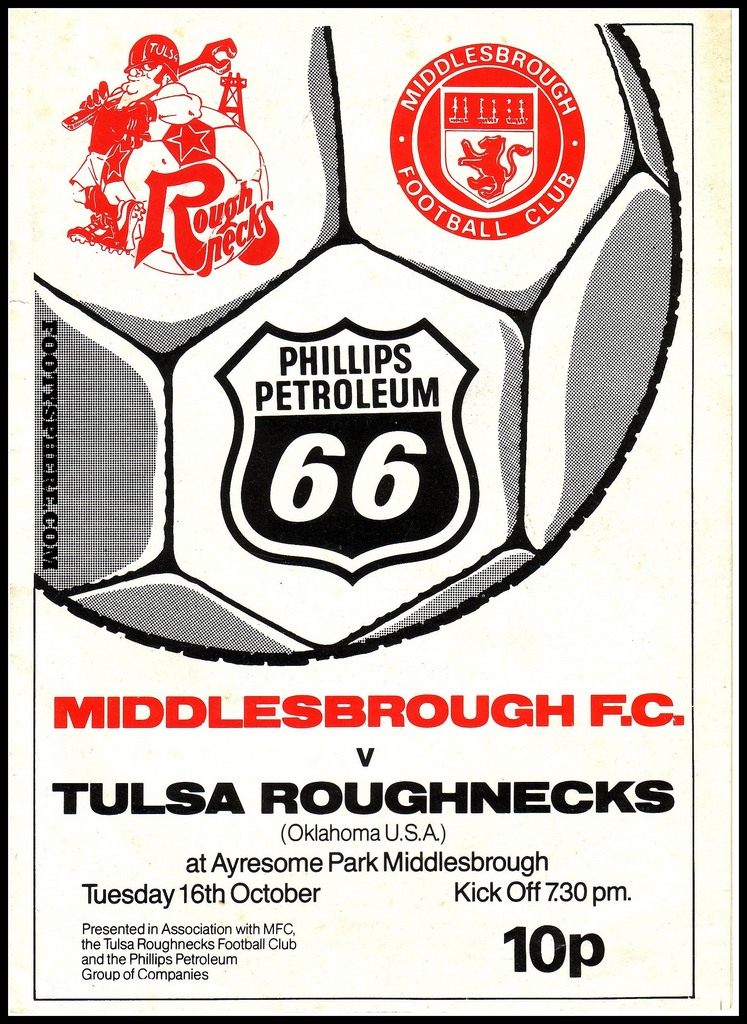 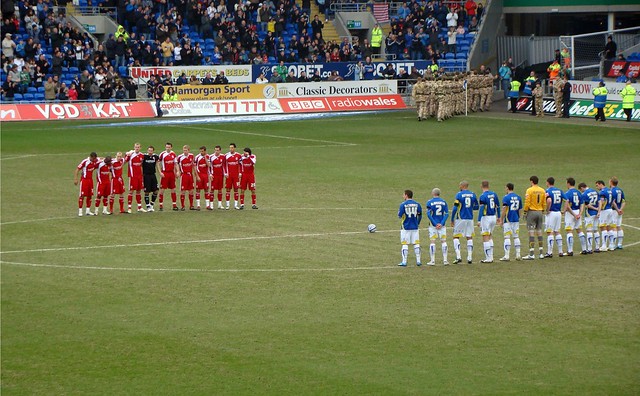 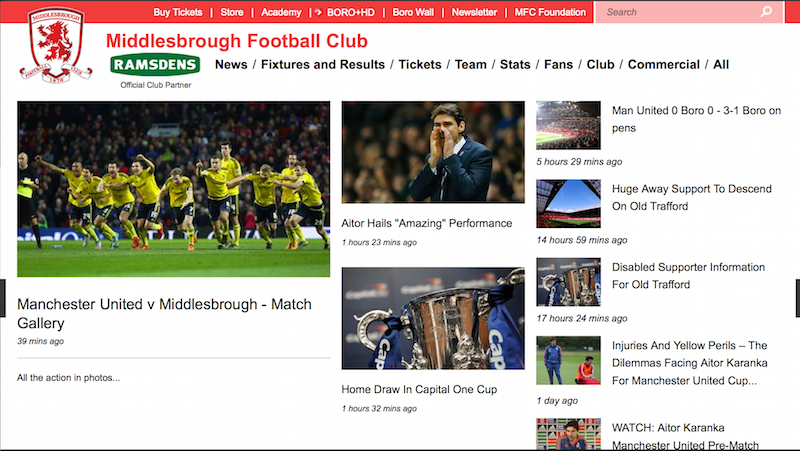 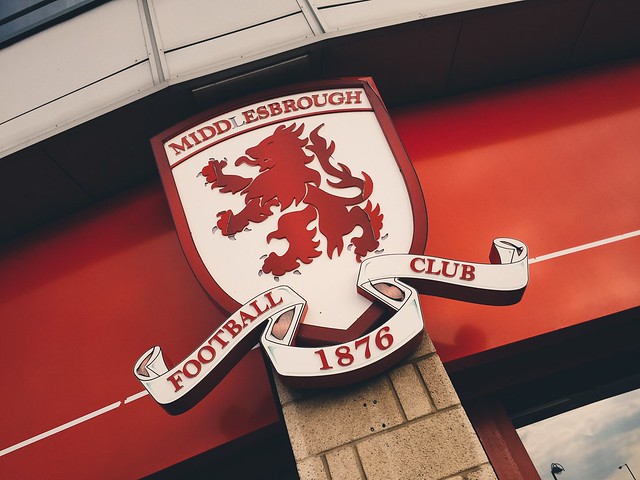 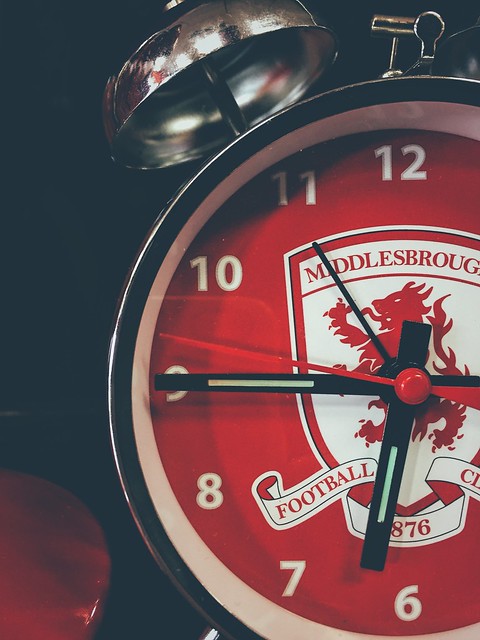