Ian La Frenais, OBE, is a screen writer who was born in Monkseaton, Whitley Bay, on 7th January 1936. He is best known for his creative partnership with Dick Clement; together they wrote successful television series, including The Likely Lads, Whatever Happened to the Likely Lads?, Porridge and Auf Wiedersehen Pet. Ian is patron of the Whitley Bay Film Festival, established 2010.

Ian La Frenais, OBE (born 7 January 1936), is an English writer best known for his creative partnership with Dick Clement. They are most famous for television series including The Likely Lads, Whatever Happened to the Likely Lads?, Porridge and its sequel Going Straight, Lovejoy and Auf Wiedersehen, Pet.

His father was an accountant and as a child at Park Primary School in Whitley Bay La Frenais enjoyed art and writing. He then attended Dame Allan's Boys School, Newcastle upon Tyne and completed his National Service in the British Army. After working as a salesman for a tobacco company he began composing songs for a weekly satirical programme on Tyne Tees Television and moved to London where he worked for a market research company.

In addition to The Likely Lads, Whatever Happened to the Likely Lads?, Porridge, Lovejoy and Auf Wiedersehen, Pet La Frenais and Clement have also written various other work for TV and films. Their works include; Hannibal Brooks, The Commitments (with Roddy Doyle), Still Crazy, Goal!, Flushed Away, Across the Universe and cinema versions of some of their own TV programmes.

In addition to his long-running collaborations with Clement, La Frenais has created, written and/or contributed to many other TV series including Thick as Thieves (1974), The Two Ronnies, several episodes of the BBC's Comedy Playhouse, The Other 'Arf (1980–81), the hit 1990s BBC detective series Spender (co-written with actor/singer Jimmy Nail), and episodes of Tracey Ullman's sketch comedy series Tracey Takes On....

Since 1984, he has been married to artist Doris Vartan, the mother of actor Michael Vartan. He was appointed an OBE in the Queen's 2007 Birthday Honours list.

Text from Wikipedia, available under the Creative Commons Attribution-ShareAlike License (accessed: 05/09/2016).
Visit the page: Ian La Frenais for references and further details. You can contribute to this article on Wikipedia.
People in History Whitley Bay Film Festival Films and Cinema 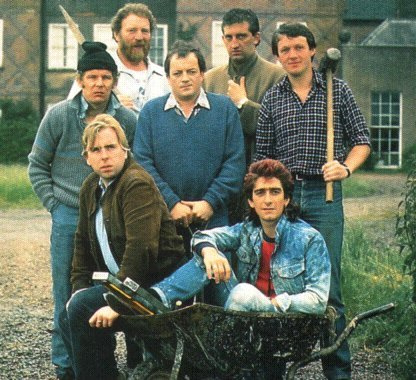