Gateshead Interchange is a transport interchange in the centre of the town of Gateshead, England. It is served by the Tyne & Wear Metro, whose station is underground, as well as local bus services. The bus concourse was used by over 3.8 million passengers, making it the busiest bus station in Tyne and Wear.

The interchange opened on 15 November 1981, as part of the third stage of the Tyne & Wear Metro system, which included the main underground sections in the centre of Newcastle upon Tyne, as well as the Queen Elizabeth II Bridge across the River Tyne. It replaced the nearby Gateshead railway station, which closed shortly after the Metro station was opened. In March 2004, the interchange redevelopment around the existing Metro station was completed by Jefferson Sheard Architects, and the large-scale sculpture "Opening Line", by Danny Lane was unveiled. The redeveloped interchange was officially opened by Secretary of State for Transport Alistair Darling.

Gateshead Interchange is the only underground station in Gateshead however it may not be once new stations are built at the Gateshead Quays and the Metrocentre. There is a sub surface station at Heworth.

The Metro station at the Interchange is situated below ground and is situated on both the Yellow and Green Lines. There is a regular service northbound towards Newcastle over the sixth Tyne Bridge crossing. Trains go onwards towards Newcastle Airport (Green line) and the Coast (Yellow line). Southbound services head towards Sunderland (Green line) and South Shields (Yellow Line).

The design of the station is very different from the underground stations in central Newcastle, due to the different rock structure south of the River Tyne. The running tunnels are square rather than circular in cross-section, and Gateshead station was excavated as a box.

Lighting in the station was improved by the installation of brighter and more energy efficient light bulbs in July 2014.

When opened, the bus station (including the travel centre) was operated by the Northern General Transport Company rather than the Tyne & Wear Passenger Transport Executive, despite being finished in PTE house style. Since then, the bus station has been completely rebuilt.

Express bus route X66 links Gateshead Interchange with Gateshead's MetroCentre. There is a regular Q1 QuayLink bus service that goes from the Interchange, to other local attractions such as The Sage and Baltic Centre for Contemporary Art and onwards to Newcastle city centre.

Text from Wikipedia, available under the Creative Commons Attribution-ShareAlike License (accessed: 04/12/2017).
Visit the page: Gateshead Interchange for references and further details. You can contribute to this article on Wikipedia. 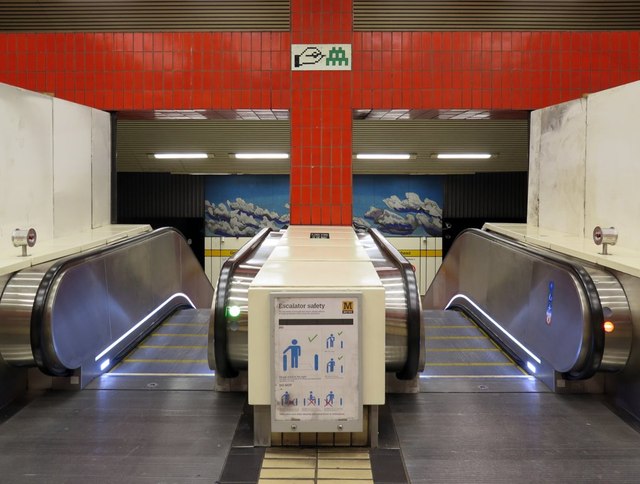 Gateshead Metro Station (above the escalators)

Gateshead Metro Station (above the escalators)