DUNDRAW, a township, in the parish of Broomfield, union of Wigton, Cumberland ward, and E. division of the county of Cumberland, 3 miles (W.N.W.) from Wigton; containing, with Kelsick, 329 inhabitants

Dundraw is a hamlet and a civil parish near Abbeytown, in the Allerdale borough of Cumbria, United Kingdom. It is located in the North West of England and Cumbria County Council, based in Carlisle, is the local county council. The hamlet is located approximately three-and-a-half miles east of Abbeytown, nine-and-a-quarter miles south-east of Silloth-on-Solway, three-and-a-quarter miles north-west of Wigton, and fourteen miles south-west of Carlisle.

The first part of the name is Brittonic drum-, which in etymological terms means "a ridge" (Welsh drum). The second element is *draɣïn, meaning "thorns" (Welsh draen). Alternatively, the name may be derived from Gaelic equivalents of the aforementioned words. The loss of the final syllable is attributed to Old Norse speakers substituting the first element, which Middle English speakers ‘translated’ as dræġ, meaning "a drag, a steep slope", omitting *–ïn as this was taken to be the Scandinavian suffixed definite article.

Dundraw is a hamlet north of the B5302, which is its nearest main road. The River Waver runs to the east of the hamlet. Dundraw is very small, consisting of only 59 households according to the 2001 Census. The nearest train station to Dundraw is Wigton Station, which is about 2 miles away.

It is in the Allerdale House, Workington, Cumbria, that plans concerning Dundraw take place. Each plan contains a list of any documents submitted, these are available to the public (subject to restriction of their disclosure). The Leader of the Council is Alan Smith and the Deputy leader is Barbara Cannon. The Mayor of Allerdale is Joe Holiday and the deputy Mayor is Carole Armstrong.

Since 1980, the rate of population change has slowed over England and Wales from about 14% annual growth to around 6% annual growth. The rate within Dundraw is much slower than this, but has also fluctuated more than the rest of the country (due to the small population).

Both these population statistics reflect population growth across England and Wales. Comparing this to Dundraw, it can be seen that the smaller population of the village has fluctuated a lot more than the rest of the country. In the district of Allerdale there is a total estimated population of 94,000 (as of mid-2010).

According to the 1991 Census, the population of Dundraw was 180 residents, by the 2001 Census this population figure had dropped to 160. That is an 11.1% decrease in population change. Compared to other parishes in Cumbria, Dundraw has a relatively high percentage population change rate compared to actual population change, due to the smaller population. The 2001 census indicated that there were 59 households in Dundraw and has a total headcount of 167 (79 males and 88 females).

Places to visit near Dundraw include the River Wampool, which is about 3 miles away as the crow flies. Other nearby villages which are of interest include Kelsick, Lessonhall, Waverbridge and Waverton, which are all less than a mile away from the centre of Dundraw.

The Finglandrigg Woods National Nature Reserve (CA7 5DR) is about 6 miles away from Dundraw. It mainly consists of lowland grass and woodland areas. The area attracts visitors because of its wildlife; the red squirrel, roe deer, brown hare and wood mouse can all be found here as well as over 40 species of birds. Natural England works to manage and maintain this area and its wildlife.

The Drumburgh Moss National Nature Reserve is about 7 miles away from the centre of Dundraw; it covers about 121.5 hectares of and has a number of walks and trails. There are various different species to be seen depending on the season; the nature reserve is open all year open round.

Wordsworth House is about 13 miles away from Dundraw, in Cockermouth, and is the childhood home of William Wordsworth. It is a beautiful Georgian townhouse, and offers its visitors to experience the 18th century. Events take visitors back to the 1770s with a full packed programme of poetry inspired activities.

Borrowdale is about 17 miles away from the centre of Dundraw. It is a stunning view of the British lakeland landscape, around Derwentwater. The national trust looks after most of the valley, preserving the environment for visitors to still enjoy for years to come.

Text from Wikipedia, available under the Creative Commons Attribution-ShareAlike License (accessed: 30/10/2020).
Visit the page: Dundraw for references and further details. You can contribute to this article on Wikipedia.
Cumbria Bromfield Parish, 1848 Dundraw Civil Parish 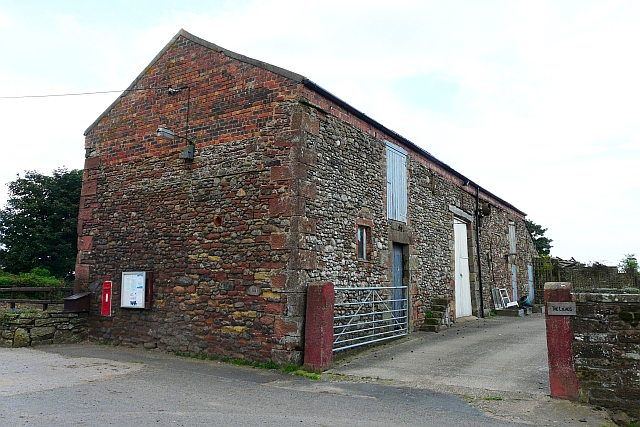 An old barn at Dundraw

An old barn at Dundraw