Drigg is a village situated in the civil parish of Drigg and Carleton on the West Cumbria coast of the Irish Sea and on the boundary of the Lake District National Park in the Borough of Copeland in the county of Cumbria, England.

Drigg sits to the north of the River Irt, with Carleton to the south of the river. The river runs from Wastwater lake to the Irish Sea. There are three bridges over the river in the parish; the main bridge is in Holmrook which takes the A595 road over the river. The Cumbrian Coast Line railway crosses the River Irt at the head of the tidal estuary where the Irt joins the River Mite at Ravenglass. There is an old small packhorse bridge in the Drigg Holmes which does not take vehicles.

Drigg railway station is on the Cumbrian Coast Line.

The parish has a number of areas of natural interest: the sandy beach and dunes, Hallsenna Moor and Drigg Holmes. Part of the dunes are an important bird reserve, a local nature reserve and a Site of Special Scientific Interest.

On 2 June 2010, Carleton became one of the settlements involved in a killing spree spanning Cumbria, when 52-year-old Derrick Bird shot and killed a person in the village.

Drigg is within the Copeland UK Parliamentary constituency, Trudy Harrison is the Member of parliament.

During WW2 a Royal Ordnance Factory (ROF Drigg) was established at Drigg between the railway line and the sea. This is now the site of the Nuclear Decommissioning Authority low-level radioactive waste repository. The site, which was opened in 1959 by the United Kingdom Atomic Energy Authority, covers about , and holds about one million cubic metres of radioactive waste, although historic disposal records are incomplete. Much of the waste came from the nearby Sellafield nuclear complex.

Text from Wikipedia, available under the Creative Commons Attribution-ShareAlike License (accessed: 30/10/2020).
Visit the page: Drigg for references and further details. You can contribute to this article on Wikipedia.
Cumbria Drigg and Carleton Civil Parish Drigg Parish, 1848 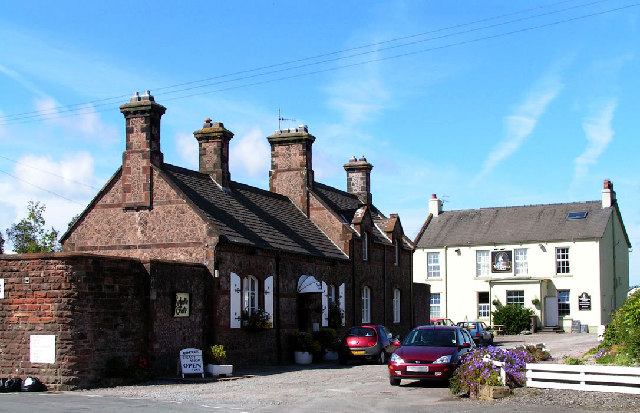 Drigg Station and the Victoria Inn

Junction of Station Road and B5344 in Drigg

Drigg Parish, 1848
- DREGG (St. Peter), a parish, in the union of Bootle, Allerdale ward above Derwent, W. division of Cumberland, 3 miles (N.W. by N.) from Ravenglass; containing, with the township of ...

Drigg Station and the Victoria Inn

Junction of Station Road and B5344 in Drigg

Drigg Parish, 1848
- DREGG (St. Peter), a parish, in the union of Bootle, Allerdale ward above Derwent, W. division of Cumberland, 3 miles (N.W. by N.) from Ravenglass; containing, with the township of ...