Robson's Smokehouse is located on Haven Hill, a short distance from the harbour in Craster. It is the only remaining smokehouse in Craster and still uses traditional methods for oak smoking kippers and salmon. Kippers are smoked herring.

"In years gone by the herring were landed in the small harbour and taken directly to the curing sheds. Here the herring were sorted, some to be salted down in barrels for export to Europe and the remainder to be kippered. Over the years Craster kippers have earned an enviable reputation as one of the finest kippers in Britain....Built in 1856 by the Craster family, 'Robsons Smokehouse' is now the only smokehouse in Craster. James William Robson moved to Craster around 1890, arriving in Craster from a herring yard in Newton. He later bought the smokehouse from the Craster family and the business was born in 1906. From then 'Robsons Smokehouse' passed through four generations and today is run by Neil Robson. His father Alan, still keeps a keen eye on the business and visits the smokehouse every day. The traditional methods of smoking are still used today..."

Craster kippers are kippers from the Northumberland village of Craster. They have been acclaimed as the best British kipper.

Like the Newmarket sausage or the Stornoway black pudding, the Craster kipper (sometimes called by aficionados simply "the Craster") is a British food named after, and strongly associated with, its place of origin. Although the herrings used for Craster kippers may not be strictly local, the defining characteristic of the Craster kipper is that the smoking process takes place in a smokehouse located in or around the village of Craster.

Clarissa Dickson Wright has named Craster as the birthplace of the kipper. There is, however, some dispute over this – other places, including the nearby town of Seahouses, also claim this distinction.

Although a long-standing tradition in Craster, commercial kipper production is currently only continued there by L. Robson & Sons, using their 100-year-old smokehouses.

The preparation process begins with selected raw North Sea herring, known locally as "silver darlings". These are split, gutted and washed, soaked in brine, and then taken to the smokehouse where they are cured over smouldering oak and white wood shavings for sixteen hours. The famous smokehouse is unmistakable — a stone building often with white plumes pouring out of the wooden vents in the roof.

In appearance a Craster kipper is still recognizably a fish; the head is preserved and the natural colours of the skin are tanned golden by the oak smoke. The flesh has a distinctive reddish-brown colour.

It has been said that comparing the Craster kipper with a common commercial processed kipper is like "comparing a fillet steak with a cheap burger", and that "on the tongue, the [Craster] kipper is as delicate, as sophisticated, as the finest smoked salmon in the world and costs but a fraction of the price."

Craster kippers have been described as "the best", although that claim has also been made of other British kippers such as Loch Fyne kippers.

Text from Wikipedia, available under the Creative Commons Attribution-ShareAlike License (accessed: 02/01/2021).
Visit the page: Craster kipper for references and further details. You can contribute to this article on Wikipedia.
Craster 1856 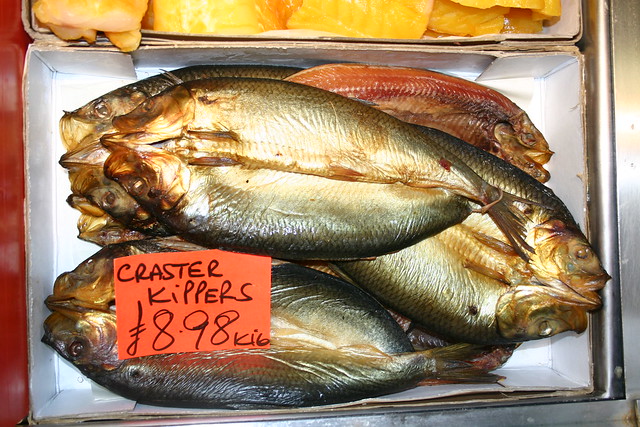 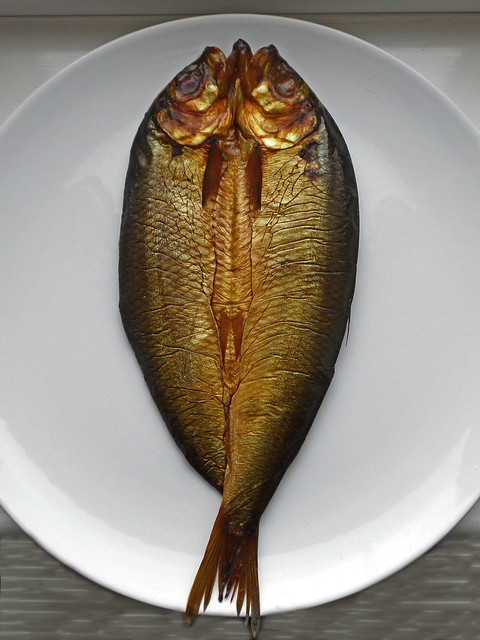 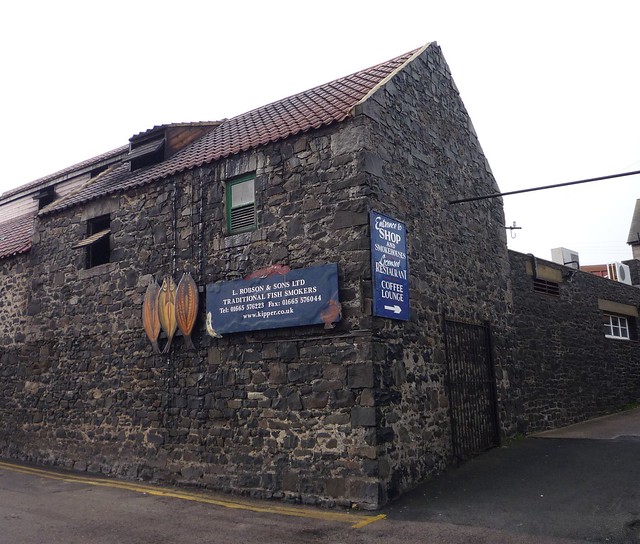 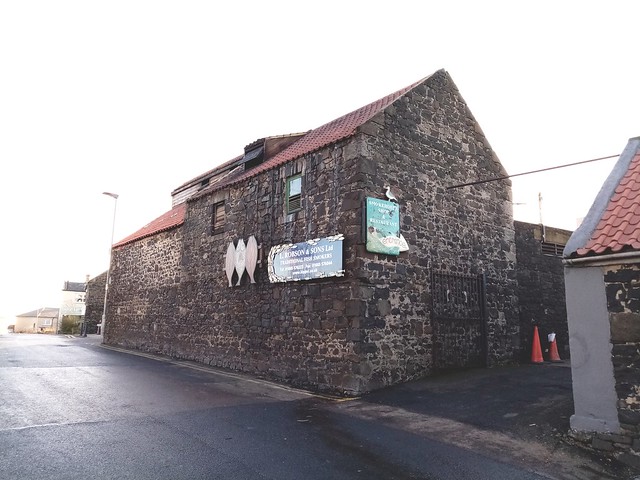 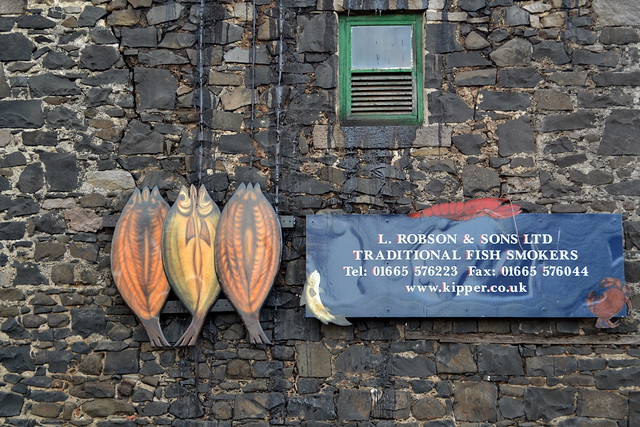 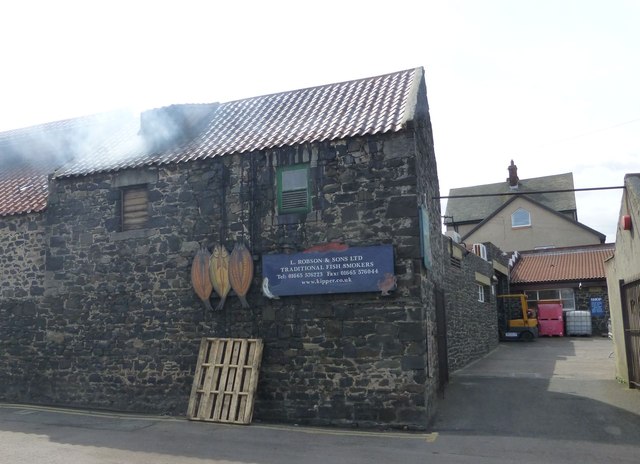 A smoking smoke house in Craster 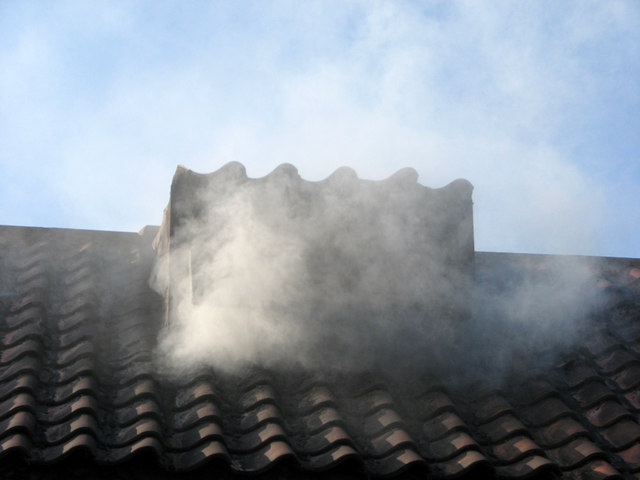 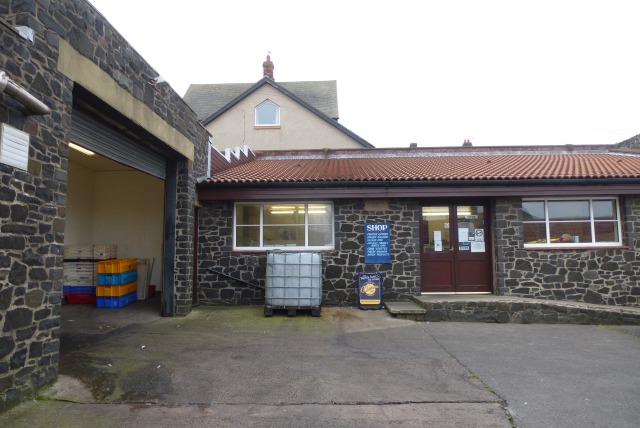 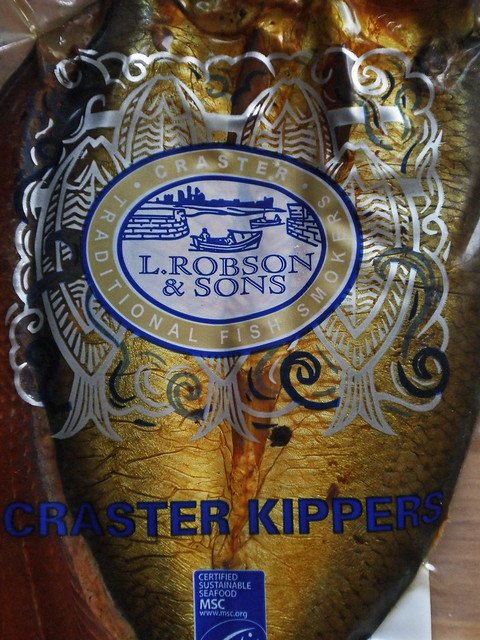 L. Robson & Sons - Craster
- "...In years gone by the herring were landed in the small harbour and taken directly to the curing sheds. Here the herring were sorted, some to be salted down in ...

A smoking smoke house in Craster

L. Robson & Sons - Craster
- "...In years gone by the herring were landed in the small harbour and taken directly to the curing sheds. Here the herring were sorted, some to be salted down in ...