BRANDON, a township, in the parish of Eglingham, union of Glendale, N. division of Coquetdale ward and of Northumberland, 4 miles (N.N.W.) from Whittingham; containing 147 inhabitants. It comprises 1,020 acres, mostly arable land, with about 20 of wood; the surface is undulated, and the soil light and gravelly, and good for barley and turnips. Brandon White House, to the east of the village, was the seat of the Collingwood family, who possessed the estate for a long period of years. A chancel wall and numerous tombs indicate the site of an ancient church.

Brandon is a village in Northumberland, in England. It is about north-west of Alnwick and south of Wooler in the Breamish Valley, just off the A697 north of Powburn.

The village, or hamlet, is actually all one farm, farmed by the Shell family since at least the late 19th century. On the north side of the main road is a line of tied cottages and the old blacksmith's shop, still in good condition though lacking a blacksmith. On the south side is the traditional square of farm buildings and the Grade B listed farm house which now also provides 'bed and breakfast' accommodation. Hidden in the corner of a small paddock next to the road is the mill race, apparently just a line of very large flagstones but covering a deep and well preserved stone channel, which shows that the traditional square farm buildings once contained a mill. Some more modern buildings have been added on, mostly to the west end of the farm, however the older buildings are still in good original condition.

The farm has a mixed arable, livestock and contracting business. They were spared both the BSE and Foot & Mouth epidemics, in the first case by always having fed organic feeds free from animal protein.

Brandon is in the parliamentary constituency of Berwick-upon-Tweed.

Text from Wikipedia, available under the Creative Commons Attribution-ShareAlike License (accessed: 06/11/2016).
Visit the page: Brandon, Northumberland for references and further details. You can contribute to this article on Wikipedia.
Northumberland Eglingham Parish, 1848 Brandon - description from 1825

Ford over the River Breamish at Brandon 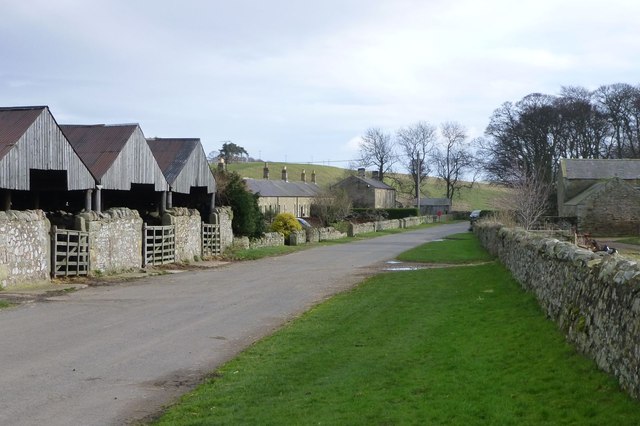 Ford over the River Breamish at Brandon