Brandon is pleasantly situated on the north side of the Breamish at the southern extremity of the Cheviot Hills two miles west from Beanley. It consists of one farmhold and about sixteen inhabited houses. At a little distance east from the village stands Brandon White House, which was the seat of Sir Daniel Collingwood, lineally descended from Cuthbert Collingwood, the renowned Border chieftain who distinguished himself so much in the Border wars in the 16th century. Sir Daniel in the earlier period of his life, was chaplain, and afterwards sword bearer to king Charles II. His extensive landed property was divided among his six sons, from whom sprung many able and upright magistrates, and skilful officers in both the army and navy, as will be hereafter particularized. The only remaining branches now are Henry Collingwood Esq of Lilburn Tower, John Collingwood Esq of Chirton and the sons of the late T Collingwood MD of Sunderland, J Collingwood of Howburn in Glendale Ward was attainted in 1715 and fled to France with his wife a Selby also of an ancient family where they were attacked with a typhus fever and both died. They left two sons John and George the former at that time an apprentice to a merchant in Newcastle and the latter about seven years old was left to the care of the steward James Fowler who bred him to agriculture and set him up in a small farm. The estate was mortgaged to the Jolliffs. John was grandfather to Admiral Lord Collingwood and George was grandfather to the late Dr Collingwood Brandon White House was in the possession of Lancelot Allgood Esq of Newcastle upon Tyne about the end of the 17th century. On his death in 1701 it devolved on his nephew Isaac Allgood Esq who was succeeded by his son Sir Lancelot Allgood of Nunwick. It next came into the possession of the late James Allgood Esq who was succeeded by his eldest son RL Allgood Esq.

Eneas Mackenzie. An Historical, Topographical, and Descriptive View of the County of Northumberland, and of Those Parts of the County of Durham Situated North of the River Tyne, with Berwick Upon Tweed, and Brief Notices of Celebrated Places on the Scottish Border. Mackenzie and Dent, Berwick-upon-Tweed, 1825. 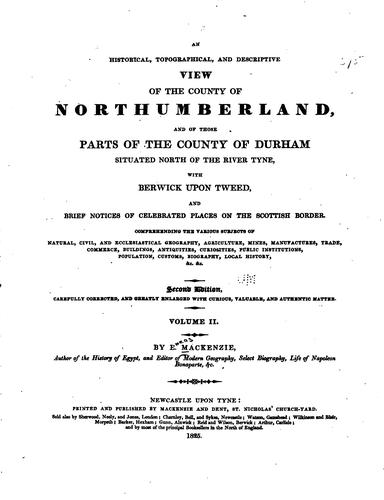