Bede Academy in Blyth is a 3 to 18 yrs academy, which was opened in September 2009. The academy has 2 sites: the 'North' site is the secondary school on Sixth Street, located on the site of the former Ridley High School, and the 'South' site is the primary school on Shearwater Way, located on the site of the former South Beach First School. The new school buildings were constructed in 2009, designed by Howarth Litchfield Partnership (architects). The school is sponsored  by the Emmanuel Schools Foundation, and is named after St Bede.

Bede Academy is a 3–18 academy located in Blyth, Northumberland, England. Opened in September 2009, it is run by the Emmanuel Schools Foundation.

In October 2010, Vardy announced his retirement as sponsor of the group and its transition to the United Learning Trust. After exploring the integration of the ESF schools into the ULT, it was later announced in February 2012 that the Department for Education had agreed in principle to the four schools returning to their own independent governance.

For the 2012 academic year, the former Sixth Form block of Ridley High School, which had avoided demolition with the rest of the former high school as it served as the site office and base for the academic and administrative staff developing the new Academy, was redeveloped to house the Sixth Form. Two large rooms with numerous computers named Study Centres, a common room, a careers office and an additional classroom were opened on the ground floor. The Emmanuel Schools Foundation central services staff, previously at Aykley Heads, Durham, moved shortly afterwards to the first floor of the newly named Trinity House.

In addition to the sports facilities on the North and South sites, the academy also owns the land of the former Delaval Middle School site which was developed into a cricket pitch with pavilion along with a number of other sports facilities.

During the school's initial development, Nigel McQuoid, former Principal of Emmanuel College, Gateshead and subsequently ESF's Director of Schools, was the Executive Principal of Bede Academy to whom the Principals of the Primary and Secondary Years reported. McQuoid left the organisation a few months prior to the completion of the building and the school's opening.

From 2009 to 2010 Liz Clubbs, formerly Headteacher at South Beach First School, was the founding Principal of the primary years with Gwyneth Evans, who was previously a Vice-Principal at sister school Emmanuel College, Gateshead, leading the secondary years. Gwyneth Evans is now Principal of the whole school.

Text from Wikipedia, available under the Creative Commons Attribution-ShareAlike License (accessed: 08/05/2018).
Visit the page: Bede Academy for references and further details. You can contribute to this article on Wikipedia. 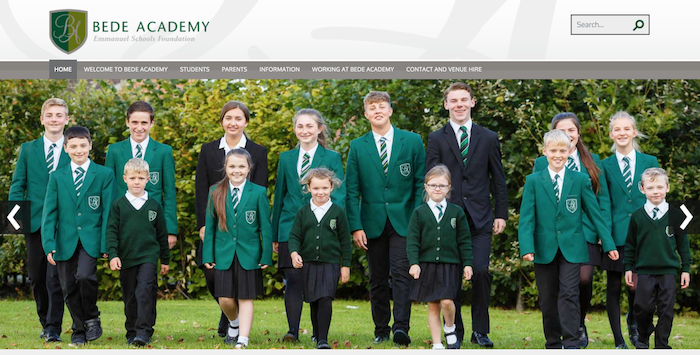 Privately-funded school approved
- BBC, 22nd November, 2007. "A shake-up of education in Northumberland is under way after plans to create a privately-funded academy were given the go-ahead. Bede Academy in Blyth, sponsored by ...

Privately-funded school approved
- BBC, 22nd November, 2007. "A shake-up of education in Northumberland is under way after plans to create a privately-funded academy were given the go-ahead. Bede Academy in Blyth, sponsored by ...