This war memorial is located in Redheugh Gardens, off Cliff Terrace in Headland, Hartlepool. The bronze statue of a winged figure "Triumphant Youth" was unveiled by the Earl of Durham in a ceremony on the 17th of  December 1921. The statue and memorial wall was dedicated to the civilians and servicemen killed in the First World War, including those lost in the naval bombardment of Hartlepool in 1914. The dedication was later extended to those lost in the Second World War.

Redheugh Gardens War Memorial or Hartlepool War Memorial is a World War I and World War II memorial located in the Headlands of Hartlepool, County Durham, England. It commemorates Hartlepool military servicemen and civilians who lost their lives in both wars – with specific mention of the first British soldiers to have died on British soil during 16 December 1914 Raid on Scarborough, Hartlepool and Whitby of World War I. In 2001 a plaque was unveiled to memorialise 240 men and women who succumbed from 1919 to 1967 during war and conflict.

Raid on Scarborough, Hartlepool and Whitby

The death of the first soldiers on British soil during World War I is commemorated by the Redheugh Gardens War Memorial, which was unveiled seven years and one day after the East Coast Raid.

The memorial, commissioned by the War Memorial Committee and designed by Philip B. Bennison, commemorates the servicemen and civilians who lost their lives in World War I. The main figure on the memorial is the draped Winged Victory (also called Triumphant Youth). The unveiling program describes it as: "The winged figure of Triumphant Youth which crowns the column, symbolizes a spiritual freedom and regeneration which comes through pain and sacrifice." It is sculpted in bronze and sits upon several pedestals made of limestone and ashlar. First below the sculpture is a chamfered plinth and cornice that carries on each of its four faces the bronze: the Hartlepool town seal, the Brus family (Hartlepool overlords) coat of arms, the coat of arms of Prince Bishops of Durham and, representing the Raid on Hartlepool, a 1914 dated cartouche of the lighthouse. The bronze panels were made by R.H. Machin. The pedestal at the base is a square shaft that is rockfaced and coursed.

The memorial inscriptions are:

It was made a Grade II structure has been listed with the British Listed Buildings since 1985. In 2002 the memorial was renovated, including new gates, railings and walls.

Designed by Philip B. Bennison, ARCA, the Whitbed Portland stone wall was first built as a World War I memorial, and its use was extended to memorialise those from World War II. The wall has five bronze slate panels high x wide of the names of the deceased.

The inscriptions on the first four panels are:

On a fifth panel is the inscription: "Bombardment. / The following / were killed in the / bombardment / of Hartlepool / December 16th 1914" and 52 full names. Pillars at the end of the wall contain the dates of the wars.

Funded by public subscription, the memorial was unveiled by John Lambton, 3rd Earl of Durham on 17 December 1921.

On the back of the wall is a 2001 memorial to 240 "Citizens, Servicemen and Servicewomen of the Borough of Hartlepool / who gave their lives in conflict and War during the years from 1919 to 1967." There are two bronze plaques each x with the town badge of Hartlepool and the initials and surnames of the dead. The David Timlin MBE War Memorial Appeal Fund raised the money for the plaques through public subscription, and as a result there is a commemorative plate acknowledging Timlin's efforts. The memorial plaques were dedicated on 24 June 2001.

Text from Wikipedia, available under the Creative Commons Attribution-ShareAlike License (accessed: 17/02/2017).
Visit the page: Redheugh Gardens War Memorial for references and further details. You can contribute to this article on Wikipedia.
Hartlepool Headland War Memorials Naval Bombardment of Hartlepool, 1914 War Memorial Grade II Listed Historic Buildings and Monuments in the Borough of Hartlepool Hartlepool at War 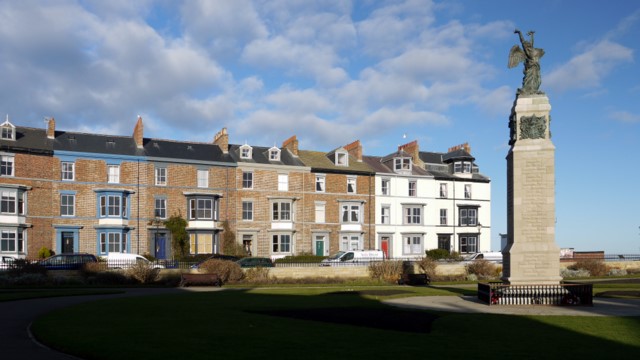 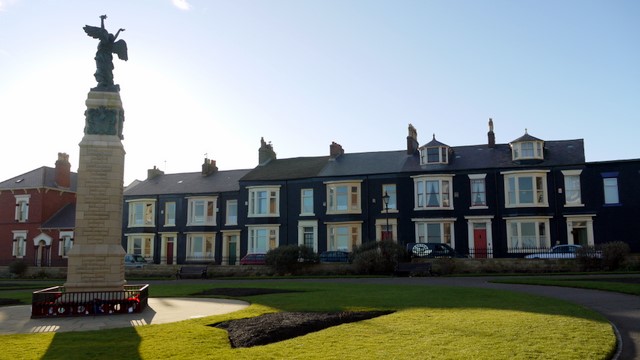 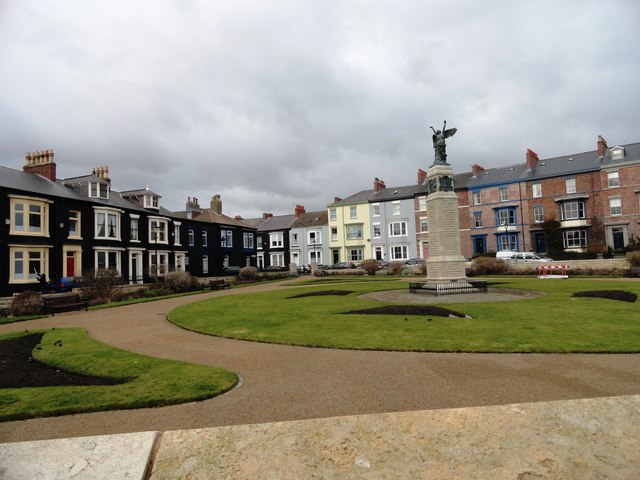 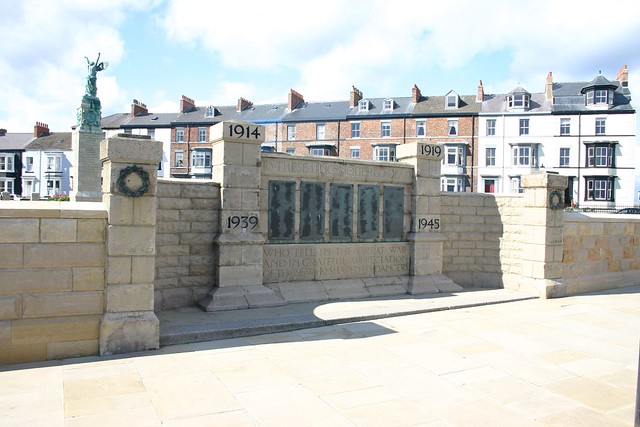 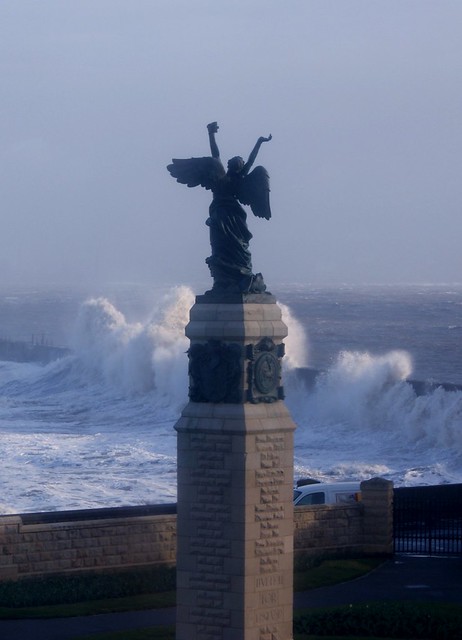 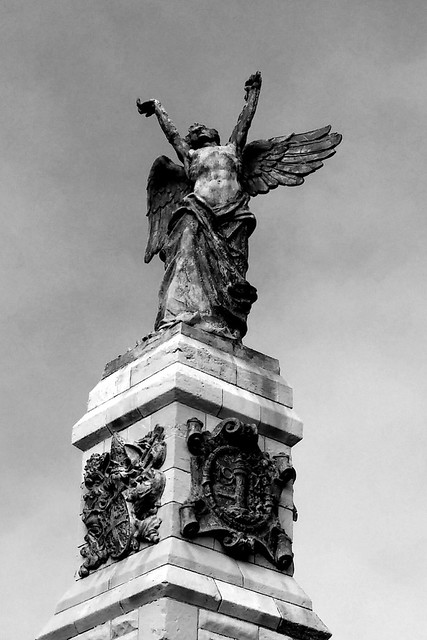 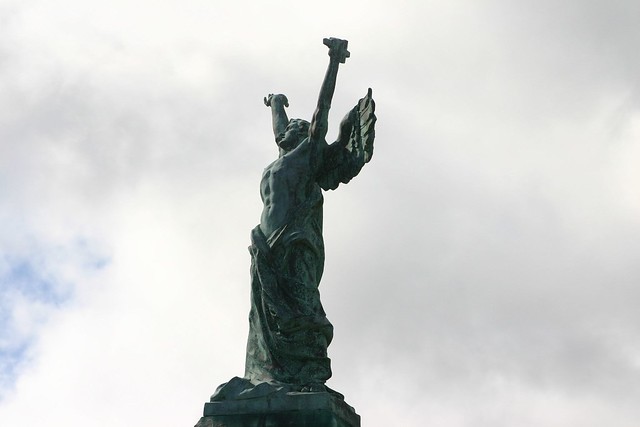 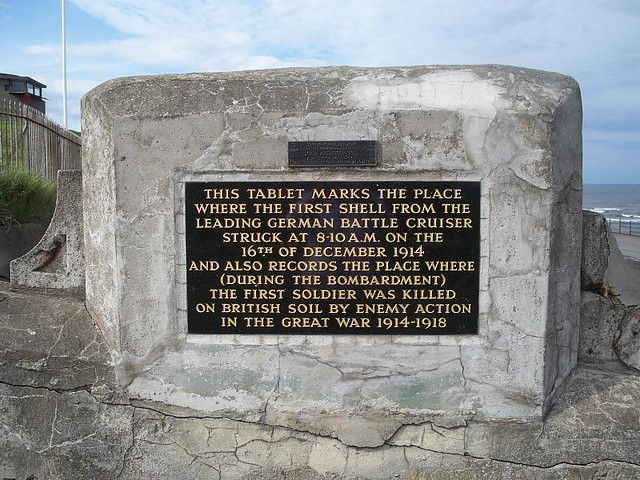 Naval Bombardment of Hartlepool, 1914
- The Imperial German Navy made major attacks on Scarborough, Hartlepool, West Hartlepool, and Whitby on 16 December 1914.&nbsp;The attack on Hartlepool killed 93, including the first soldier to be killed ...

Naval Bombardment of Hartlepool, 1914
- The Imperial German Navy made major attacks on Scarborough, Hartlepool, West Hartlepool, and Whitby on 16 December 1914.&nbsp;The attack on Hartlepool killed 93, including the first soldier to be killed ...

Historic Buildings and Monuments in the Borough of Hartlepool