ULVERSTON (St. Mary), a market-town and parish, and the head of a union, in the hundred of Lonsdale north of the Sands, N. division of the county of Lancaster; containing, with the townships of Mansriggs, Osmotherley, and Subberthwaite, and the chapelries of Blawith, Church-Conistone, Egton with Newland, Lowick, and Torver, 8,778 inhabitants, of whom 5,352 are in the town, 22 miles (N.W.) from Lancaster, and 271 (N.W. by N.) from London. This place derives its name, written in old records Olvestonam, from Ulpha, a Saxon lord; and was conferred in 1127, on the abbey of Furness, by Stephen, afterwards King of England. It was subsequently granted to Gilbert, who had succeeded to the barony of Kendal, and who released the inhabitants from their state of feudalism, bestowing upon them a charter, which was augmented and confirmed by his successors. The manor afterwards reverted to the crown; and being, in 1609, divided into moieties, was eventually purchased in 1736, by the Duke of Montagu, for £490, and is at present vested in the Duke of Buccleuch. A charter was obtained from Edward I., for a market and an annual fair; but it. continued to be merely nominal until the dissolution of Furness Abbey, near Dalton, the capital of that district, from which event the prosperity of Ulverston may be dated.

The town is pleasantly situated near the beautiful bay of Morecambe, and is nearly environed by hills: the streets form principal lines, and within the last few years have been lighted with gas. Good water is in abundance, a stream flowing through the town; the celebrated spring called the Lightburn, remarkable for its purity, contributes to the supply, and water is always found at a depth of about 20 feet, under a bed of gravel. The air is salubrious, the inhabitants very healthy, and remarkable for longevity, a fact evidenced in the RegistrarGeneral's reports. There are a theatre, an assemblyroom, and a subscription library containing 5000 volumes, many of them standard works; also a parochial, a clerical, and a circulating library; and, besides other institutions, a banking-house and a savings' bank. The market-place occupies a central position at the junction of streets from the north, south, east, and west. The peninsular situation of the town led to the appointment of mounted guides to direct travellers across the Sands, who were paid by government to be in attendance from sunrise to sunset, while the channel was fordable; but this arrangement has been partially superseded by the construction of a road to Carnforth, under an act of parliament.

The prevailing branches of manufacture are those of cotton, linen, check, canvass for sails, sacking, candlewicks, hats, axes, adzes, spades, hoes, and sickles. The chief articles of export, in addition to some of the above, are iron and copper ores, pig and bar iron of the finest quality, the best blue and green slates, and limestone, wool, grain, butter, gunpowder, leather, hoops, basketrods, baskets called swills, crate and wheel-spoke wood, and oak and larch poles: these are principally sent coastwise, the intercourse with foreign countries being limited. There is a yard for ship-building, and the aggregate registry of ships belonging to the place is nearly 3000 tons; four or five vessels are employed in the American timber trade. Ulverston is a port within the port of Lancaster, and is little more than a mile distant from the Furness channel in Morecambe bay. In 1793 an act was obtained for making a canal one mile and a quarter in length, which opens a communication with the bay, and by means of which ships of 400 tons' burthen are safely moored in a capacious basin with extensive wharfs, and can discharge their cargoes close to the town. In 1846 an act was passed for extending the Furness railway to Ulverston. The market, granted to Roger de Lancaster in the 8th of Edward I., is on Thursday; and fairs are held on the Tuesday before Easter Sunday, on Whit-Thursday, October 7th, the first Thursday after Oct. 23rd, and, for horses, on the Tuesday preceding the first full week in January. Manorial courts leet and baron take place on the Monday next after Oct. 24th. The petty-sessions, and the meetings of the guardians of the poor, for Lonsdale north of the Sands, are held here on Thursdays weekly. The powers of the county debt-court of Ulverston, established in 1847, extend over part of the registrationdistrict of Ulverston. The parish, which was anciently included in the parish of Dalton, comprises by computation 32,640 acres, whereof about one-third is arable, and the remainder pasture, wood, and peat or moss land; the extent of ground between the north and south extremities is eighteen or nineteen miles, and the greatest breadth about three miles.

The living is a perpetual curacy; net income, £149, derived from land; patron and impropriator, T. R. G. Braddyll, Esq. The whole parish is free from the great tithes of corn and hay. The church is situated on the northern side of the town, on rising ground commanding a beautiful prospect: a Norman doorway and the tower are the only portions of the original church, the present edifice having been built in 1804. It contains a fine altar-piece, the Entombment of Christ, copied from Vandyke's picture in the Borghese Palace at Rome by Ghirardi, and presented by Mr. Braddyll: there is also a good organ by England. Trinity church was completed in 1832 from the designs of A. Salvin, Esq., of London, at a cost of £5301, and is in the early English style: the painting which adorns the altar of this edifice was also the gift of Mr. Braddyll, and is a copy, by the same artist, of the Crucifixion, by Guido, in the church of St. Lorenzo di Lucina at Rome. The living is a perpetual curacy, in the patronage of Mr. Braddyll, with a net income of £143, derived from pew-rents. In the rural parts of the parish are five separate incumbencies. The Independents, Wesleyans, and Roman Catholics have places of worship; and Sunday schools in connexion both with the churches and meetinghouses afford religious instruction to a large number of children. There are, besides, auxiliaries of the Christian Knowledge, the British and Foreign Bible, the Gospel Propagation, the Church Missionary, and London and Wesleyan Missionary, Societies.

Among the places of interest in the immediate vicinity is Conishead Priory, the seat of the Braddyll family. This splendid mansion occupies the site of a monastery founded by Gamel de Pennington for Black canons, and the revenue of which at the Dissolution was £124. 2. 1.: the conventual building was then dismantled, and the materials were sold for £333. 6. 3½. Some remains of the cemetery, pillars of the transepts, the foundation walls of the church, with several skeletons, were discovered in 1823, when preparing the site for the present building. The mansion is in the early English style, in an extensive park, with gardens exquisitely laid out, and terraces 858 feet in length: the entrance hall is 61 feet long, with painted windows of great beauty, and adorned with suits of armour; the other apartments are fitted up in a style of luxurious elegance, and contain some fine pictures. Also, may be mentioned, Bardsea Hall, a good specimen of a Swiss villa; Chapel Island, on the Sands; the bold promontory or headland, The Hoad, whence a good general view is obtained of the town and the surrounding country; and Swarthmoor Hall, in which George Fox, founder of the Society of Friends, resided, now in a dilapidated condition. His study and bedroom here are objects of great curiosity; in the latter is a substantial antique bedstead with carved posts, on which he used to repose, and which any of his followers, it is said, are permitted to occupy for a night. The Friends' meeting-house near Swarthmoor Hall is a plain structure: over the doorway is the inscription "Ex dono G. F. 1688." This was one of the first meetinghouses erected for the Society, and was a gift from George Fox himself, as the inscription imports. Richard de Ulverston, a monk of considerable eminence, and author of a work entitled Articles of Faith, was born at Ulverston in 1434.

Church Coniston (Chapelry), 1848
- CONISTONE, CHURCH, a chapelry, in the parish and union of Ulverston, hundred of Lonsdale north of the Sands, N. division of the county of Lancaster, 6 miles (S.W.) from Ambleside; ...

Subberthwaite
- SUBBERTHWAITE, a township, in the parish and union of Ulverston, hundred of Lonsdale north of the Sands, N. division of the county of Lancaster, 7&frac12; miles (N. by W.) from ... 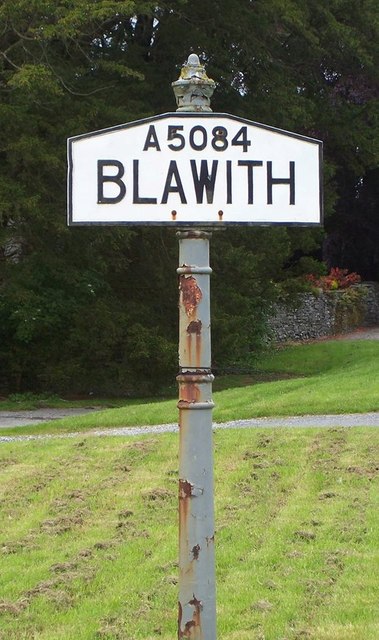 Blawith
- Overview Map Street View Blawith is a village in the South Lakeland district of Cumbria, located about 6 miles north of Ulverston and just over 1 mile of the southern ...

Lowick, Ulverston, 1848
- LOWICK, a chapelry, in the parish and union of Ulverston, hundred of Lonsdale north of the Sands, N. division of Lancashire, 5&frac12; miles (N.) from Ulverston; containing 374 inhabitants. William ...

Osmotherley Township, 1848
- OSMOTHERLEY, a township, in the parish and union of Ulverston, hundred of Lonsdale north of the Sands, N. division of Lancashire, 3 miles (N. by W.) from Ulverston; containing 298 ...

Church Coniston (Chapelry), 1848
- CONISTONE, CHURCH, a chapelry, in the parish and union of Ulverston, hundred of Lonsdale north of the Sands, N. division of the county of Lancaster, 6 miles (S.W.) from Ambleside; ...

Subberthwaite
- SUBBERTHWAITE, a township, in the parish and union of Ulverston, hundred of Lonsdale north of the Sands, N. division of the county of Lancaster, 7&frac12; miles (N. by W.) from ...

Blawith
- Overview Map Street View Blawith is a village in the South Lakeland district of Cumbria, located about 6 miles north of Ulverston and just over 1 mile of the southern ...

Lowick, Ulverston, 1848
- LOWICK, a chapelry, in the parish and union of Ulverston, hundred of Lonsdale north of the Sands, N. division of Lancashire, 5&frac12; miles (N.) from Ulverston; containing 374 inhabitants. William ...

Osmotherley Township, 1848
- OSMOTHERLEY, a township, in the parish and union of Ulverston, hundred of Lonsdale north of the Sands, N. division of Lancashire, 3 miles (N. by W.) from Ulverston; containing 298 ...