SOUTHWICK (Holy Trinity), a district parish, in the union of Sunderland; E. division of Chester ward, N. division of the county of Durham, 1¾ mile (N.W. by W.) from Sunderland; containing 1,912 inhabitants. This place, hitherto only a township of MonkWearmouth, has just been separated from it, and made a distinct parish. The estate was once the property of a family named Suthwyk, and afterwards formed part of the possessions of the Hedworths; it was also the residence of the Greys, of which family was Dr. Zachary Grey, the editor of Hudibras, whose brother George lived here. The parish comprises 1,018a. 1r. 7p., and occupies the north bank of the Wear, upon which are several limekilns, ship-yards, and earthenware and glass manufactories; the village is neatly built, and pleasantly situated, stretching along the heights above the Wear. The living is a rectory, in the patronage of the Dean and Chapter of Durham, by whom it has been endowed. The church was erected in 1842, at a cost of £1,800, defrayed by the Dean and Chapter, who also gave the site (from which is a beautiful view of the vale of Wear), and who have expended altogether many thousand pounds in the district: it is in the early English style, with a square tower. There are places of worship for Primitive Methodists and Wesleyans; and a national school built in 1836. Human bones, and sometimes entire skeletons, have been found when removing the soil above the limestone-quarries on Southwick hills. 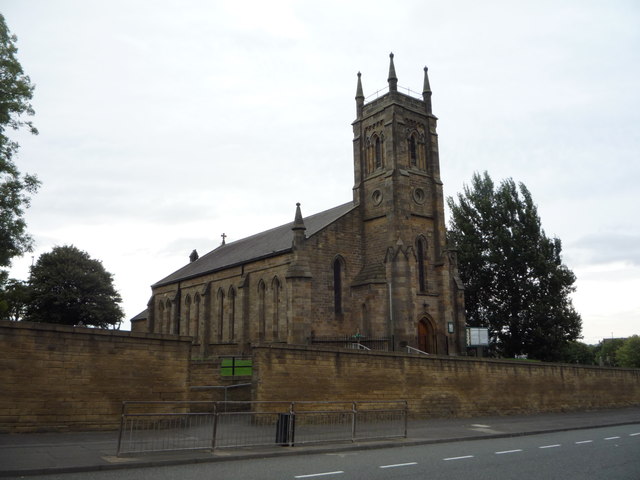 Church of the Holy Trinity, Southwick