SHERBURN HOUSE or HOSPITAL, an extraparochial liberty, in the S. division of Easington ward, union, and N. division of the county, of Durham, 2½ miles (E. by S.) from Durham; containing, according to the last census, 86 inhabitants, but now about 200, owing to the increase of its pit population. This place is usually called Sherburn House, from the legal title of its hospital, Domus Hospitalis Christi de Sherburn. The hospital was founded by Hugh Pudsey, Bishop of Durham, about 1181, and was dedicated to the Blessed Virgin, to Lazarus, and his sisters Mary and Martha; its revenue, in the reign of Henry VIII., was certified as of the value of £142. 0. 4., the society consisting of a master, several priests, and sixty-five lepers. The leprosy becoming extinct in England, the hospital was incorporated in 1585, by Queen Elizabeth, for a master and thirty brethren; and at present this is one of the most richly endowed charitable foundations in the north of England, its income amounting to several thousand pounds per annum. It is governed by a body of statutes given by Bishop Chandler in 1735, but the Bishop of Durham, as visiter, has full power to alter the statutes as he may think expedient.

Fifteen of the persons on the establishment are inbrethren, and must be single men; fifteen are out-brethren, and may, at the option of the master, be married men. The qualification is, the non-possession of property worth more than £20, birth in the county of Durham, and membership of the Church of England. The brethren are all nominated by the master, except one, who is appointed by a private family. The in-brethren have clothing and comfortable maintenance, and by the act of Elizabeth were to receive a small money payment; but this, and the larger pensions of the out-brethren, have from time to time been augmented, so as to keep pace with the value of money. The appointment of the master is vested in the visiter, and the office is not tenable with any ecclesiastical benefice which has the cure of souls; he must be at the least M.A. of Oxford or Cambridge, and by the act of 1585 is required to be in holy orders, though, by a dispensation from the crown, he may be a layman, as the appointment is now held to be lay preferment. The chaplain is also vice master, and to him the discipline of the hospital is ordinarily assigned. The livings of Bishopton, Grindon, Ebchester, and Sockburn, are in the patronage of the master, and the present master has augmented the income of each. The hospital stands on the eastern side of the small river Pidding, one of the feeders of the Wear; and forms three sides of a spacious court, the fourth being occupied by the wall of the ancient clausum and the entrance gateway. The chapel has been thoroughly restored; the dilapidated master's house has been rebuilt, and a separate house erected for the chaplain. On the re-incorporation of the hospital, it was dedicated to Christ. 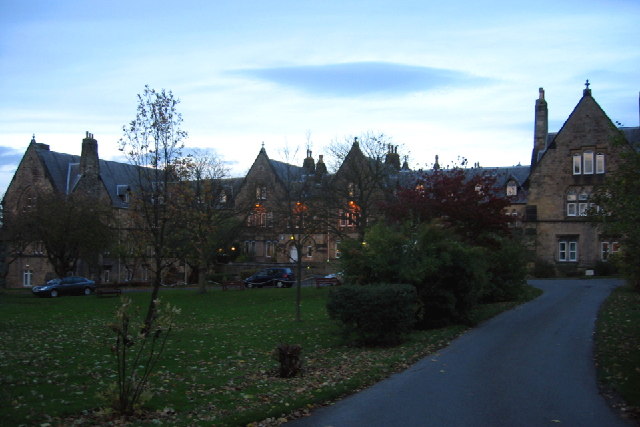