Joseph Bonomi (1739 -1808) an architect and draughtsman from Italy who built many large country houses across England. His son Ignatius Bonomi also became an architect, who designed many bridges, churches and country houses in Northern England. His other son Joseph Bonomi, the Younger (1796 - 1878), was a sculptor, Egyptologist and museum curator. Joseph Bonomi the Elder's buildings included Lambton Castle (completed after his death by his son Ignatius).

Joseph Bonomi the Elder (19 January 17399 March 1808) was an Italian architect and draughtsman who spent most of his career in England where he became a successful designer of country houses.

He was born Giuseppe Bonomi in Rome on 19 January 1739. He was educated at the Collegio Romano and then studied architecture with Girolamo Teodoli. He made his early reputation in Rome before moving to London in 1767 at the invitation of Robert and James Adam, who employed him as a draughtsman from 1768. In his early years in England Bonomi also worked as an assistant to Thomas Leverton.

He became a close friend of the painter Angelica Kauffman, whose cousin Rosa Florini he married in 1775. The next year he produced a design for a proposed sacristy for St Peter's in Rome, which may indicate that he visited his native city at around this time. In 1783 Kauffman persuaded Bonomi to move back to Rome, where she was now living. He took his wife and children with him, and the move seems to have been intended to be permanent; however the next year the family returned to London, where Bonomi was to remain based for the rest of his life.

Bonomi's earliest known independent work dates from 1784. After this he quickly became a successful designer of country houses. In 1789, he was elected an Associate of the Royal Academy, and from then on constantly exhibited architectural drawings. Joshua Reynolds, president of the Academy, had wanted Bonomi to become a full Academician, regarding him as a suitable candidate for the vacant chair of perspective; the majority of the Academicians were, however, opposed to this suggestion, and Bonomi became an associate only, and that merely through the president's deciding vote. Reynolds resigned his presidency in protest, but was soon re-elected.

In 1804 he was appointed architect of St. Peter's at Rome,

apparently as an honorary position.

In 1775 he married Rosa Florini, Angelica Kauffman's cousin. One son Ignatius Bonomi (1787–1870), was also an architect, and another, Joseph Bonomi the Younger (1796–1878), became an eminent sculptor, artist and Egyptologist.

In a paper read at the Royal Institute of British Architects in 1869, Wyatt Papworth summarised Bonomi's approach: The style adopted by him was the Italian or modernised Roman; and he sought to obtain the characteristic effect appropriate to the object of his design, rather by just proportions and good details than by unnecessary ornamentation and littleness of parts, thus exhibiting his preference for the "Architecturesque" over the "Picturesque." He took a bold approach to Classical architecture, and was prepared to break its accepted rules by, for instance, omitting the frieze from an entablature, or supporting a portico on an odd number of columns. A favourite innovation was to project the main portico of a house deep enough to form a porte cochère (i.e. a shelter for carriages ).

Bonomi is briefly mentioned in Sense and Sensibility. In the novel, Robert Ferrars says to Elinor (perhaps untruthfully) that his friend Lord Courtland had shown him three house designs by Bonomi and asked him to choose between them, but that Robert had burned them and advised Courtland to build a cottage instead.

Text from Wikipedia, available under the Creative Commons Attribution-ShareAlike License (accessed: 05/05/2020).
Visit the page: Joseph Bonomi the Elder for references and further details. You can contribute to this article on Wikipedia.
People in History Lambton Castle Ignatius Bonomi (1787 - 1870) 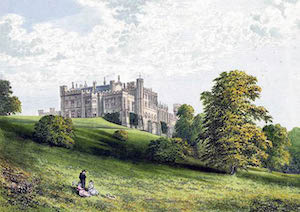