HMS Ocean was a helicopter carrier and amphibious assault ship, and the fleet flagship of the Royal Navy. The ship was launched in 1995 and commissioned in 1998. HMS Ocean's home port was Devonport, and the vessel was also affiliated with the City of Sunderland. The ship and her crew were granted the Freedom of Sunderland in 2005, which allowed them to bear arms as they paraded through the city.[1] The ship was scheduled to retired in Spring 2018, after 20 years in service. HMS Ocean had played a part in the annual Sunderland International Airshow on a number of occasions.

HMS Ocean is an amphibious assault ship, the UK's helicopter carrier and the fleet flagship of the Royal Navy. She is designed to support amphibious landing operations and to support the staff of Commander UK Amphibious Force and Commander UK Landing Force. She was constructed in the mid-1990s by Kvaerner Govan on the River Clyde and fitted out by VSEL at Barrow-in-Furness prior to trials and subsequent acceptance in service. She was commissioned in September 1998 at her home port HMNB Devonport, Plymouth.

An invitation to tender for a new helicopter carrier was issued in February 1992. In February 1993 The Times reported that the carrier faced cancellation due to budgetary constraints. However, at approximately the same time, British forces were engaged in operations in the Balkans, which saw the Royal Fleet Auxiliary's aviation training ship RFA Argus pressed into service as an amphibious transport ship. Arguss accommodation and facilities proved inadequate for the needs of a large Embarked Military Force (EMF), which emphasised the need for a purpose built platform. On 29 March 1993, the defence procurement minister announced that development of the new Landing Platform Helicopter (LPH) was proceeding. Two shipbuilders tendered for the contract – Vickers Shipbuilding and Engineering Ltd (VSEL) and Swan Hunter. On 11 May 1993, the government announced that VSEL had won the contract. The build was to commercial standards, reducing costs significantly and leading to a construction spend of £154 million (£{{Formatprice|}} in ),, comparable to that of a Type 23 frigate. VSEL, a warship manufacturer, sub-contracted the build phase to the commercial Kværner yard in Govan, Glasgow.

The fact that VSEL's bid was £71 million lower than Swan Hunter's was the source of political controversy and led to a National Audit Office investigation to determine whether the competition was fair. The report, published on 29 July 1993, stated that, although VSEL did subsidise its bid, the MoD was right to award the contract to VSEL because the subsidy was much smaller than the difference between the two bids; VSEL's bid was £139.5 million compared to Swan Hunter's £210.6 million. The Times also suggested that the subsidy was as little as £10 million. In anticipation of the report, the Financial Times described the different philosophies adopted by the two bidders; while Swan Hunter viewed the ships as entirely military, "VSEL thought the design was basically a merchant ship with military hardware bolted on." VSEL's decision to sub-contract the build phase took advantage of lower overheads at a civilian yard as well as efficiency drives by its parent, Kværner.

Launched on 11 October 1995, she was subsequently named at Barrow by Her Majesty the Queen on 20 February 1998, prior to delivery to Devonport. In her sea trial, she managed to reach a top speed of ; however, her usual top speed is .

Ocean was designed to provide the amphibious assault capabilities last offered by and . She can deploy an Embarked Military Force (EMF) of a Royal Marines Commando Group from 3 Commando Brigade supported by aircraft and landing craft. The ship's company includes 9 Assault Squadron (9 ASRM) from 1 Assault Group Royal Marines whose primary role is as an Amphibious Assault Squadron. Secondary tasks include boarding parties, beach reconnaissance and providing amphibious knowledge to the ships Command. Besides these roles they have responsibilities within the ship which include firefighting, watchkeeping and security. 9 ASRM is divided into a HQ unit, Landing Craft Troop, Signals detachment, Vehicle Deck Party and Assault Supply Team.

HMS Ocean is also capable of limited anti-submarine warfare activities, supporting afloat training and acting as a base facility for other embarked forces including counter-terrorism units.

The ship can carry four to six Apache AH1 helicopters operated by the Army Air Corps, as well as helicopters of the Royal Air Force, including the larger twin-rotor Chinook. Prior to their retirement, Ocean could transport up to fifteen fixed-wing Harrier aircraft of Joint Force Harrier in the ferry role, but was unable to operate as a fixed-wing aircraft carrier because she lacked the ski jump that is needed to launch a fully loaded Harrier.

For the 2012 London Olympics, she carried an air arm of eight Army Air Corps and Fleet Air Arm Super Lynx helicopters, four from each service, to deploy special forces and conduct other missions in a security role.

Weeks after being commissioned, Ocean was undertaking the warm water element of her first-of-class trials, when she was deployed on short notice to the coasts of Honduras and Nicaragua to provide humanitarian assistance in the aftermath of Hurricane Mitch. In early 1999, Ocean was scheduled to take part in an exercise in the Atlantic, but was diverted to the Mediterranean in readiness for possible deployment to Kosovo.

During 2000, Ocean supported Operation Palliser in Sierra Leone, joining in aiding the suppression of rebel activity with her own embarked force, and providing support facilities for the Spearhead battalion ashore.

On 17 February 2002, a unit of Royal Marines from Ocean accidentally landed on the San Felipe beach in the Spanish town of La Linea instead of Gibraltar, causing a minor diplomatic incident as various media outlets labelled the mistake as an "invasion".

Ocean was part of a large Royal Navy task force deployed for Operation Telic, the UK contribution to the 2003 Iraq War, for which she was awarded a new battle honour "Al Faw 2003". In the helicopter assault role she was accompanied by .

In the summer of 2006, the ship was deployed as part of the task force involved in the Aurora exercises on the eastern seaboard of the United States.

In 2007, Ocean began her first long refit period. This was carried out by Devonport Management Limited at their Devonport Royal Dockyard facility and lasted around 12 months, during which period Ark Royal took over the LPH role. Following this major period of maintenance and upgrading work, Ocean sailed from Plymouth on Wednesday 24 September 2008 to start sea trials. As part of that upgrade, a PyTEC pyrolysising waste recycling unit was fitted.

On 18 February 2009, Ocean sailed from Devonport as part of the Taurus 09 deployment. She was joined on this deployment by the landing platform dock , as the flagship of the group, which included Type 23 frigates and and four ships of the Royal Fleet Auxiliary. This exercise was filmed for the second series of the Channel 5 documentary Warship.

In June 2009, Ocean took part in exercise Bersama Shield with and off the Malay Peninsula.

During the air travel disruption after the 2010 Eyjafjallajökull eruption, Prime Minister Gordon Brown assigned Ocean and other units to rescue stranded travellers and army personnel across the English Channel in Operation Cunningham.

In 2010, she was sent on a multi-purpose deployment. This started with exercise Auriga on the eastern coast of the USA. She then moved to Brazil to conduct an exercise with the Brazilian marines; whilst there a defence co-operation agreement was signed on board. She then crossed the Atlantic to Nigeria to participate in the "Nigeria at 50" presidential fleet review and provide training to the Nigerian navy as part of the African partnership programme. She returned to Devonport in November.

In April 2011, the ship was deployed as the follow on ship for the RN's Response Force Task Group (RFTG) COUGAR 11 deployment. During this deployment, she took part in Exercise Cypriot Lion.

In May 2011, she was detached from the COUGAR 11 deployment of the Response Force Task Group and sent with embarked Apaches to aid operations in Libya along with the attack helicopters aboard the French amphibious assault ship Tonnerre. This was the first time that Apache helicopters were sent directly into action from a Royal Navy ship. Her initial complement of three Apaches was bolstered by a fourth soon after, and later a fifth. The deployment included a large medical team, a sign of the ship's flexibility.

On 4 May 2012, she moored at Greenwich to prepare for her role of providing logistics support, accommodation and a helicopter landing site during the London 2012 Olympic Games. From 24 to 28 May 2012, she visited Sunderland, her affiliated port, and made other port calls before returning to London on 13 July. After Olympic duty, Ocean returned to her home port of HMNB Devonport for a scheduled period of maintenance. The LPH role was provided by until 2014. On 22 July 2014, HMS Ocean took over the helicopter carrier role again, after its 15-month, £65 million refit, replacing , which then returned to its home port Portsmouth for the last time, being decommissioned on 28 August 2014. As part of the Response Force Task Group COUGAR 14 deployment, Ocean participated in exercises off Albania and France.

In April 2015 Ocean took part in Exercise Joint Warrior 15-1 around the coast of Scotland, with Wildcat helicopters landing on her for the first time. She then stopped again in Sunderland where the ship's company exercised their right to the freedom of the city, with more than 300 officers and ratings parading through the city centre.

HMS Ocean will be decommissioned in Spring 2018 as part of cost saving measures with no like-for-like replacement. Under the 2015 Strategic Defence Review, the 65,000-ton Queen Elizabeth-class carriers being assembled at Rosyth, , would be “enhanced” with the addition of new systems to support Royal Marines amphibious operations. However, current plans do not envisage both carriers operating at the same time except in an emergency. In December 2015, she returned to port after Exercise COUGAR 15.

Text from Wikipedia, available under the Creative Commons Attribution-ShareAlike License (accessed: 24/08/2017).
Visit the page: HMS Ocean (L12) for references and further details. You can contribute to this article on Wikipedia.
Ships Sunderland International Airshow 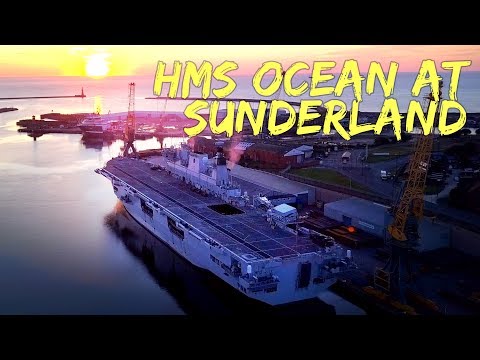 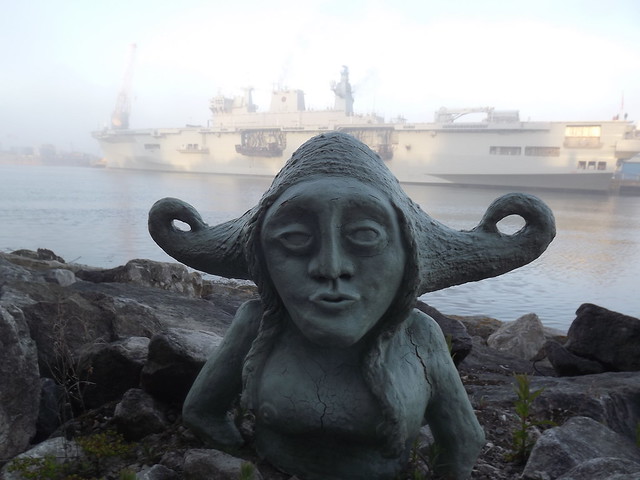 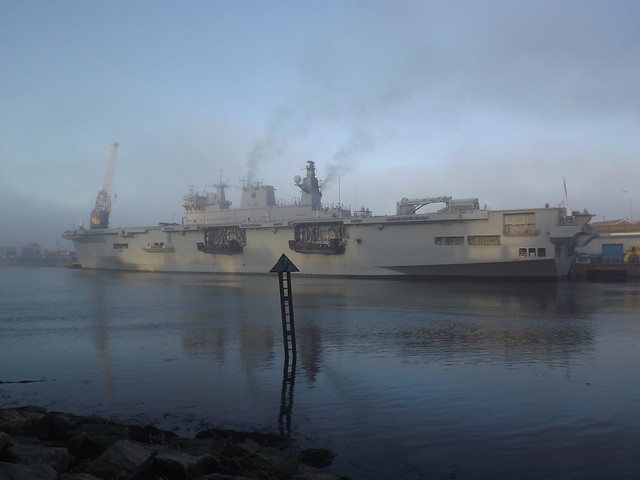 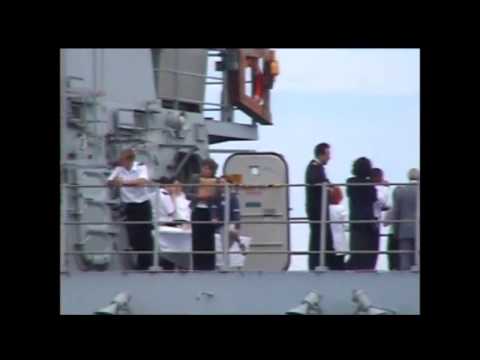 Crowds wave goodbye to HMS Ocean as the warship leaves Sunderland for the last time
- Chronicle Live 11th July, 2017. "Families waving the Union Jack turn out to say farewell to Sunderland's warship after one final visit to her home city..." 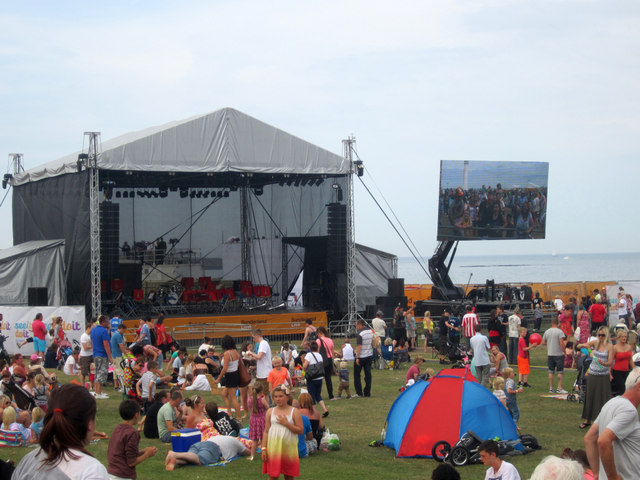 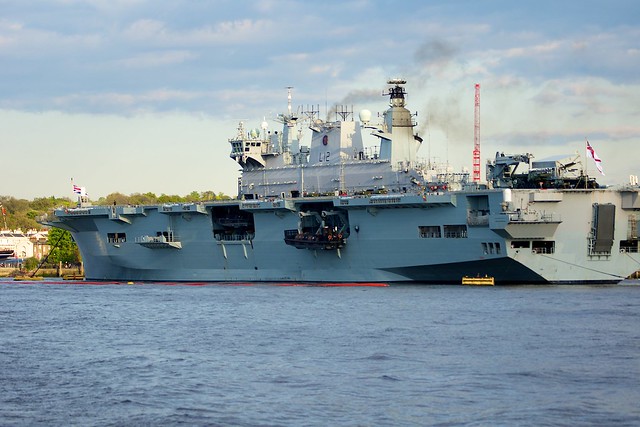 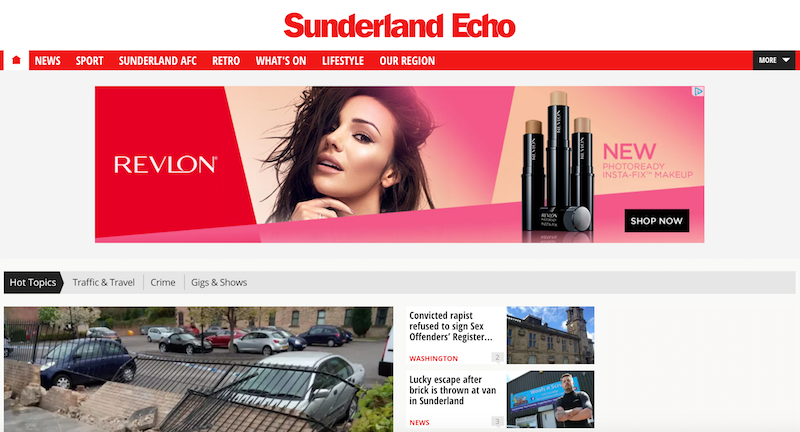 Farewell visit for HMS Ocean as Sunderland's affiliated Royal Navy ship prepares to be decommissioned
- Sunderland Echo 26th June, 2017. "...The Royal Navy’s Fleet Flagship will be alongside the Port of Sunderland from Thursday, July 6, to Tuesday, July 11, to pay tribute to ... 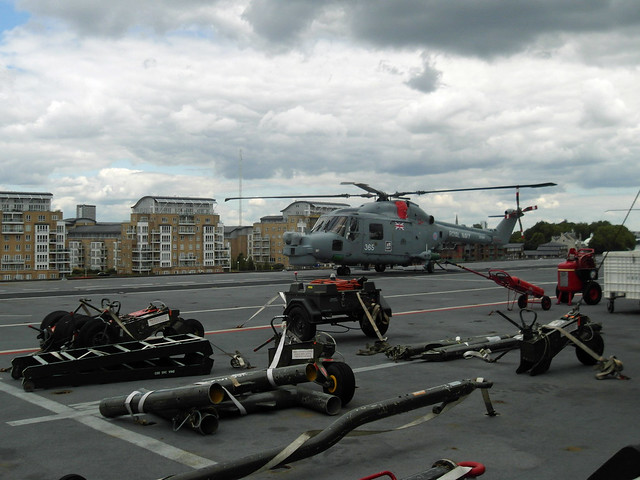 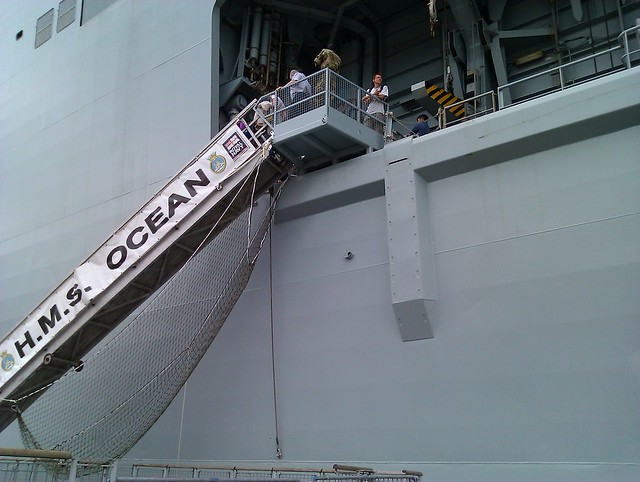 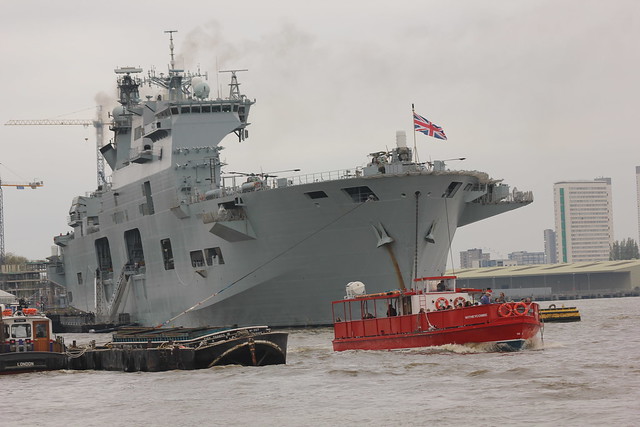 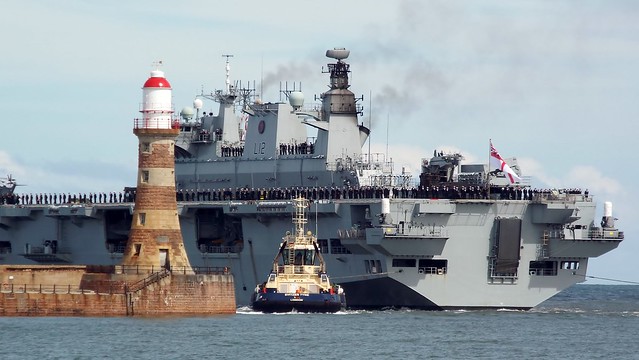 H.M.S Ocean with the tugboat Svitzer Tyne in attendance arrives on the Wear.

Crowds wave goodbye to HMS Ocean as the warship leaves Sunderland for the last time
- Chronicle Live 11th July, 2017. "Families waving the Union Jack turn out to say farewell to Sunderland's warship after one final visit to her home city..."

Farewell visit for HMS Ocean as Sunderland's affiliated Royal Navy ship prepares to be decommissioned
- Sunderland Echo 26th June, 2017. "...The Royal Navy’s Fleet Flagship will be alongside the Port of Sunderland from Thursday, July 6, to Tuesday, July 11, to pay tribute to ...

H.M.S Ocean with the tugboat Svitzer Tyne in attendance arrives on the Wear.