HMS Bulldog was a 'B-class' destroyer built at Wallsend yard of Swan, Hunter & Wigham Richardson Ltd. The ship was launched on the 6th December 1930 and completed in April 1931.[1] From 1936–1939 the Bulldog helped enforce the arms blockade of Spain, during the Spanish Civil War. During the Second World War the Bulldog was used extensively for convoy escort duty. In 1941 the Bulldog captured an Enigma machine and code books from a German submarine. The surrender of the German forces on the Channel Islands was signed on 9 May 1945 aboard Bulldog.[2] Following the ship was broken up in 1946.

HMS Bulldog (H91) was a built for the Royal Navy (RN) from 1929 to 1931. Initially assigned to the Mediterranean Fleet, she was transferred to the Home Fleet in 1936. During the Spanish Civil War of 1936–1939, the ship spent considerable time in Spanish waters, enforcing the arms blockade imposed by Britain and France on both sides of the conflict. Bulldog saw service throughout World War II on convoy escort duty during the Battle of the Atlantic and in the Arctic. Her most notable actions were the capture of a complete Enigma machine and codebooks from the in 1941, and sinking another German submarine in 1944. The surrender of the German garrisons of the Channel Islands was signed on 9 May 1945 aboard Bulldog. Redundant after the war, she was broken up for scrap in 1946.

Bulldog displaced at standard load and at deep load. The ship had an overall length of , a beam of and a draught of . She was powered by Parsons geared steam turbines, driving two shafts, which developed a total of and gave a maximum speed of . Steam for the turbines was provided by three Admiralty 3-drum boilers. Bulldog carried a maximum of of fuel oil that gave her a range of at . The ship's complement was 134 officers and enlisted men, which increased to 142 during wartime.

Bulldog mounted four 45-calibre quick-firing (QF) 4.7-inch Mk IX guns in single mounts, designated 'A', 'B', 'X', and 'Y' from front to rear. She was briefly fitted with a C XIII mount capable of 60-degree elevation for testing purposes. For anti-aircraft (AA) defence, Bulldog had two QF 2-pounder Mk II AA guns mounted on a platform between her funnels. She was fitted with two above-water quadruple torpedo tube mounts for torpedoes. One depth charge rail and two throwers were fitted; 20 depth charges were originally carried, but this increased to 35 shortly after the war began. The ship was fitted with a Type 119 ASDIC set to detect submarines through sound waves beamed into the water that would reflect off the submarine.

By April 1941, the ship's AA armament had been increased when the rear set of torpedo tubes was replaced by a (12-pounder) AA gun. In late 1941, the ship was converted to an escort destroyer with the replacement of her 'A' gun by a Hedgehog anti-submarine spigot mortar. By April 1943, the 'Y' gun had been removed to compensate for the increase to 70 depth charges. Additional depth charge stowage later replaced the 12-pounder high-angle gun. The 2-pounder mounts were replaced by Oerlikon autocannon and two additional Oerlikon guns were also added in the forward superstructure. To combat German E-boats, a QF 6-pounder gun was mounted at the very tip of the bow in 1944.

The ship was ordered on 22 March 1929 from Swan Hunter at Wallsend, under the 1928 Naval Programme. She was laid down on 10 August 1929, and launched on 6 December 1930, as the sixth RN ship to carry this name. Bulldog was completed on 8 April 1931 at a cost of £221,408, excluding items supplied by the Admiralty such as guns, ammunition and communications equipment. After her commissioning, she was assigned to the 4th Destroyer Flotilla with the Mediterranean Fleet until September 1936, when it was transferred to the Home Fleet. Bulldog aided survivors of the 1932 Ierissos earthquake and patrolled southern Spanish waters during the first month of the Spanish Civil War. During her time in the Mediterranean, the ship was refitted at Gibraltar in 1932 and 1935 and in Malta in 1936. Once she returned to Britain, Bulldog was almost continuously under repair or refitting at Chatham Dockyard until 9 January 1937. She remained with the 4th Flotilla until January 1939, and made multiple deployments off the coast of Spain enforcing the embargo until 31 March 1938, when she was refitted, this time at Sheerness Dockyard. The ship escorted the battleship to Scapa Flow in September during the Munich Crisis. Bulldog was briefly assigned to the Gibraltar Local Flotilla in January 1939, until she became plane guard for the aircraft carrier in the Mediterranean in March.

In October she was deployed with Glorious, the battleship and the destroyer as part of a Hunting Group in the Indian Ocean, based at Socotra. She sailed to Malta with Glorious in January 1940 to refit, returning to plane guard duty in March, this time for . In April Bulldog had repairs made to her feed water heater at Devonport, that lasted until 3 May. Bulldog joined the Home Fleet at Scapa Flow and sailed on 9 May, with a force consisting of the cruiser and thirteen destroyers, to search off the mouth of the Skagerrak for German minelayers. The British force was spotted by German E-boats and the minelayers returned to base before they could be intercepted. One of the E-boats torpedoed the destroyer the next day and seriously damaged her. Bulldog towed Kelly to Hebburn for repairs, sustaining damage to her stern structure during the tow, which was repaired by Swan Hunter from 13 to 21 May.

The ship damaged her propellers on 27 May and was under repairs at Chatham Dockyard until 4 June, when she was transferred to the 1st Destroyer Flotilla. She sailed for Le Havre, France on 9 June, to assist in the evacuation of British troops before advancing German troops (Operation Cycle). The next afternoon, she was severely damaged by three hits from German aircraft that knocked out her steering gear. Bulldogs crew was able to temporarily repair the steering gear and the ship reached Portsmouth Dockyard early the following morning. Whilst under repair, she was further damaged by splinters during an air raid on 24 August. Bulldog rejoined the flotilla after her repairs were completed on 2 September.

She was refitted at Cammell Laird from 2 January to 18 February 1941, and was assigned to the 3rd Escort Group for convoy escort duties to and from Iceland. Commander Joe Baker-Cresswell was the ship's captain as well as the commander of the group. Together with the destroyer and the sloop , she damaged on 7 May, while escorting Convoy OB 318 off Iceland. Two days later, the corvette depth-charged U-110, forcing her to the surface. Bulldog and the destroyer fired on, and then closed on the U-boat, whose crew were abandoning the boat. Sub-Lieutenant David Balme of Bulldog led a boarding party that removed the Enigma coding machine and various codebooks. This was of immense help to the Government Code and Cypher School in breaking German naval codes. She took the submarine in tow, but it sank the following morning. Bulldog remained on Atlantic convoy duties until October, when she sailed to Fairfields in Govan, Glasgow, for conversion into an escort destroyer, a process that lasted until February 1942. As part of the conversion, a Type 271 target indication radar was installed above the bridge, that replaced her director-control tower and rangefinder. By 1944 a Type 290 short-range surface search radar was also fitted.

Bulldog was an unattached ship assigned to Western Approaches Command from 10 February 1942, and aided the destroyer after she had collided with the American merchant ship on 31 March whilst escorting Convoy PQ 14 from Eban, Scotland to Reykjavík, Iceland. On 12 April, she rejoined the convoy en route to Murmansk, where they arrived a week later. Beginning on 28 April, she escorted the returning Convoy QP 11 with the same ships. Two days later the light cruiser joined the convoy. Whilst taking position ahead of the convoy later that day, Edinburgh was hit by two torpedoes fired by . The cruiser, heavily damaged and with her steering gear wrecked, was taken in tow for the voyage back to Murmansk. On 1 May the convoy was attacked by the German destroyers Z7 Hermann Schoemann, , and which had been searching for Edinburgh. Commander Maxwell Richmond, Bulldogs captain and commander of the escorts, interposed his four destroyers between the Germans and the merchantmen and drove off the Germans in a three-hour battle during which Bulldog was lightly damaged by shell splinters. She was repaired from 2 June to 14 August, after which she was assigned to the Greenock Special Escort Division. In November she escorted British ships participating in the Allied landings in North Africa (Operation Torch), before returning to Greenock for repairs from 23 November to 14 December.

Bulldog was assigned to the escort for Convoy JW 51B on 20 December, but had to return home for weather repairs on 28 December. After repairs were completed on 16 January 1943, she escorted convoys between Iceland and the UK for the next two months. The ship was under repair at Greenock from 29 March to 22 April, after which she sailed to Freetown for escort duties between Lagos, Nigeria, Freetown and Gibraltar. Bulldog returned home in October for a lengthy refit at Portsmouth Dockyard that lasted from 8 November to 24 May 1944. In June she began escort duties between the River Clyde and the Faeroe Islands, and sank on 26 June.

On 20 August, her hull was badly damaged after a collision with the frigate in Gourock Bay. After repairs at Ardrossan that lasted until 4 September, she resumed local convoy duties between the Faeroes, the Clyde and Scapa Flow until she required major machinery repairs in November. Upon their completion on 30 January 1945, Bulldog escorted convoys between Plymouth and various ports in the Irish Sea for the rest of the war. On 9 May 1945 she sailed to Guernsey where she participated in the Liberation of the German-occupied Channel Islands who formally surrendered to British representatives aboard the ship. The ship was placed in Category 'B' reserve on 27 May at Dartmouth. She was transferred to Rosyth on 27 November and was reduced to Category 'C' reserve on 13 December. Bulldog was approved for scrapping on 22 December and turned over to Metal Industries, Limited on 17 January 1946.

Text from Wikipedia, available under the Creative Commons Attribution-ShareAlike License (accessed: 28/07/2017).
Visit the page: HMS Bulldog (H91) for references and further details. You can contribute to this article on Wikipedia.
Ships Swan Hunter 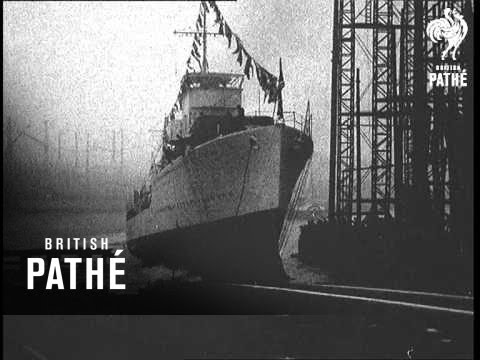 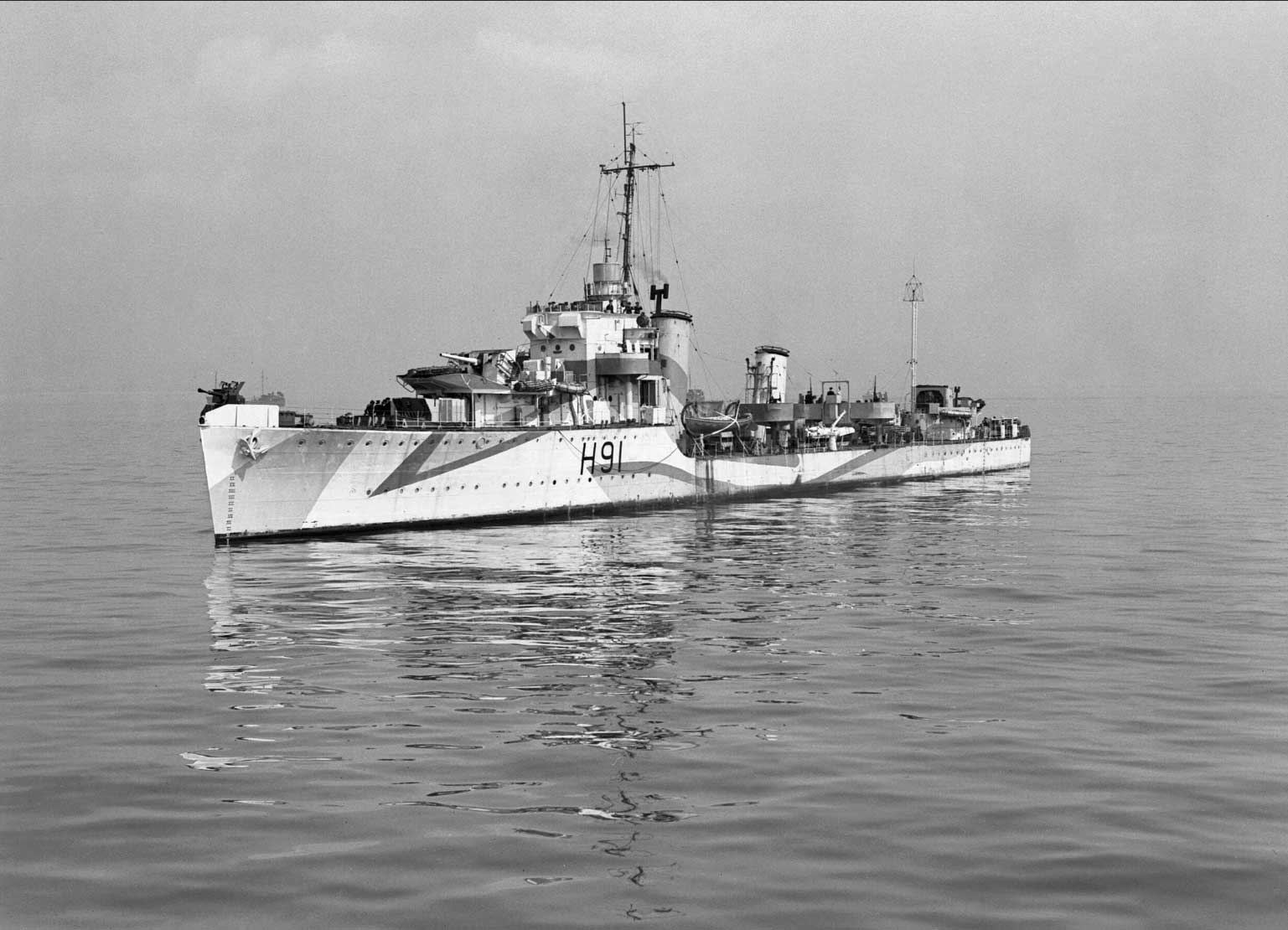 HMS BULLDOG secured to a buoy on the East Coast. Fitted with a bow chaser, 1944
- Photo 17 April 1944 from IWMCollections c/o Wikimedia Commons. Marked as Public Domain. 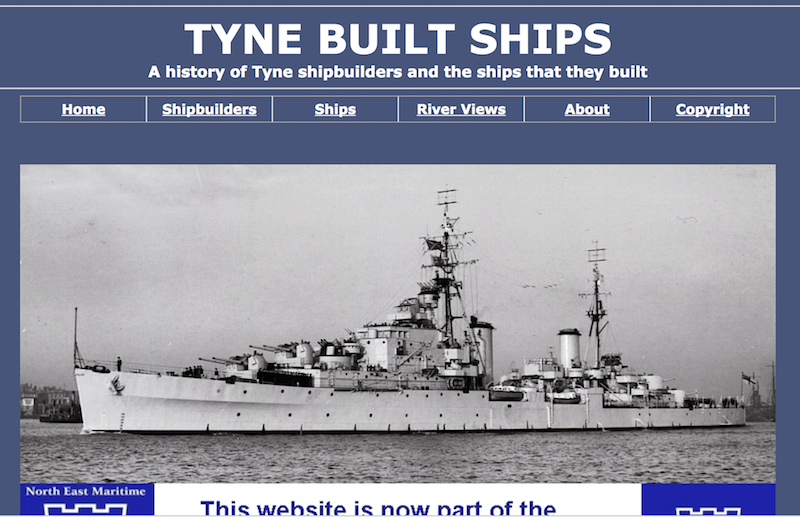 HMS Bulldog (H91)
- "HMS Bulldog (H91) was a B-class destroyer built for the Royal Navy (RN) from 1929 to 1931. Initially assigned to the Mediterranean Fleet, she was transferred to the Home Fleet ... 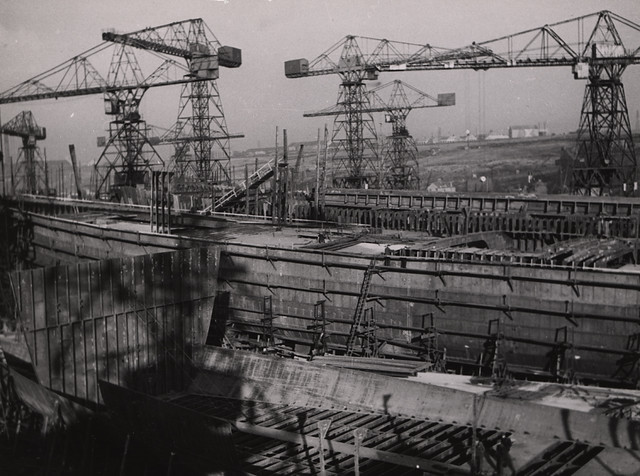 HMS BULLDOG secured to a buoy on the East Coast. Fitted with a bow chaser, 1944
- Photo 17 April 1944 from IWMCollections c/o Wikimedia Commons. Marked as Public Domain.

HMS Bulldog (H91)
- "HMS Bulldog (H91) was a B-class destroyer built for the Royal Navy (RN) from 1929 to 1931. Initially assigned to the Mediterranean Fleet, she was transferred to the Home Fleet ...