Extract from: The Antiquities of Gainford, in the County of Durham: Comprising the Baronial and Ecclesiastical History of that Place, and of Barnardcastle: with Accounts of the Township of Headlam, and Chapelry of Denton... by John Richard Walbran (1846).

On the summit of the hill, almost opposite the house, are numerous swelling hillocks, indicating the remains of a village ; which, in the old maps, is called, but without any apparent authority, "Old Richmond." It was, doubtless, the village of Barford. The outline of the main street, stretching north and south, is sufficiently discernible, and that of several homesteads. The foundations also, of the blacksmith's forge, indicated by the embers, have been turned up by the plough. Several silver coins, of the reign of Queen Elizabeth, which have occasionally been found in digging, shew that it was not altogether deserted at that time ; but nothing now remains save the desolated edifice in which the inhabitants worshipped their God in this mountain — a type of the everlasting truth which had been pro claimed in it. Of its foundation, jurisdiction, or history, I learn nothing. Its architecture indicates the erection to have been about the time of Henry III. ; and it was, probably an un endowed chapel of ease under Gilling, which fell at the dissolution. " John Milverson, of Barford Chapel," occurs as a witness in a deed relative to lands in "West Layton, &c., 24th March, 17th Edward IV., 1477.

The chapel is of an oblong form, and divided midway, at some time not long subsequent to its erection, by a strong wall, so as to form a residence for the priest, at the west end. The portion occupied by the chapel is 32ft. 5in. long, and 16ft. 2in. wide. It is nearly perfect up to the square ; and the massy oaken rafters were remaining in the time of the late Mr. Clarke, who converted one of them into a gate post. The eastern gable is not inelegant. It exhibits three graceful lancet lights, expanding inwards from one to four feet ; surmounted by a small, circular, double-cinquefoil window, with a dog-tooth moulding on its outer member. A slight flat buttress runs up to the sill of the middle lancet light. Each of the corners of the wall is strengthened by a projection of similar substance ; and, on the northernmost a pyramidal cap remained until the memorable wind of January 1839, when it fell ; and, instead of being replaced, was taken, though with a laudable view of preserving it, to form the corner base of .some new iron railing, in front of the mansion. There is an entrance to the chapel in each of the lateral walls. That on the north, 3ft. 5in. wide, is low, obtusely pointed, and near the wall of separation. The other is 4ft. lin. wide, and placed almost opposite. All the lights are of the lancet style. In the south wall three, east of the entrance, are about the size of those facing the east : the other is 2ft. 7in. in its extreme splay. The eastern part of the north side has a similarly pointed light, and a loop hole, expanding in width, respectively, from 1ft. 3in. and 7in., to 4ft. 5in. and 2ft. lin. The piscina, and another recess which appears to have had a trefoil head, remain in the south wall; and, in the angle of the opposite side, is a trefoil-headed recess, 2ft. 6in. high, 2ft. lin. wide, and 1ft. 4in. deep ; which, judging from the four remaining crooks, has been an aumbrye with folding doors, to enclose the sacred utensils. The altar-stone, a slab 6ft. 9in. long, 2ft. 9in. wide, and slightly ornamented on its edge, was thrown down from its place, by a vulgar clown dancing upon it. The wall above has been cut away to receive a sculptured tablet, or painting. Some years ago an opening was made at the south side of the altar, to the depth of six or seven feet; but nothing remarkable was observed. The interior walls have been plastered, and coloured with red paint, in curious devices./ The principal pattern — a kind of checqued-lozenge — appears perfect in the head of one of the south windows ; and a star, such as school boys form by intersecting circles, occurs with a border, in another window jamb.

The apartment which has been occupied by the priest, has been severed from the chapel at an early period; and has been, subsequently, divided again into an upper and lower story. It is 31ft. long; and communicates with the chapel, on the northern side, by a fiat-headed door way, 2ft. 5in, wide. In this portion of the building are two doorways, and one, at least, intended as an entrance to the chapel before its division. It has a semi-circular head ; and has been walled up at an early period. A stone, with two compartments of a lozenge-shaped moulding, which appears to have come from a still earlier building, forms part of the materials. The other door is a little eastward of this. It is under a pointed arch. The jambs have had a slight circular shaft, one capital of which is relieved with a nail-headed moulding. This doorway has, also, been walled up; and a small square window, divided by a thick, plain mullion, inserted in the upper part. The west end has a very long lancet light, 18in. wide, which served both stories. In the south wall is a pointed light, and a round-headed loop hole near it, on the ground-floor alone. The north wall has partly fallen in ; but there are remains of two loop holes, with flat heads in the lower, and as many, but apparently with pointed heads, in the upper story.

There is, in the basement story of this apartment, a fire-place, 4ft. llin. wide, with a projecting funnel, resting on two large and plainly rounded brackets — 15in. wide, and 13in. deep ; and a small one in the upper story : the termination of the chimney forming a pointed turret for the bell. Between the chapel and the house there is a loop hole, expanding to the latter from 3 to 11 inches, which has either been for a confessional, or a means of enabling the priest to make his observations, unseen, on what was occurring in the chapel. The chamber has also communicated with the chapel, by a door on the south side.

The bridge, over the brook between the village above mentioned and the chapel, is of an early pointed date, with ribs and other characteristics of its period. On the brow of the hill, north of the chapel, is one of those tower-shaped, and picturesque Dove-cotes, which are, I believe, peculiar to the county of Durham. It appertains to the manor-house ; and has been erected on this eminence, in conformity with the ancient belief, that pigeons will not settle, or build, but in such elevated situations. 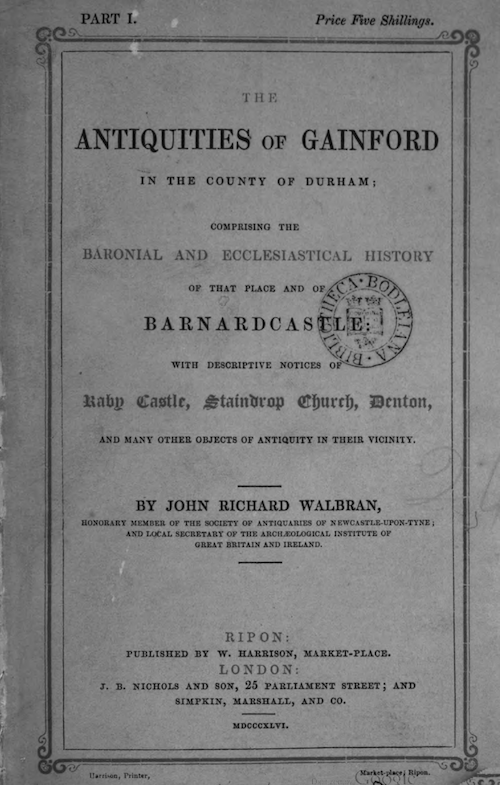 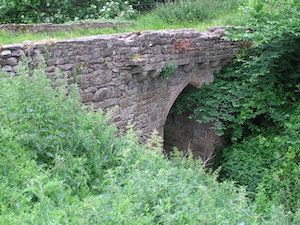