The Interchange station at Heworth brings together Metro, railway and bus.

Heworth Interchange serves the Heworth area of Gateshead, England. There is a station here on the Yellow and the Green Lines of the Tyne and Wear Metro as well as one on the Carlisle to Middlesbrough rail line operated by Northern.

Heworth opened in 1981 as the terminus of the Tyne and Wear Metro. In 1984, the line extended eastwards to South Shields. The railway station had opened on 5 November 1979, with the closure of Felling and Pelaw railway stations. Prior to that, BR passenger trains had run on the southern pair of tracks, now used by Metro services, and for a short period they ran through the completed Metro platforms. For much of the time Heworth was a Metro terminus, trains reversed in the platforms, using the crossovers west of the station in passenger service. Reversals later took place at the new sidings at Pelaw once they had been completed.

Above the four platforms there is a bus station. The services that operate there are mainly operated by Go North East.

This interchange provides connections from the Tyne and Wear Metro to South Tyneside, Sunderland and Washington as well as other areas of Gateshead.

The National Rail side of the station is unstaffed, but there is a Nexus travel centre here (staffed 07:00-18:00 weekdays, 09:00-18:00 Saturdays) which sells rail tickets. Other facilities available include an ATM, newsagents and public telephone. Train running information is offered via timetable posters, digital CIS displays and automated announcements. Step-free access to both Metro and heavy rail platforms is available via ramps.

There is two car parking areas, 1 for short term and 1 long term. Both sites are on metro land but operated by Metropolitan Borough of Gateshead council.

Northern run hourly services (with one or two additional peak hour extras) westbound to Newcastle and eastbound to via Sunderland and . Most westbound trains continue through to and , with a few running all the way to Carlisle. The majority of eastbound trains are extended to . On Sundays, there is an hourly service between Middlesbrough & MetroCentre, plus a single through train to/from between March and early November.

Heworth is served by both Yellow line (St James - South Shields) and Green Line (Airport - South Hylton) routes - each run every 12 minutes during the daytime (Mon-Sat) and 15 minutes in the evenings and all day Sunday.

Text from Wikipedia, available under the Creative Commons Attribution-ShareAlike License (accessed: 02/12/2017).
Visit the page: Heworth Metro Station for references and further details. You can contribute to this article on Wikipedia.
< Pelaw | Tyne & Wear Metro | Felling >
Heworth 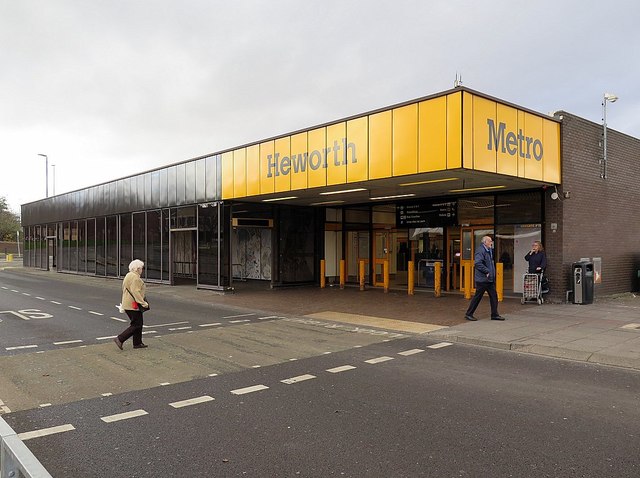