Heugh Lighthouse on the Headland at Hartlepool was built in 1927. There was an earlier lghthouse at this location (1846-1915), which was probably the first successful gas-lit lighthouse in the world, but was taken down during the First World War as it stood in the way of the guns at Heugh Battery. A temporary light on Town Moor was used until 1927 when the current lighthouse was built.

The Heugh lighthouse is a navigation light on The Headland in Hartlepool, in north-east England. The current lighthouse dates from 1927; it is owned and operated by PD Ports. It is claimed that its early-Victorian predecessor was the first lighthouse in the world reliably lit by gas.

Following the establishment of the Hartlepool Dock & Railway company, West Hartlepool quickly grew into a sizeable coal port on the Durham coast. In 1844, mariners tasked with navigating their way into the new docks had expressed concern about the inadequate provision of lights on this dangerous stretch of rocky coastline, and in 1846 the Corporation of Trinity House instructed the harbour authority to make necessary provision.

A lighthouse was promptly built in sandstone, a tapering cylindrical tower high. It was first lit on 1 October 1847, fuelled by natural gas from one of the local coal mines. The main light was visible for 18 miles out to sea.

The old light's demise came about as an indirect result of the German raid on Hartlepool in December 1914. The lighthouse itself was unscathed (though several nearby buildings received severe damage), but it was realised that the tower obstructed the line of fire of the defensive guns of the Headland batteries. It was therefore dismantled in 1915.

As a temporary measure, the light, lantern and lens from the Heugh lighthouse were instead mounted on a wooden lattice structure on the nearby town moor. They remained here until the erection of the new Heugh light in 1927. When the structure was dismantled, the optic (lenses) and light array were saved; they are now on display in the Museum of Hartlepool.

The current lighthouse, of a prefabricated steel construction, is a white-painted cylindrical tower, high. Built not far from the site of the first lighthouse (though without obstructing the line of fire of the guns) it was designed to be able to be dismantled in the event of war, so as not to provide a landmark for enemy gunsights. It was, from the start, electrically-powered and fully automated.

The lighthouse is still in use today, under the management of the local port authority. It displays a white light, flashing twice every ten seconds. One of the adjacent buildings housed a nautophone fog signal, which used to sound three 3-second blasts every 45 seconds. The other building houses radio equipment for HM Coastguard.

Nearby Seaton Carew had a pair of lighthouses for many years. They were decommissioned in the late nineteenth century; years later one of the two was re-erected in Hartlepool Marina as a mariners' memorial.

South Gare Lighthouse stands on a pier head at the opposite end of the bay to the Heugh, marking the southern approach to the River Tees.

Just south-west of the Heugh, the Old or 'Pilots' Pier has been marked by a lighthouse since 1836. The present wooden structure (painted white with two narrow red horizontal stripes) dates from 1899; the lantern is strikingly topped by a rotating radar. It displays a green light (one flash every three seconds) with a white sector indicating the deep-water channel into the Old Harbour and Hartlepool Docks.

Text from Wikipedia, available under the Creative Commons Attribution-ShareAlike License (accessed: 04/12/2016).
Visit the page: Heugh lighthouse for references and further details. You can contribute to this article on Wikipedia.
Hartlepool Headland 1927 Lighthouses First Heugh Lighthouse (1846-1915) 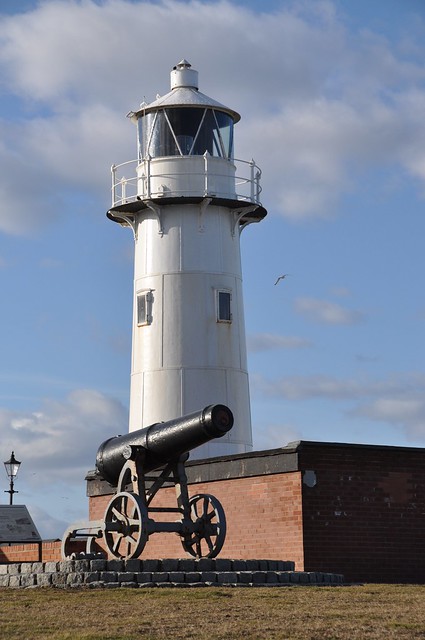 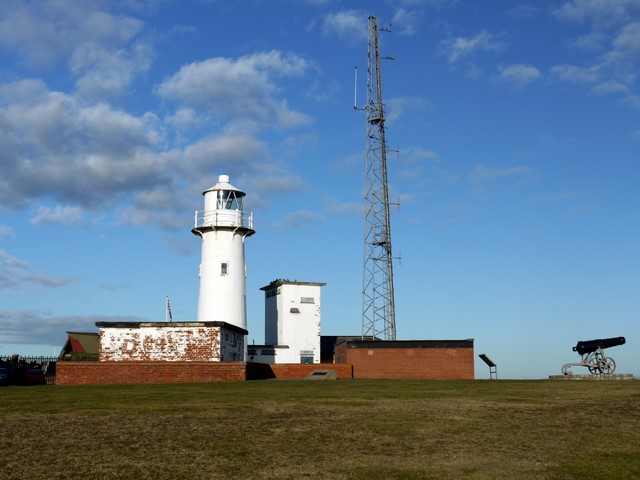