HELSINGTON, a chapelry, in the parish, union, and ward of Kendal, county of Westmorland, 3½ miles (S.W. by S.) from Kendal; containing 310 inhabitants. This place has been for many generations the property of the Strickland family, of whom Sir Walter de Strickland lived here in the reign of King John, and William was bishop of Carlisle in 1400: the male line of the family has been successive and uninterrupted for more than 700 years. Sizergh Hall, the fine old Gothic seat of the Stricklands, stands in the midst of highly fertilized grounds beautifully interspersed with wood, though at the foot of a wild and sterile hill. When it was first erected has not been clearly ascertained; it is supposed to have been at the time of the Conquest; but it is still very perfect, having been frequently repaired and enlarged, and preserves its ancient formidable appearance. It contains many stately apartments, some of which are beautifully wainscoted with richly carved black oak, and adorned with paintings; the dining-room is particularly spacious, and the "Queen's room" is so called from Catherine Parr, consort of Henry VIII., having lodged here after the king's death. In the border wars, the lord of this mansion could bring into the field 290 bowmen and billmen. The present owner is Walter Charles Strickland, Esq., who recently attained his majority.

The township comprises, including roads, 3,250 acres, of which 875 were common land, now inclosed: the high lands, called Helsington barrows, are rocky, but suitable to the growth of wood; the low lands are arable, and are extremely productive. The drainage of the latter, under a local act, was effected at a cost of £14,500; and nearly 200 acres of the high common lands have been planted since January, 1846. The grounds belonging to Sizergh House consist of about 1884 acres, including lands adjoining the domain. The river Kent, the Lancaster and Kendal canal, the Lancaster road to Kendal and Milnthorpe, and the Lancaster and Carlisle railway, all pass through the chapelry. The living is a perpetual curacy, in the patronage of the Vicar of Kendal; net income, £125. The chapel, dedicated to St. John, was founded in 1726, by John Jackson, of Holeslack, who endowed it with an estate. A school is supported by subscription. 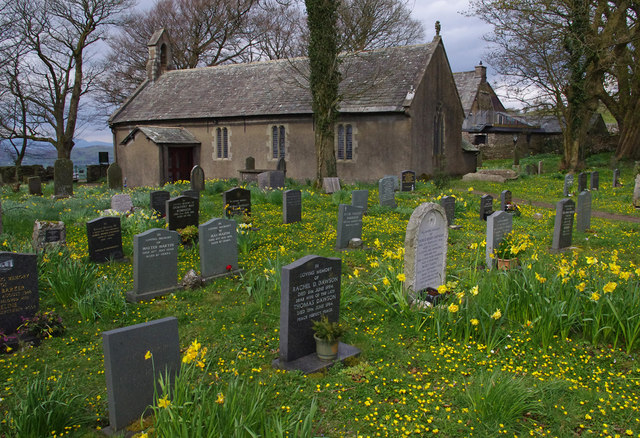 Church of St John, Helsington
- Overview Map Street View St John's Church is the parish church of Helsington, Cumbria. It was built in 1726 and is in an isolated&nbsp;hillside location, about &frac12; mile south-east of ...

Church of St John, Helsington
- Overview Map Street View St John's Church is the parish church of Helsington, Cumbria. It was built in 1726 and is in an isolated&nbsp;hillside location, about &frac12; mile south-east of ...