HAWKSHEAD (St. Michael), a market-town and parish, in the union of Ulverston, hundred of Lonsdale north of the Sands, N. division of the county of Lancaster, 28 miles (N.N.W.) from Lancaster, and 268 (N.N.W.) from London; comprising the townships of Claife, Hawkshead, and Monk-Coniston with Skelwith, and the chapelry of Satterthwaite; the whole containing 2,323 inhabitants, of whom 892 are in the township of Hawkshead. This place probably owes its origin to the Saxons, as the language of that people strongly pervades the dialect of its inhabitants at the present day. The earliest mention of it occurs in some transactions of the abbey of Furness, in the 12th century, at which period it was a chapelry under Dalton-in-Furness: it remained dependent on the abbey till the Dissolution. Hawkshead was constituted a parish in the reign of Elizabeth, by Archbishop Sandys, a native of the place, and was then of much greater extent than it is now, including the present parish of Coulton, which was separated in 1680. In respect of importance it is the fourth town in the district of Furness, and during the existence of the abbey it was governed by a bailiff appointed by the abbots, who dispensed justice for the district, in a court-room over the gateway of a house occupied by some of the monks who officiated in the church, and performed other parochial duties: of this house, which was a quadrangular building, there are still some remains in tolerable preservation. In the reign of Elizabeth the tenants of Hawkshead, in conjunction with those of Coulton, petitioned for the suppression of certain ironworks in High Furness, in order to preserve for the protection of their cattle during the winter, those woods and coppices in the neighbourhood that would otherwise be cut down to supply the furnaces with fuel; and charged themselves with the payment to the queen of £20 per annum, for which the works had been let.

The Town is pleasantly situated near the head of Esthwaite-water, a small lake beautifully indented with richly-wooded promontories, and nearly in the centre of a vale of luxuriant meadows and corn-fields, almost surrounded by the fells of Furness. The borders of the lake are enlivened by villas and farmhouses. The parish is bounded on the north by the river Brathey, which separates the counties of Lancaster and Westmorland; on the east by Windermere lake; on the south by Coulton parish; and on the west by part of Coniston water, and by Yewdale and Tilberthwaite becks. On Priest's Pot, a circular pool at the head of Esthwaite-water, is a floating islet containing trees and shrubs. The hills afford large quantities of excellent slate, and stone for building; and a considerable portion of the former is exported. Many females were employed in spinning yarn; but since the application of machinery to that purpose, the trade has declined, and the wool produced from the numerous flocks which are fed on the neighbouring hills is sold in the fleece, to be used by distant manufacturers. The market is on Monday; the privilege of holding it was obtained in the reign of James I., by A. Sandys and other inhabitants. The fairs are on Easter-Monday, the Monday before Ascension-day, Whit-Monday, and October 2nd, chiefly for cattle and pedlery.

The living is a vicarage, in the patronage of the Crown, in right of the duchy of Lancaster; net income, £164; impropriators, the landowners. The church, a neat structure, advantageously seated on a small knoll rising above the town, was repaired and modernised in the reign of Elizabeth, and contains a monument to the memory of the parents of Archbishop Sandys. The short massy columns, their arches, and some other parts of the original building, yet remain, indicating the Norman style, and countenancing the supposition that the church was founded about the period of the Conquest. The parsonage-house is pleasantly situated at a short distance from the church, on land that retains the name of Walker-ground from its supposed donor, Dr. George Walker, a celebrated Puritan divine of the 17th century, who was born at Hawkshead. A chapel has been erected and endowed at Brathey, and there is another chapel at Satterthwaite; at the hamlet of Hawkshead Hill is a small place of worship for Baptists. The grammar school was founded in 1585, by Archbishop Sandys, who endowed it with lands now producing about £180 per annum. A sum of about £60, arising from benefactions, is yearly appropriated to boarding and clothing a number of boys, selected by the trustees of the grammar school. The Rev. Thomas Sandys, in 1717, bequeathed a collection of books for the use of the school; and in 1816 the Rev. William Wilson left £100, the interest to be distributed in prizes to the scholars. The late Rev. Dr. Wordsworth, master of Trinity College, Cambridge; his relative, the poet; and other distinguished men, received the rudiments of their education in the school.

Claife Township, 1848
- CLAIFE, a township, in the parish of Hawkshead, union of Ulverston, hundred of Lonsdale north of the Sands, N. division of the county of Lancaster, 2 miles (S.S.E.) from Hawkshead; ...

Monk Coniston with Skelwith, Township, 1848
- CONISTON, MONK, with Skelwith, a township, in the parish of Hawkshead, union of Ulverston, hundred of Lonsdale north of the Sands, N. division of the county of Lancaster, 4 miles ... 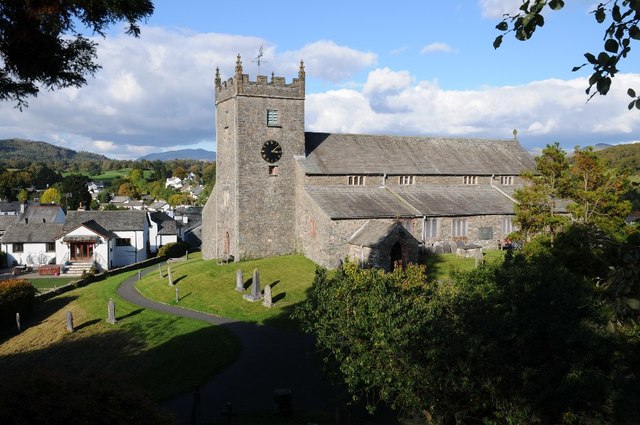 Claife Township, 1848
- CLAIFE, a township, in the parish of Hawkshead, union of Ulverston, hundred of Lonsdale north of the Sands, N. division of the county of Lancaster, 2 miles (S.S.E.) from Hawkshead; ...

Monk Coniston with Skelwith, Township, 1848
- CONISTON, MONK, with Skelwith, a township, in the parish of Hawkshead, union of Ulverston, hundred of Lonsdale north of the Sands, N. division of the county of Lancaster, 4 miles ...

Church of St Michael and All Angels, Hawkshead