Exert from: History and medical treatment of cholera, as it appeared in Sunderland in 1831, by W. Haslewood and W. Mordey.

Nov 7th 11 a.m. - John Crawford, seaman (but has not been at sea for some years), was attacked early this morning with violent sickness and purging of a watery brown fluid, attended with cramps of extremities. He was deadly cold all over; eyes sunk; expression of countenance much altered; tongue moist, rather cold; voice husky; pulse imperceptible at the wrist, appeared in a complete state of collapse. He had immediately a glass of brandy with 3J of laudanum; heat applied to the surface.

Half past 12 p.m. - Expressed himself much better; felt warmer, and could now raise himself in bed; skin becoming moist and clammy; no pulse at the wrist; had retained the brandy; ordered it to be continued.

10 p.m. - Expressed himself better. Ordered mustard poultice to the epigastrium; had 10 grains of calomel, with a mixture of aether and laudanum; to continue a table spoon full of brandy every half hour.

Tuesday 10 a.m. - Was drinking coffee on our entrance; felt himself much better; little sickness or purging; pulse small and just perceptible. Ordered the medicine and brandy to be continued. He continued much the same all day until 11 p.m. when he became much worse; pulse left the wrist; grew much colder. A blister was applied to the epigastrium. He gradually sunk, and expired this day, November 9th.

EXAMINATION OF THE BODY 7 HOURS AFTER DEATH

Countenance placid; skin warm and rather yellow; an eschar was formed over the epigastrium; skin of the hands corrugated; nails blue; muscles tense; tendons drawn; skin and subjacent membrane pitted on pressure.

Chest - Extensive adhesions of the pleura, of old standing, particularly that of the right side; no effusions; lungs gorged with dark blood; bronchial tubes filled with bloody and frothy mucus.

Heart - Pericardium contained a small quantity of fluid: heart natural, rather flabby; right side with the cavae full of black blood, and on pouring out the contents the ventricle still appeared as if covered over with molasses. On laying open the abdomen, peritoneum rather dry; no effusion; omentum highly vascular;  small intestines exceedingly livid, especially the ilium; no offensive smell; liver healthy; gall bladder distended, and its duct firmly contracted, so as to prevent any bile flowing on pressure; bile of a thick consistence of a dark olive colour, almost black.

Stomach - External appearance natural: on cutting it open it contained about a quart of dark brown fluid, smelling of brandy; mucous coat pale yellow, excepting at its pyloric extremity, where it was exceedingly vascular; the same membrane was soft, thickened, and easily removed by the nail, excepting at the pyloric extremity, where it was much firmer. Duodenum contained a mucilaginous brown fluid; mucous coat thickened and soft.

Jejunum full of brown fluid; ilium, mucous coat completely softened, of a dark red colour, and containing a reddish mucus; appeared decidedly inflamed, and became darker towards the caput coecum; coecum and colon also dark; the descending portion of the colon natural as to size, but at the commencement of the transverse portion it became suddenly contracted, and continued so down to the anus, particularly at the sigmoid flexure, where it contained a watery brown fluid.

Spleen natural; urinary bladder firmly contracted against the pubes, and unyielding on pressure; quite empty.

The head was not allowed to be examined, as they were on the point of burying the body.

The wife of this patient had diarrhea, with cramps and prostration of strength, during her husband's illness: she recovered under the administration of opium and calomel. 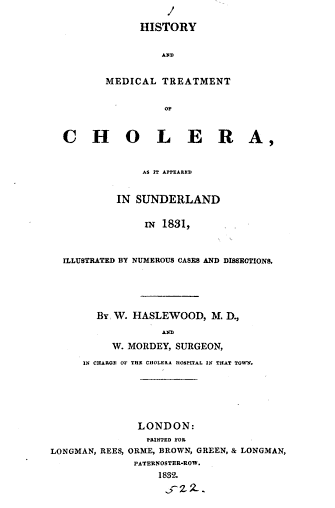 History and medical treatment of cholera, as it appeared in Sunderland in 1831, by W. Haslewood and W. Mordey
- Book from 1832 digitised by Google and available as a free eBook, 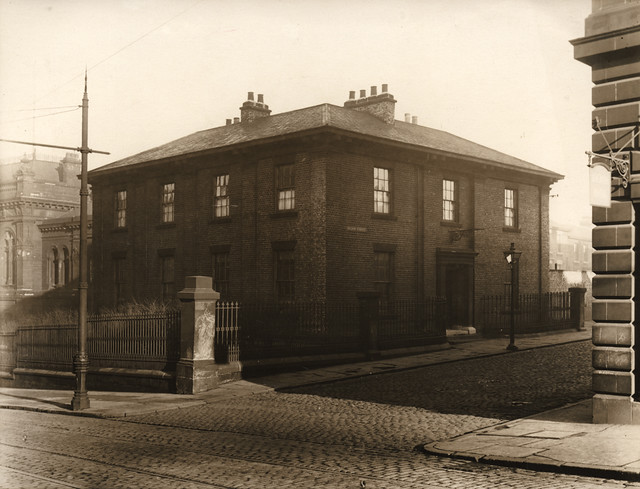 Cholera
- Cholera is caused by infection with the bacterium Vibrio cholerae. It can result in diarrhoea and can rapidly lead to severe dehydration and death. History: Cholera became a worldwide problem ...

History and medical treatment of cholera, as it appeared in Sunderland in 1831, by W. Haslewood and W. Mordey
- Book from 1832 digitised by Google and available as a free eBook,

Cholera
- Cholera is caused by infection with the bacterium Vibrio cholerae. It can result in diarrhoea and can rapidly lead to severe dehydration and death. History: Cholera became a worldwide problem ...