Charles William Vane, 3rd Marquess of Londonderry (18 May 1778 – 6 March 1854), born Charles William Stewart and raised to the peerage as Baron Stewart in 1814, was a British soldier, politician and nobleman.

Charles Stewart (as he was before 1814) was educated at Eton and was commissioned into the British army in 1794. He saw active service in Flanders and Ireland before being elected a member of the Irish House of Commons. In 1803 he was aide-de-camp to King George III and four years later became Under-Secretary of State for War and the Colonies. He fought in the Peninsula War under both Sir John Moore and Sir Arthur Wellesley (who became the Duke of Wellington).

In 1810 Stewart was appointed Envoy Extraordinary to the Prussian Court in Berlin and remained in that position until end of the war in 1814. In 1815 he was appointed British Ambassador to Vienna (a post he was to hold for nine years), and was at the Congress of Vienna with his half brother Lord Castlereagh (the senior British plenipotentiary).

Lord Stewart succeeded his half-brother as 3rd Marquess of Londonderry in 1822. The following year he was created Earl Vane and Viscount Seaham. From 1823 he was Governor of County Londonderry and was appointed Lord Lieutenant of Durham in 1842. He was made a Knight of the Garter in 1853, and died a year later at Londonderry House.

Born in Dublin, Charles Stewart (as he then was) was the only son of Robert Stewart, 1st Marquess of Londonderry, by his second wife Lady Frances, daughter of Charles Pratt, 1st Earl Camden. Robert Stewart, Viscount Castlereagh, was his half-brother. Charles Stewart was educated at Eton, and at the age of 16 was commissioned into the British Army as a lieutenant. He saw service in Flanders in 1794, and was lieutenant colonel of the 5th Royal Irish Dragoons by the time he helped put down the Irish Rebellion of 1798. Two years later he was elected to the Irish House of Commons as Tory representative for Thomastown, County Kilkenny, and after only two months exchanged this seat for that of Londonderry County. He sat for the latter constituency until the Act of Union in 1801, and then represented Londonderry in the British House of Commons until 1814.

By the time of the Great Irish Famine in the 1840s, Londonderry was one of the ten richest men in the United Kingdom. He owned land across Ulster in addition to property in Britain. While many landlords made efforts to mitigate the worst effects of the famine on their tenants, Londonderry was criticised for meanness: he and his wife gave £30 to the local relief committee but spent £150,000 renovating their Irish home.

In 1803 Stewart was appointed aide-de-camp to King George III, and four years later became Under-Secretary of State for War and the Colonies. During the Corunna Campaign of 1808–1809 he commanded a brigade of cavalry, and played a prominent role in the cavalry clash of Benavente. In April 1809 he was made Adjutant General to Sir Arthur Wellesley (later the Duke of Wellington) with the British forces fighting in the Peninsular War, a post in which he distinguished himself, particularly at the battles of Busaco and Talavera. He received the thanks of Parliament in 1810, and on 20 November 1813 was made Colonel of the 25th Light Dragoons, becoming a Knight of the Bath that same year. Until the end of the war he was Envoy Extraordinary and Minister Plenipotentiary to Berlin, and was also Military Commissioner with the allied armies, being wounded at the Battle of Kulm.

The recipient of numerous foreign honours, Stewart was also, in 1814, ennobled as Baron Stewart, of Stewart's Court and Ballylawn in the County of Donegal. That same year he received honorary degrees from Oxford and Cambridge, was admitted to the Privy Council, and was appointed a Lord of the Bedchamber to the King. He was also made Ambassador to Vienna, a post he held for nine years, and was at the Congress of Vienna with his half brother Lord Castlereagh as one of the British plenipotentiaries, where, according to the renowned historian Adam Zamoyski in his book Rites of Peace: The Fall of Napoleon and the Congress of Vienna, he made a spectacle of himself with his loutish behaviour, being apparently rather often inebriated, frequenting prostitutes quite openly and once even starting a fist fight in the middle of the street with a Viennese coach driver after he punched the coachman's horse.

His first wife was Lady Catherine Bligh, daughter of the 3rd Earl of Darnley, whom he married in 1804 at St George's, Hanover Square; she was three years older than he. She died during the night of 10–11 February 1812, of fever following a minor operation, while her husband was on active service in the Peninsula.

Lord Stewart married his second wife Lady Frances Anne Vane-Tempest, daughter and heiress of Sir Henry Vane-Tempest, on 3 April 1819 at her mother's house on Bruton Street, Mayfair. He later took her surname of Vane in 1829, by royal licence, and used his new bride's immense wealth to acquire the Seaham Hall estate in County Durham with a view to developing the coal fields there. He also built the harbour at Seaham, to rival nearby Sunderland.

The family also used their new-found wealth to redecorate their main country seat in Ireland, Mount Stewart, and bought Holderness House on London's Park Lane, which they renamed Londonderry House.

Lord Stewart succeeded his half-brother as 3rd Marquess of Londonderry in 1822. The following year he was created Earl Vane and Viscount Seaham, of Seaham in the County Palatine of Durham, with remainder to the heirs male of the body of his second wife.

Governor of County Londonderry from 1823, Londonderry was appointed Lord Lieutenant of Durham in 1842 and the following year became Colonel of the 2nd Regiment of Life Guards. He was finally made a Knight of the Garter in 1853, and died a year later at Londonderry House. Scrabo Tower in Newtownards, County Down was erected in his memory.

Through his daughter Lady Frances, Lord Londonderry was the great-grandfather of Winston Churchill.

Text from Wikipedia, available under the Creative Commons Attribution-ShareAlike License (accessed: 07/05/2017).
Visit the page: Charles Vane, 3rd Marquess of Londonderry for references and further details. You can contribute to this article on Wikipedia.
People in History Seaham Hall Wynyard Hall Statue of the 3rd Marquis of Londonderry Seaham Colliery (1849-1988) Seaham Harbour

The 3rd Marquis of Londonderry (and 2 monkeys) 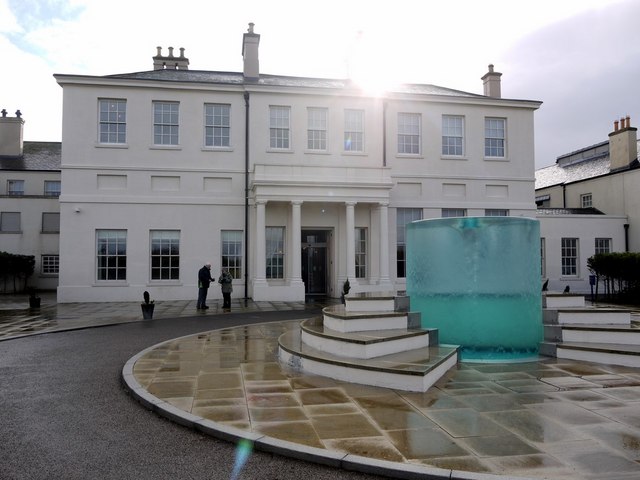 The 3rd Marquis of Londonderry (and 2 monkeys)

Statue of the 3rd Marquis of Londonderry, Durham